TREND WATCH: South Korea has opened up a clear lead as the world’s most research-intensive economy, according to figures released last week by the Paris-based Organisation for Economic Co-operation and Development (OECD).

In 2014, South Korea invested 4.29% of its gross domestic product (GDP) in research and development (R&D) — stretching ahead of Israel, which is ranked second with a 4.11% investment. 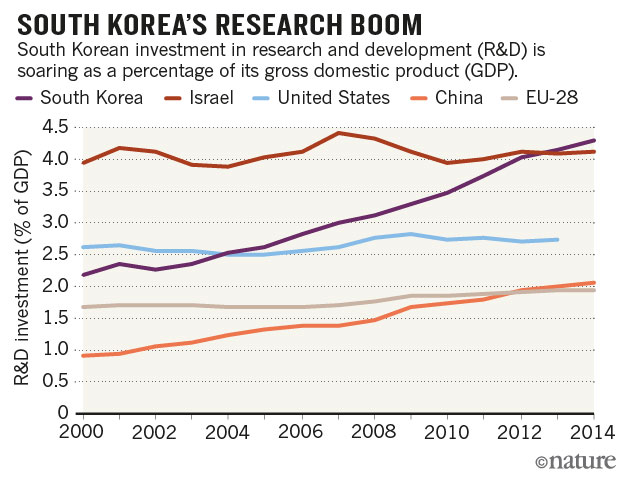 The increase in South Korea is largely due to rising industrial investment, and the country is aiming to spend 5% of its GDP on research by 2017.

China also continues to pour more into research. By 2014, the proportion of its GDP devoted to R&D had reached 2.05%, pulling away from the European Union, which invested 1.94%.

In absolute terms, China’s R&D spending is about one-third lower than that of Europe's. But the OECD says that when China’s lower wages are taken into account, the nation’s R&D purchasing power has — for the first time — surpassed that of the European Union.

With a similar adjustment for purchasing power, China's 2014 spending on research is already 80% of that of the United States' in 2013, the latest year for which figures are available. Forecasters suggest that China will surpass the United States in R&D spending by the end of this decade.