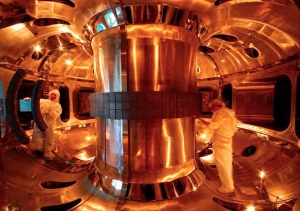 The K-STAR nuclear fusion reactor, in Daejeon, South Korea, will be succeeded by a larger, more ambitious project.

South Korea has embarked on the development of a preliminary concept design for a fusion power demonstration reactor in collaboration with the US Department of Energy's Princeton Plasma Physics Laboratory (PPPL) in New Jersey.

The project is provisionally named K-DEMO (Korean Demonstration Fusion Power Plant), and its goal is to develop the design for a facility that could be completed in the 2030s in Daejeon, under the leadership of the country’s National Fusion Research Institute (NFRI).

South Korea is already developing the Korea Superconducting Tokamak Advanced Research (K-STAR) project and contributing to ITER, the €15-billion (US$20-billion) experimental reactor being built in Cadarache, France, under the auspices of an international collaboration. K-DEMO is intended to be the next step toward commercial reactors and would be the first plant to actually contribute power to an electric grid.

“It is a very smart strategy to take advantage of the experience gained in constructing ITER and to immediately proceed to construct a fusion power plant like K-DEMO,” says Stephen Dean, president of Fusion Power Associates, an advocacy group in Gaithersburg, Maryland.

K-DEMO will serve as prototype for the development of commercial fusion reactors. According to the PPPL, it will generate “some 1 billion watts of power for several weeks on end”, a much greater output than ITER's goal of producing 500 million watts for 500 seconds by the late 2020s.

In early 2012, the South Korean Ministry of Education, Science and Technology announced that developing technologies to build K-DEMO would be a priority for the next 10 years, establishing the know-how to permit the construction of a commercial fusion power plant between 2022 and 2036. The government also announced that it planned to invest about 1 trillion won (US$941 million) in the project. About 300 billion won of that spending has already been funded, according to a source within the ministry. The government expects the project to employ nearly 2,400 people in the first phase, which will last throughout 2016.

Robert Goldston, who was the director of the PPPL when it helped with the initial design of K-STAR, believes that the K-DEMO project is feasible, considering South Korea's commitment to its previous project. "There was a financial crisis in Asia right in the middle of the K-STAR project, but the government and fusion scientists were steady and serious about getting the job done, despite lots of hardship," he says. "My sense is that the Korean team, at all levels, is very dedicated to a steady pace even in adversity — and there is always adversity in big projects."

Lee Gyung-Su, a research fellow at NFRI and a former chairman of the ITER Management Advisory Committee, says that Korea is desperately in need of the energy that fusion could provide. “Korea has a lack of energy resources,” he says. “The population density is high and the country consumes so much energy," Lee adds, "we have a different perspective on fusion energy compared to the United States.”

ITER has experienced repeated delays and cost increases, prompting some critics to question whether the project will ever be completed. "It is already obvious that future commercial-size machines will be too large and costly, and too expensive to operate, to generate competitive energy," says Thomas Cochran, a consultant for the Natural Resources Defense Council in Washington DC. He adds that he believes South Korea should spend its resources on technologies that have the potential to provide a nearer-term impact on carbon emissions and climate change.

Lee acknowledges the criticism, but says that most of ITER's issues were of a management, rather than a technical nature. “The schedules are now mostly fixed and sorted out,” he says. “And risks always exist when it comes to a new finding in science, and the investment on the research and development has been made based on the estimation of such risks.”

Moreover, Lee adds, “we are willing to take risks, and need to innovate to survive".