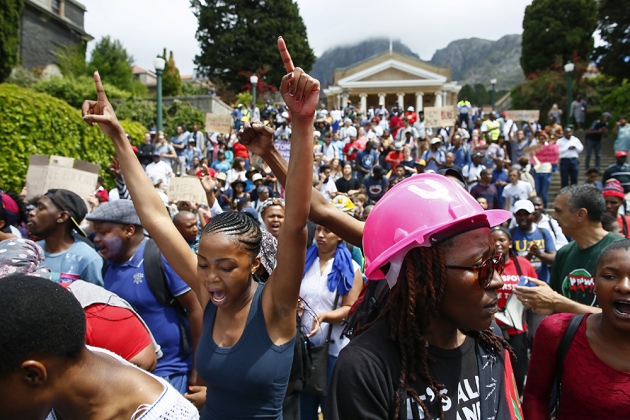 While student protests about proposed fees hikes are ongoing, academics warn of a funding crisis.

More than 1,200 South African academics are warning that the country's university system is at a tipping point as a result of chronic underfunding.

The letter, sent on 11 August and also published in the national weekly newspaper the Mail & Guardian on 15 August, calls on the government to address the “funding crisis” in higher education.

“The core functions of universities are being put under threat,” the letter says. “We have reached a limit. We simply cannot weather any further cuts without jeopardizing the academic project.”

It comes amid a backdrop of student protests at rising tuition fees, strained university resources and a government inquiry into free undergraduate education — which critics say South Africa cannot afford. The country is in austerity, with an economic growth forecast of 0% for the year.

Student protests against a proposed 6.3% fee hike have already led to the closure of campuses at the University of KwaZulu-Natal and Mangosuthu University of Technology earlier this month.

“We're at a tipping point. If the current trajectory continues and the state does not intervene, then we're going to see a period of austerity which will undermine our public universities," warns Noor Nieftagodien, a historian at the University of Witwatersrand in Johannesburg.

He coordinated the open letter with colleague Kelly Gillespie at the School of Social Sciences in response to budget cuts at the school, with the hope of engaging the wider academic community. “Academics have tended to respond to these issues from their institutional base. We wanted to get as many academics as possible, irrespective of institution, geography and discipline,” he says.

South Africa's university system is funded by government subsidies, student fees, research contracts and investments. The latest figures show that it cost about 60.6 billion rands (US$4.3 billion) in 2014.

But the government's portion of this has been steadily declining for more than a decade — whereas student numbers have almost tripled from 360,250 to 983,698 over the past 22 years. In 2000, government grants covered about 49% of university income, falling to about 40% by 2009.

To make up the shortfall, universities have increased student fees each year for more than a decade. This resulted in the #FeesMustFall student protests last year after universities tried to raise fees by 10–12%.

The government agreed a zero fee increase in 2016. But Ed Rybicki, a virologist at the University of Cape Town who signed the letter, says budgets are getting tighter, in part thanks to this.

Saleem Badat, a programme director at philanthropic organization the Mellon Foundation in New York and former head of Higher Education South Africa says he has "grave concerns" about another fee freeze in 2017. “I fear it may lead to the slow demise of South African universities,” he says.

Compounding the issue, at some universities, the management agreed to student demands to in-source all workers, costing hundreds of millions of rands annually.

The University of Cape Town put out a call for voluntary early retirement and severance in May this year to help cut costs.

All this may have an impact on research.  “Anything that potentially could jeopardize the sustainability of the university system has a direct implication in terms of our ability to generate new knowledge and increase research,” says Molapo Qhobela, head of the National Research Foundation in Pretoria, which funds the majority of the country's research.

Khaye Nkwanyana, spokesman for the Department of Higher Education and Training in Pretoria, says he would “see if any officials had the appetite to respond” to media questions about the open letter. The department had not responded by the time of writing.