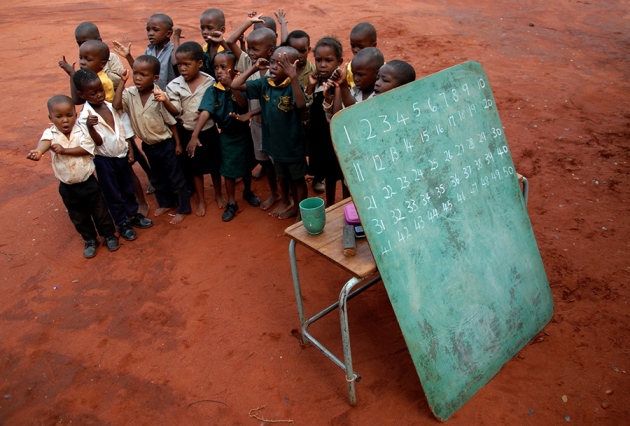 School-children in Limpopo, a rural area that is the site of one of South Africa's existing demographic surveillance studies.

South Africa's government has announced that it will expand the country’s existing demographic studies to create a project that will be the largest of its kind in Africa — tracking the health, income, and educational attainment of around 1% of South Africa’s population.

The Department of Science and Technology estimates that it will put 264 million rand (US$19 million) into the demographic project over the next five years, which will eventually cover at least half a million people. It has secured the funding for its first three years; the rest will need to be allocated in future government budgets.

If the study can be sustained in the long term, researchers hope that the data will help them to track efforts to curb major health problems such as HIV and tuberculosis, and to monitor emerging lifestyle-related threats such as cancer and diabetes. The department intends for the survey to run for decades, following people from the cradle to the grave and monitoring inter-generational trends.

Long-term demographic studies have played an important part in charting disease patterns. One survey that began in 1948 in Framingham, Massachusetts, led to the discovery of cardiovascular disease risk factors such as smoking and diabetes, and has allowed scientists to study inter-generational disease patterns.

But in Africa, as in many other parts of the developing world, such long-term projects have been neglected in favour of focusing on health emergencies such as HIV or Ebola, says Glenda Gray, president of the South African Medical Research Council.

“You never get your head above water to plan for the future,” she says. She thinks that the new project will change that.

South Africa has had three demographic surveillance projects running since the mid-to-late 1990s, based in Mpumalanga and Limpopo in the northeast, and KwaZulu-Natal on the east coast. These have been able to track trends such as a growth in life expectancy as the country rolled out antiretroviral drugs to fight the HIV epidemic. But the long-term sustainability of such studies — which have been funded by non-governmental donors — is a perennial concern, says Kobus Herbst, deputy director of the African Health Research Institute, based in Durban, which runs the study in KwaZulu-Natal. So the government’s investment is particularly welcome, he says.

From rural to urban

All the existing surveillance projects are in rural areas, providing only a narrow view of national population trends, says Gray. “The rural sites have been critical for understanding things like how antiretroviral rollout plays out in districts,” she says. But they don’t catch emerging patterns of disease linked with modern city life, driven by factors such as pollution, work-related stress and dietary changes. Of the four new surveillance nodes in the planned network, three will be based in South Africa’s biggest cities: Cape Town, Johannesburg and Durban. 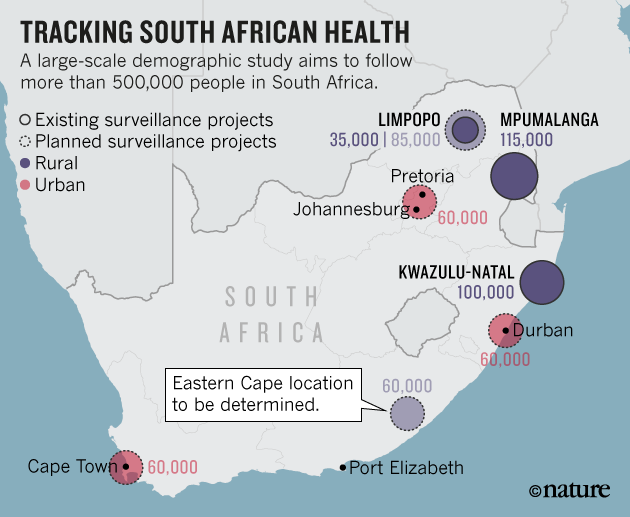 The existing surveys already cover around 250,000 people, but each collects different types of data, so their measurements cannot be compared or integrated together. During the first three years, the surveys will be linked up, and the Limpopo one will be expanded. By the end of the three-year period, a total of 300,000 people should be included in the project, says Herbst. The target of 500,000 people will be reached, hopefully, in five years' time, he says.

The government funding will cover the full health and socio-demographic surveys, as well as fund linkages to national health records and the collection of dried blood spots from adult participants once a year for HIV testing, Herbst says. To do more — such as sequence DNA — funding will be sought from external donors.

Linda Fried, an epidemiologist who is dean of Columbia University’s Mailman School of Public Health in New York City, thinks that the surveys will not only allow South Africa to develop its science base but also attract international investment.

The programme was launched on 4 October by South African science minister Naledi Pandor, at a conference to plan out South Africa’s first road map for national research infrastructures. In addition to the demographic project, the road map launched this week includes plans for a nuclear-medicine research facility dedicated to drug development and clinical research, a solar-research facility to demonstrate photovoltaic technologies, and a new hub to coordinate efforts to protect the country’s natural-history collections.