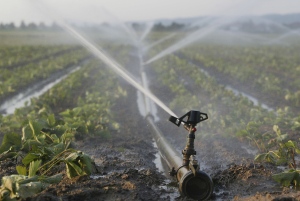 Human water use, for example in irrigation, makes a substantial contribution to sea-level rise.

Climate change, with its associated melting ice caps and shrinking glaciers, is the usual suspect when it comes to explaining rising sea levels. But a recent study now shows that human water use has a major impact on sea-level change that has been overlooked.

During the latter half of the twentieth century, global sea level rose by about 1.8 millimetres per year, according to data from tide gauges. The combined contribution from heating of the oceans, which makes the water expand, along with melting of ice caps and glaciers, is estimated to be 1.1 millimetres per year, which leaves some 0.7 millimetres per year unaccounted for. This gap has been considered an important missing piece of the puzzle in estimates for past and current sea-level changes and for projections of future rises.

It now seems that the effects of human water use on land could fill that gap. A team of researchers reports in Nature Geoscience that land-based water storage could account for 0.77 millimetres per year, or 42%, of the observed sea-level rise between 1961 and 2003. Of that amount, the extraction of groundwater for irrigation and home and industrial use, with subsequent run-off to rivers and eventually to the oceans, represents the bulk of the contribution.

Taikan Oki, a global hydrologist at the University of Tokyo and an author on the paper, says that he was initially “astonished” at how well the team’s estimates of terrestrial water usage filled the deficit between the observed sea-level rise and what was accounted for by thermal water expansion and melting ice. “I didn’t expect that terrestrial water storage had such a big impact on sea level,” says Oki. And, he adds, “I didn’t expect that human extraction of groundwater would matter so much”.

Depletion of groundwater reserves has more than doubled in recent decades as a result of population growth and the increased demand on groundwater reservoirs for drinking water and the irrigation of croplands. Most of the water pumped up from deep pools is not replenished; it evaporates into the air or flows into river channels, feeding into the seas. Artificial reservoirs, such as the Hoover Dam on the Colorado River and the Three Gorges Dam on the Yangtze River in China, have the opposite effect, locking up water that would otherwise flow into the seas. Scientists once speculated that the effects cancelled each other out, but this study and other recent ones have shown that groundwater depletion has a larger net effect.

“The terrestrial contribution to sea-level rise is something that the sea-level community has to reckon with and really take into account,” says Marc Bierkens, a hydrologist at Utrecht University in the Netherlands. A study by Bierkens and his colleagues also found that groundwater depletion contributes significantly to sea-level rise2. But they concluded that the contribution of groundwater use to global sea-level change was markedly lower, increasing from 0.035 millimetres per year in 1900 to just 0.57 millimetres per year in 2000.

Both teams used models to simulate the contribution from groundwater extraction, but Bierkens’ team relied on reported data whereas Oki’s team computed the total amount of groundwater pumped around the world and cross-checked its findings in certain regions. Each team acknowledges that its simulations have limitations and says that more on-site measurements of groundwater use are needed.

Nevertheless, the message is clear, says Yadu Pokhrel, a postdoctoral researcher in global hydrology at Rutgers University in New Jersey and lead author of the latest study. “When people pump groundwater, they may think it’s only having local effects. But there are huge implications. If we think about the future, what will happen if we use groundwater in the same way as we are doing today? That’s a question we have to consider if we don’t think of some kind of proper management of water resources.”