Different stories are unfolding at the two poles of our planet. In the Arctic, more than half of the summer sea ice has disappeared since the late 1970s1. The steady decline is what global climate models predict for a warming world2. Meanwhile, in Antarctic waters, sea-ice cover has been stable, and even increasing, for decades3. Record maxima were recorded in 2012, 2013 and 2014 (ref. 4).

So it came as a surprise to scientists when on 1 March 2017, Antarctic sea-ice cover shrank to a historic low. Its extent was the smallest observed since satellite monitoring began in 1978 (see ‘Poles apart’) — at about 2 million square kilometres, or 27% below the mean annual minimum.

Researchers are struggling to understand these stark differences5. Why do Antarctica’s marked regional and seasonal patterns of sea-ice change differ from the more uniform decline seen around most of the Arctic? Why has Antarctica managed to keep its sea ice until now? Is the 2017 Antarctic decline a brief anomaly or the start of a longer-term shift6, 7? Is sea-ice cover more variable than we thought? Pressingly, why do even the most highly-rated climate models have Antarctic sea ice decreasing rather than increasing in recent decades? We need to know whether crucial interactions and feedbacks between the atmosphere, ocean and sea ice are missing from the models, and to what extent human influences are implicated6.

What happens in the Antarctic affects the whole planet. The Southern Ocean has a key role in global ocean circulation; a frozen sea surface alters the exchange of heat and gases, including carbon dioxide, between ocean and atmosphere. Sea ice reflects sunlight and influences weather systems, the formation of clouds and precipitation patterns. These in turn affect the mass of the Antarctic ice sheet and its contribution to sea-level rise. Sea ice is also crucial to marine ecosystems. A wide range of organisms, including krill, penguins, seals and whales, depend on its seasonal advance and retreat. 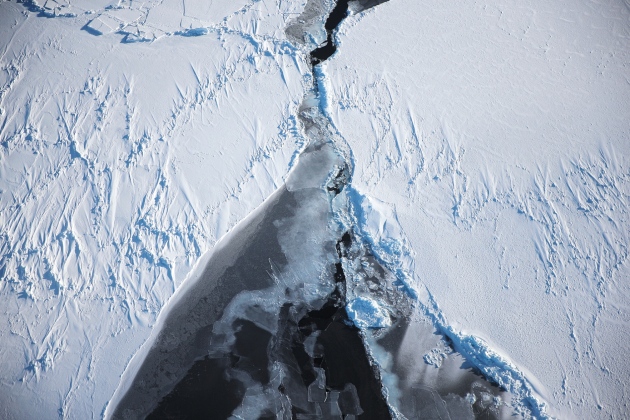 Sea ice off the coast of West Antarctica starts to melt, as seen from NASA's Operation IceBridge aircraft in October 2016.

It is therefore imperative that researchers understand the fate of Antarctic sea ice, especially in places where its area and thickness are changing, and why. This requires bringing together understandings of the drivers behind the movement of the ice (through drift and deformation) as well as those that control its growth and melt (thermodynamics). Such knowledge underpins climate models; these need to better represent the complex interactions between sea ice and the atmosphere, ocean and ice sheet. What’s required now is a focused and coordinated international effort across the scientific disciplines that observe and model global climate and the polar regions.

Satellites provide the best spatial information on sea ice around Antarctica. Regular observations reveal how ice cover varies over days, years and decades8. Weather, especially storms with high winds, has a daily influence, as well as a seasonal one. Longer-term changes are driven by larger patterns in the temperature and circulation of the atmosphere and oceans.

But near-continuous satellite observations only reach back about four decades. Longer records are essential to link sea-ice changes to trends in climate. Information from ships’ logbooks, coastal stations, whale-catch records, early satellite imagery and chemical analyses of ice cores hint that sea-ice coverage might have been up to 25% greater in the 1940s to 1960s6. 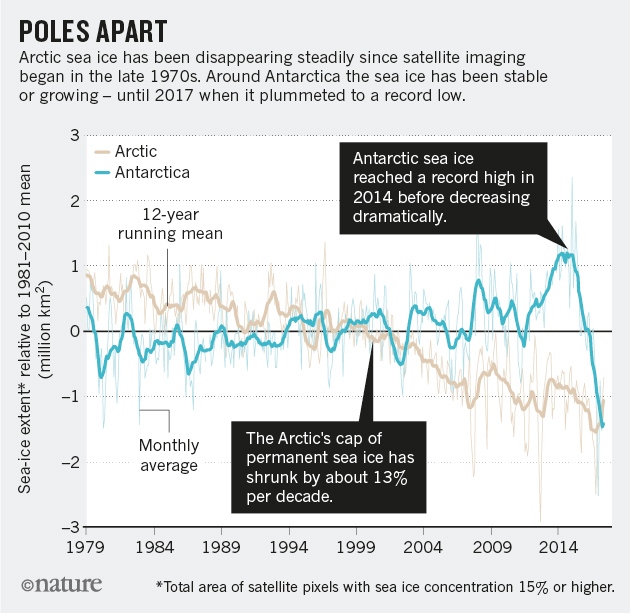 Collecting more ice cores and historical records, and synthesizing the information they contain, could reveal local trends. These would help to identify which climatic factors drive Antarctic sea-ice changes6. For instance, in 2017, the area most depleted of sea ice was south of the Eastern Pacific Ocean. This region has strong links to the climate of the tropics, including the El Niño–Southern Oscillation, suggesting that sea ice is sensitive to conditions far from the poles.

Another issue is how the balance between dynamics and thermodynamics drives the advance and retreat of ice. The thickness and volume of ice depend on many factors, including the flow of heat from the ocean to the atmosphere and to the ice. Sea ice influences the saltiness of the ocean. As the ocean freezes, salt enters the water; as the ice melts, fresh water returns to the sea. Such processes are difficult to measure precisely, having uncertainties to within 50–100% of the signal. And they are hard to model.

Satellite altimeters can measure the distance between the surfaces of the sea ice and ocean accurately, and this distance can be used to calculate the ice thickness. But it is hard to interpret these data without knowing how much snow is on the ice, its density and whether the snow’s weight pushes the ice surface below sea level (as is often the case). Calibrating and validating satellite data are crucial, as is developing algorithms to merge and analyse information from a variety of sources.

Ice, ocean and air must be sampled at appropriate intervals over a wide enough area to establish how they interact. Research ice-breaker cruises are essential for collecting in situ observations; one such was the US PIPERS (Polynyas, Ice Production and seasonal Evolution in the Ross Sea) campaign in 2017. But ships travel only along narrow routes and for a short time, typically 1–3 months.

Increasingly, autonomous instruments and vehicles — underwater, on-ice and airborne — are providing data throughout the year and from inaccessible or dangerous regions. These robotic systems are giving revolutionary new information and insights into the formation, evolution, thickness and melting of sea ice. Sensors mounted on marine mammals (such as elephant seals), or on floats and gliders, also beam back data on temperature, salinity and other physical and biogeochemical parameters. But to operate continuously, these instruments need to be robust enough to withstand the harsh Antarctic marine environment.

Current climate models struggle to simulate the seasonal and regional variability seen in Antarctic sea ice. Most models have biases, even in basic features such as the size and spatial patterns of the annual cycle of Antarctic sea-ice growth and retreat, or the amount of heat input to the ice from the ocean. The models fail to simulate even gross changes2, such as those driven by tropical influences on regional winds9. Because ice and climate are closely coupled, even small errors multiply quickly. 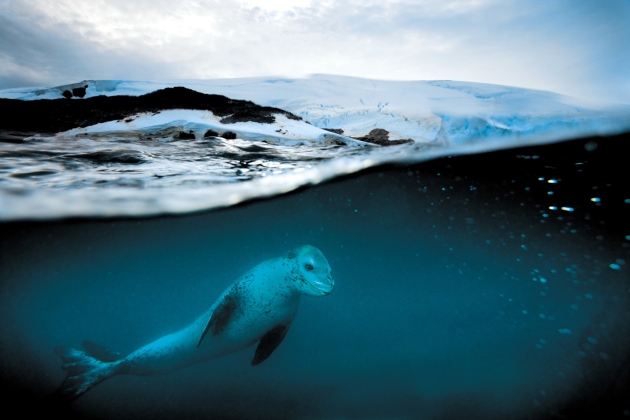 Leopard seals live, hunt and breed among the pack ice in Antarctic waters.

Features that need to be modelled more accurately include the belt of strong westerly winds that rings Antarctica, and the Amundsen Sea Low — a stormy area southwest of the Antarctic Peninsula. Models disagree, for example, on whether persistent westerly winds should increase or decrease sea-ice coverage around Antarctica. Simulations of clouds and precipitation are also inadequate. These cannot currently reproduce the correct amounts of snowfall or sea surface temperature of the Southern Ocean (the latter is widely overestimated by the models).

Climate models must also include the mixing of waters by surface winds and the impact of waves on the formation and break-up of sea ice. Precipitation and meltwater from ice sheets and icebergs influence the vertical structure of the ocean and how it holds heat, which also affects the growth and decay of sea ice. Researchers need to develop models of the atmosphere–ocean–sea-ice environment at high spatial resolution.

Explaining the recent variability in Antarctic sea ice, and improving projections of its future in a changing climate, requires projects that bridge many disciplines. For example, the research communities involved in ice-core analysis, historical data rescue and climate modelling need to collaborate to track sea-ice variability over timescales longer than the satellite record.

“Because ice and climate are closely coupled, even small errors multiply quickly.”

Some gaps in our knowledge can be filled through nationally funded research. More demanding cross-disciplinary work must be supported through international collaboration. Leading the way are organizations such as the Scientific Committee on Antarctic Research, the Scientific Committee on Oceanic Research, the World Climate Research Programme’s Climate and Cryosphere project and the Past Global Changes project. But essential work remains to be done, including: more detailed model comparisons and assessments; more research cruises; and the continuity and enhancement of satellite observing programmes relevant to sea ice. These organizations should partner with funding agencies to make that happen.

Better representations of the Southern Ocean and its sea ice must now be a priority for modelling centres, which have been focused on simulating the loss of Arctic sea ice. Such models will be crucial to the next assessment of the Intergovernmental Panel on Climate Change, which is due around 2020–21. A good example of the collaborative projects needed is the Great Antarctic Climate Hack (see go.nature.com/2ttpzcd). This brings together diverse communities with an interest in Antarctic climate to assess the performance of models.