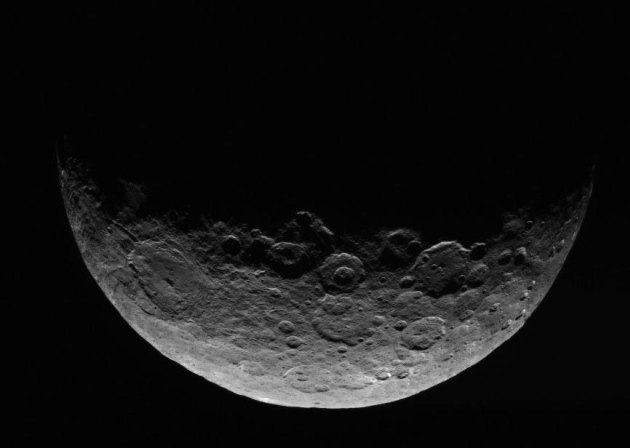 Ceres contains roughly one-third of the mass of the entire asteroid belt.

Asteroids might look dry and barren, but the Solar System’s biggest asteroid — Ceres — is chock full of water, NASA’s Dawn spacecraft has found.

“It’s just oozing,” says Thomas Prettyman, a nuclear engineer at the Planetary Science Institute in Tucson, Arizona. He led the team that built the neutron-counting instrument aboard Dawn, which reported its findings on 15 December in Science1.

Today, the water is either frozen as ice, filling pore spaces deep inside Ceres, or locked inside hydrated minerals at the surface. But billions of years ago, early in Ceres’s history, heat left over from the Solar System’s formation probably kept the asteroid warm inside. This allowed the water to churn and flow, helping to separate Ceres into layers of rock and ice.

“We know the water and the rock have separated and interacted over time,” said Carol Raymond, a planetary scientist at NASA's Jet Propulsion Laboratory in Pasadena, California, at a meeting of the American Geophysical Union in San Francisco on 15 December.

The discovery adds to a growing awareness of Ceres as an active, wet world that pushes the boundary of what it means to be a planet. Today it sports a 4-kilometre-high ice volcano and bright spots of salt mixed with ice and rock.

At 940 kilometres across, Ceres is so big that it contains roughly one-third of all the mass in the asteroid belt — and it is technically both an asteroid and a dwarf planet. Researchers knew that Ceres was rich in water on the basis of its estimated density, by studying light reflecting off the hydrated minerals on its surface and because they spotted water apparently steaming from it. But they did not know exactly how much water was there until Dawn showed up in March 2015.

The spacecraft studies chemical elements by counting the gamma-rays and neutrons reflecting off Ceres as cosmic rays bombard it. Prettyman’s team generated a map of the asteroid’s hydrogen, which appears in water ice and hydrated minerals.

Hydrogen levels were richest in the middle to high latitudes, with the greatest concentrations — up to 30% water — present at the north pole. Around the equator, frozen water has probably sublimated into space and dried out Ceres’s surface, Prettyman says. An astronaut there would have to dig down about 1 metre to find frozen water, whereas at the north pole, a visitor “would just swipe and find the ice table”, he says.

Ceres’s dampness stands in stark contrast to Vesta, a much drier asteroid visited by Dawn in 2011–12. On average, Ceres is more than 100 times richer in hydrogen than Vesta, Prettyman says.

A second paper, appearing on 15 December in Nature Astronomy, shows where other frozen water might lie2. A team led by Thomas Platz of the Max Planck Institute for Solar System Research in Göttingen, Germany, studied 634 craters on Ceres that are always in the dark. Ten of those have bright areas on the crater floor, and spectral studies of one of them found that it consisted of water ice.

Similarly to the Moon and Mercury, the airless Ceres apparently manages to trap frozen water in dark areas on its surface, the team says.