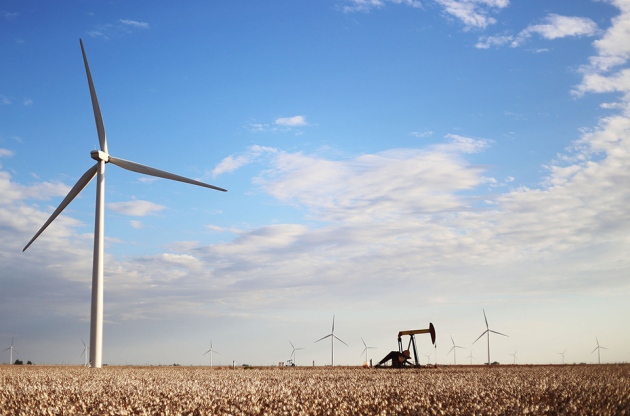 Wind energy is on the up in the United States.

Renewable-energy capacity in the United States has more than tripled since 2008, according to a report published this month on US sustainable energy by the Business Council for Sustainable Energy (BCSE), an industry group.

Energy capacity from sustainable energy sources such as wind, solar, biomass and geothermal reached a record 141 gigawatts (GW) in the country at the end of 2016 (see 'Sunny outlook'). Hydropower, the most prevalent renewable in the United States, added another 103 GW, which has remained roughly stable over the past decade.

New wind and solar capacity account for the bulk of the increase. The combined capacity for these two energy sources has increased almost fivefold since 2008, from 26 to 123 GW. Wind accounted for 83 GW.

But US wind capacity still lags way behind that of the European Union and China, which both had more than 140 GW installed by 2015. 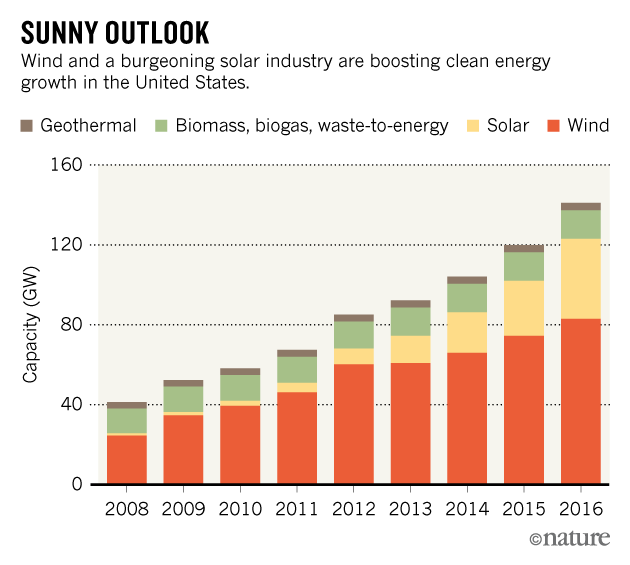 The increasing use of solar photovoltaics and cells drove most of the growth in US low-carbon energy in recent years — the result of favourable tax policies and sharply falling installation costs, according to the BCSE analysis, which was conducted by Bloomberg New Energy Finance. In terms of growth in the solar photovoltaics sector, the United States is surpassed only by China and Japan.

“The energy market is shifting, and it’s shifting quickly,” says Lisa Jacobson, president of the BCSE, based in Washington DC. But local, state and federal governments all have a part to play if the United States is going to increase the pace of clean-energy deployment in the coming decades, Jacobson says. “We still need policy leadership.”

Renewable energy, including hydropower, met 15% of US electricity demand last year, up from just 8% a decade ago. By comparison, renewables fulfilled 24% of global demand. Over the same period, the share of energy from coal fell from almost 50% to 30% in the United States.

And thanks to the increasing decarbonization of the power sector and improved energy efficiency generally, US greenhouse-gas emissions plunged to a 25-year low in 2016.