Sketch the structure of an organic molecule on a napkin and it may not be apparent that there are millions of possible ways that it could assemble as a 3D crystal. Now, a collaboration of dozens of chemists and computer programmers has successfully predicted the crystal structure of five, complex, ‘drug-like’ organic molecules — using nothing but a 2D map showing which atoms connect to which.

The achievement, announced on 27 October at a workshop in Cambridge, UK, paves the way for software that would cut the cost of the design and manufacture of drugs and other chemical products, as well as further our understanding of fundamental chemistry.

A molecule’s crystal structure determines its properties (see ‘Crystal challenge’). In 1998, the US pharmaceutical firm Abbott Laboratories learned this the hard way when it had to pull production of the capsule form of the HIV treatment ritonavir because the drug had started switching to an unexpected structure during manufacture. The crystal structure that a molecule adopts is generally the one with the lowest energy, but predicting what this is for any particular molecule is “fiendishly difficult”, says Colin Groom, executive director of the Cambridge Crystallographic Data Centre (CCDC). 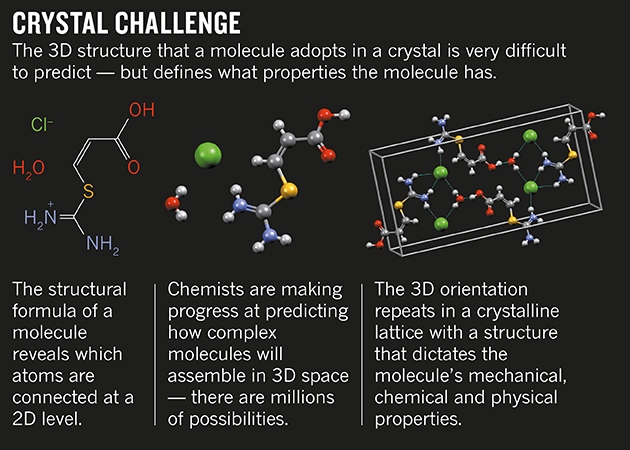 Even when chemists know which atoms are connected to which, the atoms can still be in different orientations because the bonds that connect them can bend and rotate in myriad ways. There are also multiple options for how molecules can pack together. “It is like looking for a needle in an unimaginably big haystack,” says Anthony Reilly, a structural chemist at the CCDC.

Since 1999, the CCDC has organized six challenges known as the Blind Test of Organic Crystal Structure Prediction Methods. Rather than a contest, organizers see the challenge as a large collaborative attempt to compare the strengths of the latest techniques. “The groups participating represent pretty much the entire crystal-structure prediction community, and the methods used are the very best developed,” says Groom.

The challenge typically takes place over a year, and sets two major problems. First, teams must come up with a list of all possible arrangements in which the molecules could form a crystal. Some teams do a rough calculation of the energy of each to whittle down the list, burning up hundreds of thousands of hours of computing time; others start with pure guesses and iteratively ‘breed’ the most stable to derive possible candidates more quickly. In the second stage, teams take the shortlists — sometimes assembled by a different group — and do more-precise calculations of the energy of each, producing a ranking of the candidates.

The latest challenge, which included a record 25 teams — ten more than the previous contest in 2010 — brought a “massive improvement”, says Groom. The molecules selected were “nasty, real-life systems” of the size and complexity to be interesting to drug companies. Previous challenges had included molecules that were flexible or made from multiple parts. This year’s challenge combined such features in the same molecules and for one target, asked participants to predict not just one stable structure, but all its many stable forms, known as polymorphs.

The teams rose to the challenge: at the Cambridge workshop, the CCDC announced that each of the five targets, and their polymorphs, appeared in at least one of the shortlists produced by the various methods. A paper with the full results will be published in a special issue of Acta Crystallographica Section B.

Moreover, one team, led by Marcus Neumann at the German company Avant-garde Materials Simulation in Freiburg, included the correct solution in each of its shortlists. Had the team combined its efforts with those of a group — led by theoretical chemist Alexandre Tkatchenko at the Fritz Haber Institute in Berlin — that got a perfect score in the ranking phase, the two would together have achieved a perfect score for both rounds and across all targets. Such a result has never occurred in the history of the contest. “With what you have seen from me, and what you have seen from Tkatchenko,” says Neumann, “it is fair to claim that to a large extent, this blind test has shown that the problem of organic crystal structure prediction has been solved.”

“We have finally kicked the user out of the equation.”

More so than in previous blind tests, teams including both Neumann’s and Tkatchenko’s took into account how quantum mechanical interactions would contribute to the energy of structures. In particular, Tkatchenko used a method published just last year that encompassed these interactions over longer ranges than has been done previously. And Neumann says that his program was unique because it made every decision by itself; most others required human decisions once the computer had returned its calculations. “We have finally kicked the user out of the equation,” Neumann says.

And some are frustrated that Neumann has refused to release his computer code: “The day I have a pension plan, I will talk about this freely,” he told the workshop. That will make it hard for others to build on his team’s breakthrough. “We don’t really have a sense of how it works,” says challenge participant Claire Adjiman, a chemical engineer at Imperial College London. “But I understand why he doesn’t tell us more.”

Tkatchenko and Neumann now plan to work together. “My own interest is to understand polymorphism and be able to offer tools to people,” says Tkatchenko. “His interest is more commercial, but I’m sure we can find the middle ground.”

Both Price and Neumann, meanwhile, are already working with industry on how to use their prediction calculations in drug development.