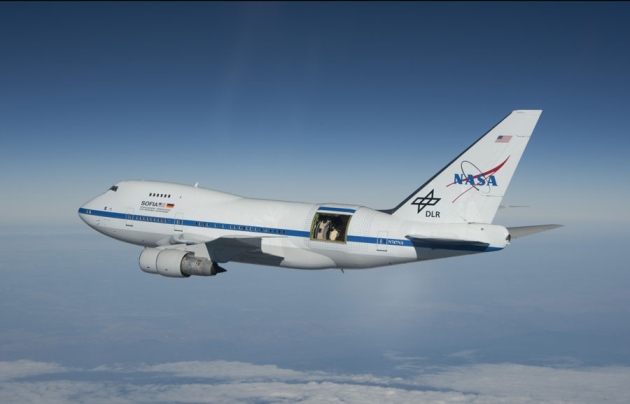 The Stratospheric Observatory for Infrared Astronomy carries a 2.5-metre telescope to viewing hotspots.

Last October, Diane Wooden was chasing a comet — from the back of a jumbo jet. The aeroplane, known as the Stratospheric Observatory for Infrared Astronomy (SOFIA), is a Boeing 747 modified to hold a 2.5-metre telescope and fly to altitudes of up to 13.7 kilometres, where it escapes most of the atmospheric water vapour that obscures infrared light in the night sky. Wooden, an astrophysicist at the NASA Ames Research Center in Moffett Field, California, was on board in the hope of capturing images of warm dust spewing off Comet ISON (see Nature 506, 281–283; 2014). But soon after she pointed the telescope at the comet, a circuit-breaker failed. It could not be replaced until the plane landed. Instead of nearly an hour observing the comet, Wooden got just a few minutes.

Wooden is still happy with the data she got: the only direct measurement of heat coming off ISON’s larger dust grains. But the glitch was typical of those that have plagued the complex flying observatory, a joint project that has so far cost about US$1.25 billion for NASA and the DLR, Germany’s aerospace centre.

After years of delays and cost overruns, and many flight hours lost to technical and other issues, SOFIA scientists say that they are finally on the verge of putting their predicaments in the past. On 21 February, a fourth telescope instrument was fully implemented, a long-awaited milestone that means SOFIA has reached full operational capability. “We’re entering a different phase now, where our real focus will be on operations and observing and gathering science,” says Erick Young, the science mission operations director for SOFIA at Ames. “We’ll hit our stride.”

Yet just as momentum starts to build, SOFIA will be grounded for a 5.5-month maintenance check mandated by the US government. That will limit the upcoming observing cycle to 222 hours, or fewer than 32 nights (see ‘Up in the air’), and leave astronomers trying to grab what flight hours they can, when they can. SOFIA will not reach its goal of 960 research hours in a calendar year until 2016. “Things are moving in the right direction, but there is a ways to go,” says Paul Goldsmith, an astronomer at the Jet Propulsion Laboratory in Pasadena, California.

Up in the air

*Planned hours are for general investigator observations. Additional science can be done with time given to instrument teams.
**Ratio of time requested in applications to available telescope time.

SOFIA was conceived in the early 1990s as a replacement for NASA’s Kuiper Airborne Observatory, a smaller telescope-on-a-plane that had been in use since 1975. The goal was to fly SOFIA from dusk until dawn several times a week so that astronomers could observe planets, stars and galaxies at the infrared wavelengths that are impossible to detect from the ground.

That goal is still far off. SOFIA saw its first light in 2010 (see Nature 466, 428–431; 2010) and began limited science runs in 2011. Since then, mission scientists have been following a drawn-out schedule for ramping-up research while bringing the major instruments into use. “It was a strategy to get the most science out,” says Paul Hertz, head of NASA’s astrophysics division in Washington DC.

SOFIA has found itself scooped by the European Space Agency’s Herschel space telescope, an infrared instrument launched in 2009. SOFIA was meant to be a pathfinder for Herschel, but instead has been left to chase interesting targets identified by the space telescope, which ceased operations last year.

SOFIA is also spending much less time doing science than project managers would like: in 2013, it logged just 175 of 240 scheduled research hours. The biggest culprit was the two-week US government shutdown in October, triggered when legislators could not reach agreement on a budget bill. Nine SOFIA flights were lost to the shutdown, including planned observations of a bright exploding star in the constellation Delphinus. “We lost the nova!” says Robert Gehrz, an astronomer at the University of Minnesota in Minneapolis and chair of the SOFIA users advisory group.

Technical troubles were also to blame. One instrument sprang a helium leak. Another experienced problems with its power supply and the fasteners used to attach it in the tele­scope cavity. Some images are still less than ideal because the telescope shakes during flight. But dealing with instrument issues is part of the normal teething process of bringing a complex observatory online, says Dan Lester, an astronomer at the University of Texas at Austin.

“Our real focus will be on operations and observing and gathering science.”

Keeping a modified jumbo jet flying night after night carries other challenges. Late last year, for example, a damaged turbine blade meant that an entire engine had to be replaced. The cost of employing pilots, technicians and mechanics adds up. The mission’s $78-million annual operation budget is the second most expensive in NASA’s astrophysics division, after the $93 million needed to keep the Hubble Space Telescope going.

For all its troubles, SOFIA has still racked up some scientific achievements, including the best measurements yet of an occultation, in which Pluto passed in front of a distant star and revealed its thin atmosphere. Because SOFIA can fly to locations up to 10 hours away from its home base in Palmdale, California, it can travel to many of the geographical spots where occultations and other such rare astronomical events are visible. Hans Zinnecker, SOFIA’s deputy director for science mission operations, says that research flights are getting more regular. He points to a string of nine flights over the course of three weeks from New Zealand, where SOFIA was deployed to study southern-sky targets such as the Magellanic Clouds. “That was a smashing success,” says Zinnecker. “It surprised even ourselves.”

Lester, who served on a 2013 NASA oversight panel for the mission, feels much more positive about it than he did a few years ago. “In many respects, SOFIA has turned the corner,” he says. “The problems that we’re having today are problems that we won’t have tomorrow.”