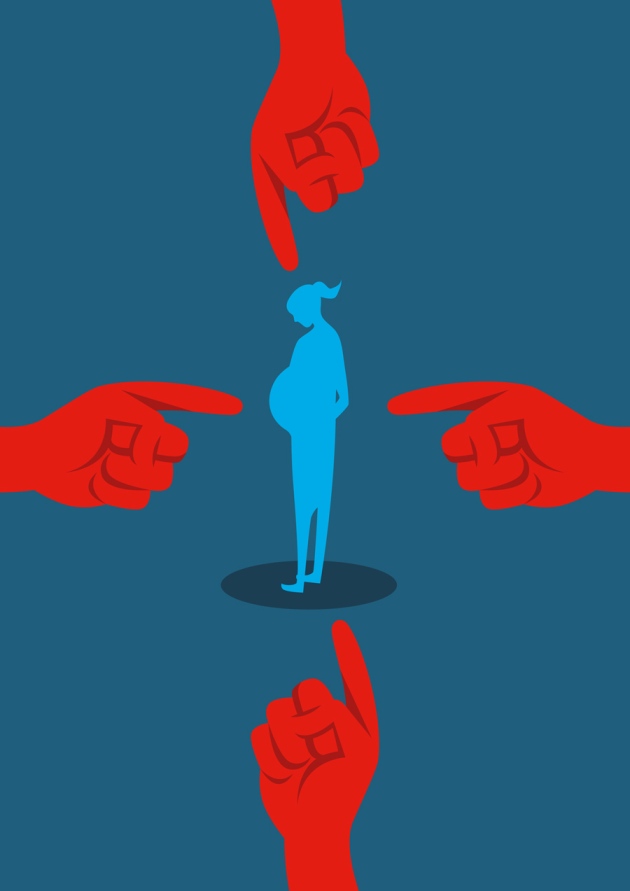 From folk medicine to popular culture, there is an abiding fascination with how the experiences of pregnant women imprint on their descendants. The latest wave in this discussion flows from studies of epigenetics — analyses of heritable changes to DNA that affect gene activity but not nucleotide sequence. Such DNA modification has been implicated in a child's future risk of obesity, diseases such as diabetes, and poor response to stress.

Headlines in the press reveal how these findings are often simplified to focus on the maternal impact: 'Mother's diet during pregnancy alters baby's DNA' (BBC), 'Grandma's Experiences Leave a Mark on Your Genes' (Discover), and 'Pregnant 9/11 survivors transmitted trauma to their children' (The Guardian). Factors such as the paternal contribution, family life and social environment receive less attention.

Questions about the long shadow of the uterine environment are part of a burgeoning field known as developmental origins of health and disease (DOHaD)1. For example, one study revealed2 that 45% of children born to women with type 2 diabetes develop diabetes by their mid-twenties, compared with 9% of children whose mothers developed diabetes after pregnancy.

DOHaD would ideally guide policies that support parents and children, but exaggerations and over-simplifications are making scapegoats of mothers, and could even increase surveillance and regulation of pregnant women. As academics working in DOHaD and cultural studies of science, we are concerned. We urge researchers, press officers and journalists to consider the ramifications of irresponsible discussion.

There is a long history of society blaming mothers for the ill health of their children. Preliminary evidence of fetal harm has led to regulatory over-reach. First recognized in the 1970s, fetal alcohol syndrome (FAS) is a collection of physical and mental problems in children of women who drink heavily during pregnancy. In 1981, the US Surgeon General advised that no level of alcohol consumption was safe for pregnant women. Drinking during pregnancy was stigmatized and even criminalized. Bars and restaurants were required to display warnings that drinking causes birth defects. Many moderate drinkers stopped consuming alcohol during pregnancy, but rates of FAS did not fall3.

Although those who drink heavily during pregnancy can endanger their children, the risks of moderate drinking were overstated by policy-makers — a point recently reaffirmed by the Danish National Birth Cohort study, which did not find adverse effects in children whose mothers drank moderately during pregnancy4. Nonetheless, warnings about alcohol during pregnancy made in inappropriate contexts still cause pregnant women to suffer social condemnation and to agonize over an occasional sip.

In the 1980s and 1990s, surging use of crack cocaine (a smokable form of the drug) in the United States led to media hysteria around 'crack babies' — those who had been exposed to cocaine in the womb. Pregnant women who took drugs lost social benefits, had their children taken away and were even sent to prison. More than 400 pregnant women, mostly African American, have been prosecuted for endangering their fetuses in this way. Exposed infants were stigmatized as a biologically doomed underclass. Today, fetal exposure to crack or cocaine is considered no more harmful than exposure to tobacco or alcohol5, but criminal prosecution of pregnant women who take such drugs continues.

“We urge scientists, educators and reporters to anticipate how this work is likely to be interpreted in popular discussions.”

Previous generations found other ways to blame women. As late as the 1970s, 'refrigerator mothers' (a disparaging term for a parent lacking emotional warmth) were faulted for their children's autism. Until the nineteenth century, medical texts attributed birth deformities, mental defects and criminal tendencies to the mother's diet and nerves, and to the company she kept during pregnancy.

Although it does not yet go to the same extremes, public reaction to DOHaD research today resembles that of the past in disturbing ways. A mother's individual influence over a vulnerable fetus is emphasized; the role of societal factors is not. And studies now extend beyond substance use, to include all aspects of daily life.

A 2013 story on the health-information website WebMD demonstrates the sort of responsible reporting that we would like to see more of (see go.nature.com/p2krhs). The story reported findings of a four-fold increased risk of bipolar disorder in adult offspring if a mother had influenza during pregnancy6, but it emphasized that the overall risk observed was small and that bipolar disorder is treatable. It stated that the study considered only one of many possible risk factors and did not establish cause and effect. Furthermore, the headline did not lead with the scary number.

Much less context was given in coverage of a 2012 paper7 showing that second-generation offspring of rats eating a high-fat diet during pregnancy had an 80% chance of cancer, compared with 50% of control rats. 'Why you should worry about grandma's eating habits', read one headline. “Think twice about that bag of potato chips because you are eating for more than two,” warned another story. These articles did not state that the rats were bred for high cancer rates. Nor did they include inconsistent results: third-generation offspring of female rats on high-fat diets actually had lower incidences of tumours than their control peers.

Inadequately supported and poorly contextualized statements are also found in well-intentioned educational materials. The website beginbeforebirth.org, put together by researchers at Imperial College London, advocates ways to “support and look after pregnant women”. A video on the website portrays a 19-year-old released from prison after a stint for looting (see go.nature.com/wynfzw). “Perhaps his problems stretch right back to the womb,” the narrator says. “Could better care of pregnant women be a new way of preventing crime?” At best, such suggestions overstate conclusions of current research.

Beyond the maternal imprint

Today, an increasing segment of DOHaD research recognizes that fathers and grandparents also affect descendants' health. Studies suggest that diet and stress modify sperm epigenetically and increase an offspring's risk of heart disease, autism and schizophrenia. In humans, the influence of fathers over mothers' psychological and physical state is increasingly recognized. So are effects of racial discrimination, lack of access to nutritious foods and exposure to toxic chemicals in the environment.

Viewed from this broader perspective, DOHaD provides a rationale for policies to improve the quality of life for women and men. It must not be used to lecture individual women, as in a 2014 news report from the US media organization National Public Radio on an epigenetics study in mice: “Pregnancy should be a time to double-down on healthful eating if you want to avoid setting up your unborn child for a lifetime of wrestling with obesity.” How are women who lack time or access to healthy foods to act on such advice?

We urge scientists, educators and reporters to anticipate how DOHaD work is likely to be interpreted in popular discussions. Although no one denies that healthy behaviour is important during pregnancy, all those involved should be at pains to explain that findings are too preliminary to provide recommendations for daily living.

Caveats span four areas. First, avoid extrapolating from animal studies to humans without qualification. The short lifespans and large litter sizes favoured for lab studies often make animal models poor proxies for human reproduction. Second, emphasize the role of both paternal and maternal effects. This can counterbalance the tendency to pin poor outcomes on maternal behaviour. Third, convey complexity. Intrauterine exposures can raise or lower disease risk, but so too can a plethora of other intertwined genetic, lifestyle, socio-economic and environmental factors that are poorly understood. Fourth, recognize the role of society. Many of the intrauterine stressors that DOHaD identifies as having adverse intergenerational effects correlate with social gradients of class, race and gender. This points to the need for societal changes rather than individual solutions.

Although remembering past excesses of 'mother-blame' might dampen excitement about epigenetic research in DOHaD, it will help the field to improve health without constraining women's freedom.