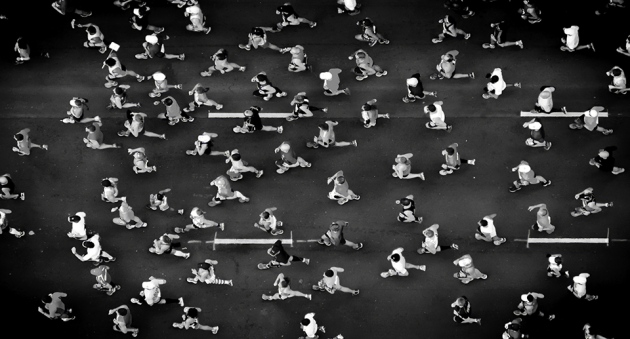 Running is contagious, according to apps that track exercise progress.

In his 1959 short story The Loneliness of the Long Distance Runner, the writer Alan Sillitoe used solitary exercise as both a metaphor for life’s journey and a literary device to explore the thoughts and feelings of his young and troubled protagonist. “The long-distance run of an early morning makes me think that every run like this is a life — a little life, I know — but a life as full of misery and happiness and things happening as you can ever get really around yourself,” he wrote. And the isolation was a necessary part of the experience. “You should think about nobody and go your own way.”

Nearly 60 years later, loneliness is out of fashion. The social network of wearable technology and data sharing now includes millions of people who use digital apps to measure, record and compare how often they run, how far and how fast. Competitive fitness is no longer a phrase used and understood only by evolutionary biologists. And if going your own way has become more difficult in this new runners’ world, to think about nobody else is a rare thing indeed.

Scientists this week show that such exchange of information between runners has a real and measurable impact. People run more when their friends do. And when they see their friends run faster and further, they push themselves to do so too.

In the study, published in Nature Communications, researchers from the MIT Sloan School of Management in Cambridge, Massachusetts, describe how they recorded the daily exercise patterns, geographical locations, and social-network ties of more than 1 million people, who between them ran more than 350 million kilometres over 5 years (S. Aral and C. Nicolaides Nature Commun. 8, 14753; 2017).

Exercise, the results showed, is socially contagious. And the contagion breaks down along distinct lines. Whereas men are affected by the running patterns of both their male and female friends, women are influenced only by their female friends. And despite the aspirational spirit of sports-company adverts and marketing, and of elite athletes and champions, most runners in this study were motivated by a less noble ambition: to keep ahead of those behind them. This is a live debate in exercise psychology: whether upward comparisons to better-performing rivals urge us to improve, or whether downward comparisons compel us to work to protect our superiority over those lagging behind.

The study offers some of the first hard evidence that health-related habits can spread — and so perhaps could be deliberately seeded and encouraged — by social influence and peer pressure. Previous research has sought such a contagious effect in factors such as obesity and smoking, but the results have been inconclusive.

The new study is a further example of the power of social data collected and made available routinely on a very large scale. Runners cannot lie about their times and distances as they might be tempted to do in self-reported surveys. (Although the competitive nature of running does drive some to cheat and ride a bike.)

Sillitoe’s lonely narrator liked to claim that running offered freedom. “I’ve got thoughts and secrets and bloody life inside me that he doesn’t know is there, and he’ll never know what’s there.” Perhaps not yet — but science is getting there fast.