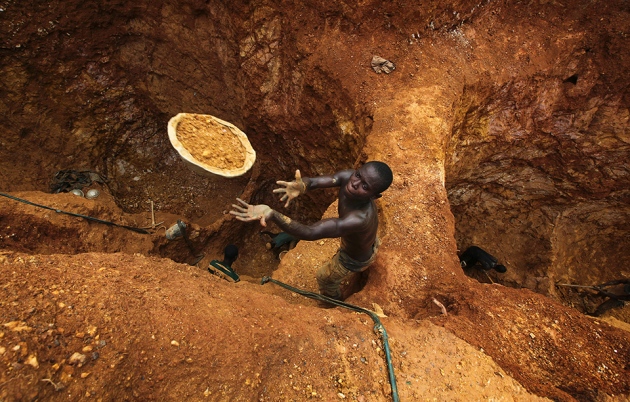 Higher temperatures have been correlated with reduced economic productivity in poorer countries.

Putting a price on the damage caused by the release of a tonne of climate-warming carbon dioxide into the atmosphere is an enormously complex exercise. Yet it’s far from a purely academic issue: in the United States, for example, proposed government regulations must be considered in terms of how their effects on climate change will exact costs on the health and well-being of people living far into the future. Economists call this the social cost of carbon, and many fear that prevailing rates — the central estimate used by the US government is US$40 per tonne — are much too low.

That fear is driven in part by research showing that global warming might have economic effects beyond well-characterized ones such as the erosion of agricultural productivity and damage to infrastructure from rising seas. Hot weather could subtly harm economic growth by affecting people much as it does plants: as temperatures rise above some optimum point, productivity could decline.

The relationship between temperature and the human capability to produce goods and services is one of many potential topics of discussion at a 13 November meeting of a panel charged with reviewing the social cost of carbon by the US National Academies of Science, Engineering and Medicine. The panel is drafting a preliminary report looking at whether the US government’s figure should be adjusted to account for the science in the Intergovernmental Panel on Climate Change’s latest assessment, completed in 2014. In practical terms, the central issue is how a handful of computer models that calculate the social cost of carbon differ, and whether they capture all of the potential damage that global warming could produce.

Without action to diminish global warming, average global incomes would be 23% less in 2100 than they would be in a stable climate, according to research published on 21 October in Nature1. The effects would be most pronounced in warmer, developing countries, with some of the poorest in danger of being worse off at the end of the century than they are today.

“With global impacts this big, the social cost of carbon has to be way higher” than current estimates, says lead author Marshall Burke, an economist at Stanford University in California.

It is not entirely clear why temperature would influence economic growth rates, but Burke cites research suggesting that heat affects human cognition and reduces labour productivity outdoors2. He says that even short-term economic losses due to higher temperatures could reduce investments that are necessary to maintain economic growth.

“We can’t just assume that people are not sensitive to temperature,” he says.

One of the first major studies to document the effects of temperature on economic growth was led by Melissa Dell, an economist at Harvard University in Cambridge, Massachusetts. Published in 20123, it looked at several decades of economic and weather data in 125 countries, and found that a 1 °C increase in average annual temperature reduces economic growth by 1.4 percentage points in poor countries; it found no discernible impact in richer ones. The study identified short-term effects on agriculture, industrial activity and political stability.

Frances Moore, an environmental economist at the University of California, Berkeley, and co-author Delavane Diaz, now at the Electric Power Research Institute based in Palo Alto, California, plugged the growth rates calculated by Dell and her colleagues into an “integrated assessment model” that simulates both global warming and economic activity. They found4 that considering temperature effects boosted the present-day social cost of carbon to $220 per tonne.

“If you allow temperature to affect growth rates, then that has a permanent effect on the economy,” Moore says. “Those damages just accumulate over time.”

It remains unclear how that might play out over decades. The studies look at year-to-year fluctuations, but if average temperatures rise steadily over 50 years, some experts argue that people may be able to adapt to the new regime.

For some, the very idea that temperatures can exert such a powerful effect on the economy smacks of centuries-old theories about ‘climate determinism’ that were once deployed to explain why northern countries had generally developed faster than those in the tropics.

“That’s long been debunked, but it has snuck back into the discussion,” says Robert Mendelsohn, an economist at Yale University in New Haven, Connecticut. He calls the data on temperatures and economic productivity “very suspicious” and says that most research shows that economic sectors outside of agriculture are not all that sensitive to climate.

Chris Hope, a policy modeller at the University of Cambridge, UK, who developed one of the three models used by the US government to estimate the social cost of carbon, says that calculations are riddled with uncertainties related to both climate impacts and economic growth. He wants to see whether the studies stand the test of time before making any adjustments.

“These are very interesting bits of research, but they need to be evaluated properly,” he says. “And then we’ll see.”