Albert Einstein is considered to be one of the most intelligent people that ever lived, so researchers are naturally curious about what made his brain tick.

Photographs taken shortly after his death, but never before analysed in detail, have now revealed that Einstein’s brain had several unusual features, providing tantalizing clues about the neural basis of his extraordinary mental abilities1.

While doing Einstein's autopsy, the pathologist Thomas Harvey removed the physicist's brain and preserved it in formalin. He then took dozens of black and white photographs of it before it was cut up into 240 blocks. He then took tissue samples from each block, mounted them onto microscope slides and distributed the slides to some of the world’s best neuropathologists.

The autopsy revealed that Einstein’s brain was smaller than average and subsequent analyses showed all the changes that normally occur with ageing. Nothing more was analysed, however. Harvey stored the brain fragments in a formalin-filled jar in a cider box kept under a beer cooler in his office. Decades later, several researchers asked Harvey for some samples, and noticed some unusual features when analysing them.

A study done in 1985 showed that two parts of his brain contained an unusually large number of non-neuronal cells called glia for every neuron2. And one published more than a decade later showed that the parietal lobe lacks a furrow and a structure called the operculum3. The missing furrow may have enhanced the connections in this region, which is thought to be involved in visuo-spatial functions and mathematical skills such as arithmetic.

Now, anthropologist Dean Falk of Florida State University in Tallahassee and her colleagues have obtained 12 of Harvey’s original photographs from the National Museum of Health and Medicine in Silver Spring, Maryland, analysed them and compared the patterns of convoluted ridges and furrows with those of 85 brains described in other studies.

Many of the photographs were taken from unusual angles, and show structures that were not visible in photographs that have been analysed previously. The analysis is published today in the journal Brain1. 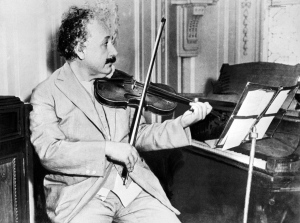 Einstein was a keen violinist, which may account for an overdeveloped section of his brain that deals with the left hand.

The most striking observation, says Falk, was “the complexity and pattern of convolutions on certain parts of Einstein's cerebral cortex”, especially in the prefrontal cortex, and also parietal lobes and visual cortex.

The prefrontal cortex is important for the kind of abstract thinking that Einstein would have needed for his famous thought experiments on the nature of space and time, such as imagining riding alongside a beam of light. The unusually complex pattern of convolutions there probably gave the region and unusually large surface area, which may have contributed to his remarkable abilities.

Falk and her colleagues also noticed an unusual feature in the right somatosensory cortex, which receives sensory information from the body. In this part of Einstein’s brain, the region corresponding to the left hand is expanded, and the researchers suggest that this may have contributed to his accomplished violin playing.

According to Sandra Witelson, a behavioural neuroscientist at McMaster University in Hamilton, Canada, who discovered that the parietal operculum is missing from Einstein’s brain, the study’s biggest contribution may be in encouraging further studies. “It makes clear the location and accessibility of photographs and slides of Einstein's brain,” she says. “This may serve as an incentive for other investigations of Einstein's brain, and ultimately of any consequences of its anatomical variations.”