“What is that?” planetary scientist Barbara Cohen gasped, marvelling at the latest images of Pluto released on 24 September.

Cohen, of NASA's Marshall Space Flight Center in Huntsville, Alabama, is not alone. It is a question nearly every planetary specialist is asking with each release of pictures from NASA's New Horizons spacecraft, which flew past Pluto and its moons in July. The latest images — the most-detailed colour shots yet downlinked to Earth — show a bizarre 'snakeskin' terrain, wrinkled with ridges and smudged with rust-coloured material. 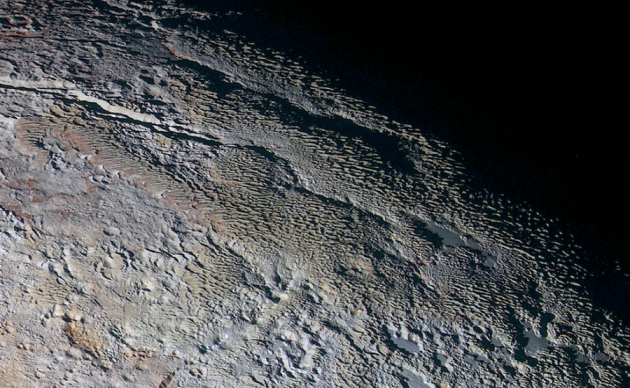 Many of the ridges run in parallel directions, suggesting that they were formed by some sort of overarching geological influence — perhaps wind. The corrugated ridges seem to be tens of kilometres long. “These aren't little ripples — these are giant features,” says Alex Parker, a member of the New Horizons science team at the Southwest Research Institute in Boulder, Colorado.

The photos come from the colour camera aboard New Horizons's Ralph instrument, and are enhanced to bring out compositional differences between materials on the dwarf planet's surface.

So far, Pluto has turned out to be strikingly active for an icy world 5 billion kilometres from the Sun. Nitrogen glaciers swirl around the base of towering mountains, which are held up by the sheer rigidity of ice frozen at about −235 °C, 38 degrees above absolute zero.

Another image reveals Pluto's surface in the greatest detail yet, with resolutions down to 250 metres. Chunks of mountain blocks, coated with what are probably dark-red hydrocarbon molecules, are surrounded by ice that flows through a basin known as Sputnik Planum.

Blocky structures seen here may be mountains — or icebergs.

Seen from above, the ice seems to close in around the jagged mountains, resembling the embayments in the sea ice that surrounds Antarctica. But some of these 'mountains' might in fact be icebergs decoupled from the bedrock beneath.

And viewed at close range, even the smoothest ice surfaces turn out to be remarkably complex, with a pitted or dimpled texture that could reflect ices subliming away into the atmosphere. These vast plains might represent the tops of thick layers of ice that flow and churn from within, tracing polygonal structures on the surface. 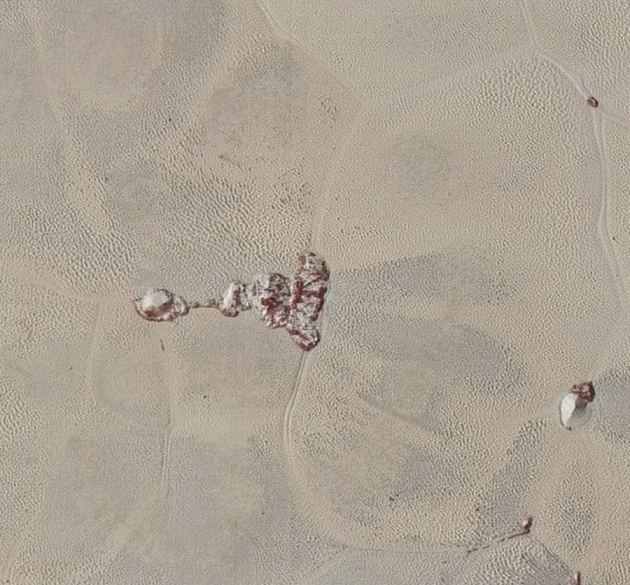 Some of the mountain ranges seem to show darker layers of material in the sides of steep cliffs. Elsewhere, material piles up between the peaks, including a spot that looks like an icy pond.

Next month, New Horizons will burn its engines in a series of manoeuvres to set it on course to fly past a second, even more distant world in 2019.