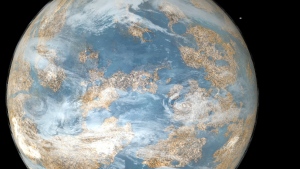 Another planet with liquid water may lie within light years of the Solar System.

Some of the stars nearest to the Solar System are likely to host planets just like home — roughly the size of Earth and capable of bearing liquid water — according to a new statistical study using data from NASA’s Kepler telescope.

Courtney Dressing, an astronomer at Harvard University in Cambridge, Massachusetts, announced the results on 8 January at a meeting of the American Astronomical Society in Long Beach, California1.

“This is terrific,” says Natalie Batalha, an astronomer at San José State University in California and deputy leader of the Kepler science team. Batalha chaired the meeting session at which Dressing presented the findings; at the end of the talk, Batalha was so stunned that she momentarily forgot to ask the audience for questions.

Dressing’s study, done in collaboration with Harvard colleague David Charbonneau, focuses on the occurrence of planets that are Earth-sized — which they define as having a radius between half and twice that of Earth — and orbit so-called M dwarfs. These are cool, low-mass stars that account for about 75% of the stars in our Galaxy. In particular, the team looked for planets within the habitable zone, that is, whose orbits put them at the right distance from the star for water to exist in liquid state on their surfaces.

Kepler’s main mission is to find the telltale dimming of larger, Sun-like stars caused when an orbiting planet crosses in front of — or transits — its star. However, the telescope also monitors stars of other types in its field of view. M dwarfs are relatively faint, so they are visible less often than other stars, despite their abundance. Among the roughly 150,000 stars that Kepler can observe and track, only 5,000 or so are M dwarfs.

Kepler does not yet have enough data to estimate the occurrence of Earth-sized planets in the habitable zones of bright Sun-like stars. But Dressing realized that she could make such a calculation for M dwarfs, based on two facts.

First, M dwarfs are relatively cool, so their habitable zones lie close to the star — just less than Mercury’s distance from the Sun. Planets with such narrow orbits make between five and seven transits each Earth year rather than the one of a planet in the habitable zone of a Sun-like star. The more-frequent transits provide more data for researchers.

Second, because M dwarfs are relatively small, each transit blocks a greater proportion of their light, making the dimmings easier to detect.

But before Dressing could perform her statistical analysis, she had to painstakingly review the radius and temperature of each M dwarf in the Kepler field of view. Previous, less accurate, estimates had been based on extrapolations from the study of Sun-like stars.

Dressing and Charbonneau studied 3,609 M dwarfs out of the 5,000 in Kepler’s field of view and calculated that each of those has an 87% chance of harbouring an Earth-sized planet in an orbit of 50 days or less. That range includes planets in the habitable zone but also those that are closer to their star and therefore too hot. Their estimate is consistent with an independent calculation by John Johnson, an astronomer at the California Institute of Technology in Pasadena, and his colleagues, who also concluded that the Milky Way may contain as many as 100 billion planets in total. Johnson reported that result at the meeting on 7 January2.

The Harvard astronomers estimate that 6% of the M dwarfs in Kepler’s field of view harbour Earth-sized planets in the habitable zone. That may not sound like much, notes Dressing, but given the preponderance of M dwarfs in the Galaxy, there should be at least one potentially habitable Earth-sized planet around an M dwarf within 20 light years of the Solar System.

“I hope that [Dressing’s] results garner a lot of attention at this meeting, because they are very profound and exciting,” says Johnson.

A different statistical analysis of Kepler data, reported on 7 January at the meeting3, considered the abundance of Earth-sized planets orbiting all stars — not just M dwarfs — with periods of 85 days or less. Francois Fressin, an astronomer at the Harvard-Smithsonian Center for Astrophysics in Cambridge, and his colleagues found that the Milky Way should contain about 17 billion Earth-sized planets, but not all of those would lie in the habitable zone.

Charbonneau emphasizes that his team's findings are preliminary, and the researchers declined to discuss them in detail. But early last year, when the study had just begun, Charbonneau said that the final results could have an enormous impact on the study of exoplanets. If Earth-sized planets in the habitable zone are abundant in the nearby reaches of the Galaxy, they should be easily found by relatively small ground-based telescopes, such as the array that Charbonneau’s team is now assembling at the Cerro Tololo Inter-American Observatory in Chile.

Such planets would then be ideal candidates for study by NASA's James Webb Space Telescope, planned for launch in 2018. Even large ground-based telescopes such as the twin 10-metre Keck instruments in Hawaii might be able glean something about the composition of these potentially life-friendly orbs, he said.