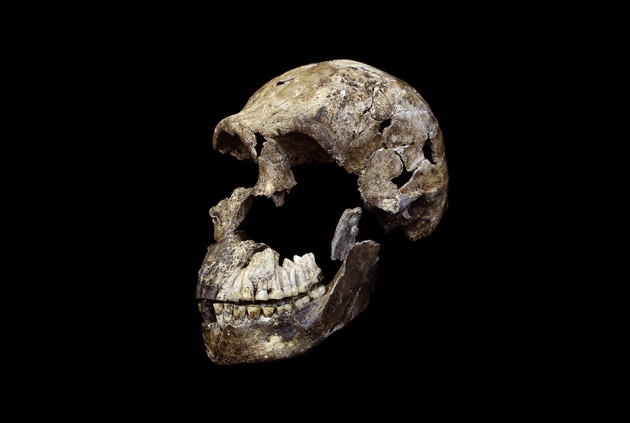 The skull of a Homo naledi, dubbed 'Neo', discovered in a second chamber in South Africa's Rising Star cave system.

An early human species with a curious mix of archaic and modern features lived in South Africa just a few hundred thousand years ago, researchers have found. Dubbed Homo naledi, the species had a small, fist-sized brain similar to that of ancient hominin species that lived millions of years earlier. But it may also have overlapped with ancestors of Homo sapiens, and, its discoverers contend, might even have made tools.

H. naledi was uncovered in the Rising Star cave system in South Africa in 2013, where a team led by palaeoanthropologist Lee Berger, at the University of Witwatersrand in Johannesburg, found a huge trove of ancient human bones and teeth. Now, Berger and his colleagues say that they have dated those remains to between 335,000 and 236,000 years ago, and that they have since discovered more of the species’ skeletons. Their findings are detailed in three papers published in eLife1, 2, 3 on 9 May.

The date is “astonishingly young for a species that still displays primitive characteristics found in fossils about 2 million years old”, says Chris Stringer, an anthropologist at the Natural History Museum in London. The brain of H. naledi came close in size to that of very early members of the Homo genus, and of ancient australopiths — and was only slightly larger than that of a chimpanzee. Its curved fingers and its shoulder, trunk and hip joints also seem ancient, Stringer says. “Yet the wrist, hands, legs and feet look more like those of Neanderthals and modern humans, and the teeth are relatively small and simple, and set in lightly built jawbones.”

When Berger and his colleagues first announced H. naledi, in September 2015, they had not yet dated its remains. Now, the team says that it has nailed down a date range using six methods — including comparing ratios of radioactive isotopes of uranium and thorium, and a technique called electron-spin resonance that measures changes over time in the energy states of electrons in crystals of tooth enamel. The approach looks “very good” and the different methods are consistent, says Jean-Jacques Bahain, a specialist in fossil dating at the Department of Prehistory at the National Museum of Natural History in Paris.

Although H. naledi’s morphology looks old, the context in which the fossils were found and the extent of their fossilization shows that they are relatively young, says Fred Spoor, an evolutionary anatomist at University College London. After the discovery of a 'hobbit' species called Homo floresiensis in Indonesia — a hominid with ancient-looking features that could be as young as 50,000 years old — it is less of a shock that “something [looks] so old at a young age”, he says.

Despite the young date for the H. naledi fossils, in evolutionary terms, their morphological features suggest that they could still lie close to the origin of the genus Homo, says Stringer — a date that’s thought to be as far back as 2.8 million years ago.

A mix of ancient and modern

According to Berger, the find also suggests that H. naledi was likely to have shared cognitive traits with modern humans, such as making and using tools; its modern-like hands were capable of manipulating tools, he says. Although no stone tools were found alongside H. naledi, Berger contends that similarly aged tools from southern Africa could have been made by the species — and not early Homo sapiens, as most archaeologists had assumed. “Archaeologists will have to provide extraordinary evidence to show that they know who the maker of any other tools [in southern Africa] is. They have to prove it is not Homo naledi,” he said.

Stringer is more cautious. “It is certainly probable that H. naledi’s handiwork is out there,” he says. “But until H. naledi fossils are found with associated tools, we won’t know. I don’t think we should rewrite the archaeological record of southern Africa yet.”

Berger has also suggested that the Rising Star cave discovery represents the oldest known deliberate body disposal — or burial — in human history. The new discovery of a second chamber in the cave system with more H. naledi remains makes that more likely, he says.  But Stringer is doubtful. “Although no other satisfactory explanation for the deposition of the remains has yet been proposed, many experts, including myself, consider such complex behaviour [burial of the dead] unlikely for a creature with a brain size close to that of a gorilla, particularly when a requirement for the controlled use of fire (for lighting) probably has to be added in,” he says.

The find shows there’s much to discover in Africa, which remains largely unexplored, Stringer says. At around 300,000 years ago, there were probably at least three kinds of humans across the continent, including early Homo sapiens, and H. naledi, he says. “Who knows what else might be out there?”