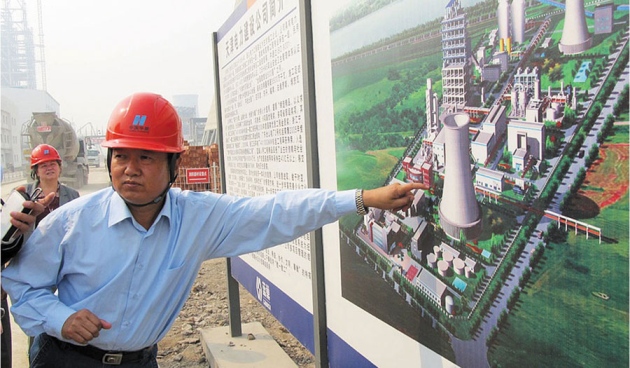 Despite delays, China’s GreenGen coal-fired gasification power plant in Tianjin is going ahead.

With many of the world’s nations dragging their feet on cleaning up fossil-fuel emissions, even slow progress stands out. This spring, China’s state-owned Huaneng Group plans to fire up the first phase of its flagship clean-coal demonstration project, moving the country one step closer to capturing and storing the carbon it emits. Despite being more than a year behind schedule, the GreenGen coal gasification plant in Tianjin puts China at the forefront of global efforts to exploit coal resources without releasing carbon dioxide.

In 2008, leaders of the G8 group of nations called for the development of 20 large-scale projects demonstrating technologies for carbon capture and storage (CCS) by 2010, but countries have been slow to embrace the costly plants. Delays and cancellations have affected all but a handful of high-profile initiatives in Europe, the United States and Australia, whereas China, despite delays of its own, is still pushing forward to develop indigenous technologies.

“GreenGen represents both a high degree of technical sophistication and a real commitment on China’s part to clean-energy technology,” says Julio Friedmann, head of the carbon-management programme at Lawrence Livermore National Laboratory in Livermore, California. “There can be no doubt that China has achieved something remarkable.”

Originally estimated to cost US$1.5 billion, GreenGen is being developed by a consortium of Chinese companies, including Huaneng, together with Peabody Energy of St Louis, Missouri. The first phase is a 250-megawatt integrated gasification combined-cycle power plant, which will convert coal into ‘syngas’ — a mixture of carbon monoxide and hydrogen — to be burned in specialized turbines to produce electricity. Waste carbon dioxide from these processes can be separated more easily than in conventional coal-fired power plants.

Huaneng has already begun work on a second phase — a smaller pilot plant that will send a clean stream of hydrogen through fuel cells and turbines to produce electricity, with carbon dioxide being captured for industrial use. The third phase, scheduled for 2015–20, will be a 400-megawatt power plant with full-scale carbon capture and storage in underground rock layers. That represents a substantial delay beyond the original completion date of 2015. Huaneng officials say that they revised the schedule in response to technical issues and delays to CCS projects in other nations.

GreenGen was originally seen as a follow-up to FutureGen, the flagship US initiative that was promoted and then cancelled by former president George W. Bush. In 2009, President Barack Obama revived the project, but a business consortium has yet to settle on a home for it. Many are sceptical about whether FutureGen and other US CCS projects will come to fruition, given the inability of Congress to craft a comprehensive programme for reducing greenhouse-gas emissions.

The United Kingdom is also trying to renew interest in CCS. On 3 April, the UK Department of Energy and Climate Change relaunched a £1-billion (US$1.6-billion) competition for companies to build CCS demonstration plants. An earlier initiative, launched in 2007, fell apart in 2011 when the last remaining consortium pulled out because of concerns over costs. This time, the UK government has encouraged companies by promising that electricity produced by CCS plants can be sold at premium prices, and it will also provide £125 million for CCS research and development.

Many countries still see potential CCS plants as one-off demonstration projects, but the United Kingdom is trying to create conditions for them to become commercially viable, says Stuart Haszeldine, a geologist working on CCS at the University of Edinburgh, UK. So far, seven consortia have publicly announced their interest in the contest, which aims to commission plants in 2016–20 and store carbon dioxide in porous rock under the North Sea.

Other well-advanced initiatives include Canada’s Boundary Dam Integrated Carbon Capture and Storage Demonstration Project in Saskatchewan, a 100-megawatt project to retrofit carbon-capture technology to an existing power plant; and the Texas Clean Energy Project, a 400-megawatt integrated gasification combined-cycle plant that could begin operating in 2014. Both plan to sell carbon dioxide to oil companies, which use the gas to flush oil out of reservoirs. In the Netherlands, the Rotterdam Capture and Storage Demonstration project aims to begin storing carbon dioxide in depleted gas fields under the North Sea in 2015.

Howard Herzog, a carbon-storage expert at the Massachusetts Institute of Technology in Cambridge, says that the challenge facing the entire carbon-capture industry is how to turn a profit in the absence of a serious carbon policy that rewards emissions-reduction projects financially. “The question is whether there is a CCS market anywhere in the world,” Herzog says. “If there isn’t, why develop the technology?”