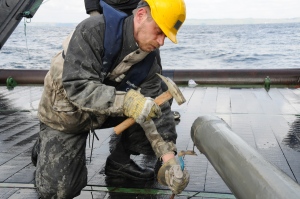 Hans Røy (pictured) and his team identified microbes from deep beneath the sea floor in sediment cores.

Most humans would struggle to last for much more than a minute under water without coming up for air, whereas some seals can manage more than an hour — but a microbial community living tens of metres beneath the Pacific Ocean floor can do even better.

Using so little oxygen that they barely qualify as life, the microbes, discovered by Hans Røy and his colleagues of the Centre for Geomicrobiology at Aarhus University in Denmark, have exceptionally low metabolic rates. And biomass turnover — the replacement of the building blocks essential to life — occurs only once every few hundred or even every few thousand years.

Aerobic microbes require oxygen to generate the energy to maintain an electric potential across their membrane and to keep their enzymes and DNA ticking over. While anaerobic microbes can replace oxygen with sulphate, nitrate or sulphur, this is less energy efficient than aerobic respiration, so the researchers think that the sea-floor critters may be living at the absolute minimum energy requirement needed to subsist. And they must be doing something right: the community of microbial couch potatoes, described today in Science1, is 86 million years old.

For years, scientists thought that the ascetic conditions of the deep sub-seabed — high pressure, minimal oxygen and a low supply of nutrients and energy — made such environments uninhabitable to any form of life. But the discovery of microbial communities living deep in marine sediments has sparked an investigation into how these organisms cope with such extreme energy limitations.

The North Pacific Gyre — a system of high-powered rotating ocean currents — together with its South Pacific counterpart, is the most nutrient-poor region of the oceans. Yet here, Røy's team found oxygen penetrating as deep as 30 metres into the sediment.

“There wasn’t a good explanation for this,” Røy says. “The old way of thinking about it was that there couldn’t be anything deeper than about half an inch, so it was obvious that we were missing something in our understanding. It’s become clear that this missing element is the low sedimentation rate. In this area, the sediment is accumulating at an incredibly slow rate.”

So slowly, in fact, that if a grain lands on the seabed, it will be 1,000 years before another one sits on top of it. This means that anything edible that falls from above also lies at the surface for hundreds or thousands of years, while the bulk of it is consumed. Anything that remains by the time it becomes buried offers a very poor diet, even for microbes, so is eaten very slowly. And, when there is nothing to eat, the bacteria do not breathe and the oxygen just hangs around.

The discovery of this ‘slo-mo life’ prompted Aarhus's geomicrobiology centre and the Astrobiology Division of NASA's Ames Research Center, based in Moffett Field, California, to organize a conference of geomicrobiologists and computer modellers to explore the limits of microbial life and the biological demand for energy. 'Microenergy 2012' was held last week in Aarhus.

“The limits of life are so much further beyond what we have imagined,” explains co-organizer Bo Jørgensen. “Here we appear to see the lower energy limit for life below our current understanding. But we have to say now that we do not know where the lower limit is anymore.”

Which is why NASA is fascinated by the research. The surface of Mars may be inhospitable, but below the surface, says Jørgensen, “there may be conditions that are reminiscent of the deep subsurface on Earth in terms of energy flux available. These studies show that life is able to exist under such conditions.”

Jørgensen stresses that he is not saying this means there is life on Mars, but admits, “it’s now really challenging to show where there is no life”.