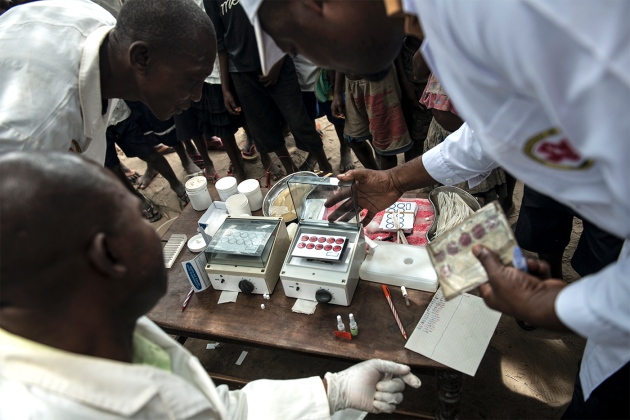 Health workers screen people in a remote village in the Democratic Repulic of the Congo for sleeping sickness.

For the first time, researchers have cured the deadly neurological disease sleeping sickness using pills instead of a combination of intravenous infusions and pills. The investigators presented the results from final clinical trials on 17 October at the European Congress on Tropical Medicine and International Health in Antwerp, Belgium, providing hope that the treatment will help to eliminate the malady within a decade.

The oral therapy — called fexinidazole — cured 91% of people with severe sleeping sickness, compared with 98% who were treated with the combination therapy. It also cured 99% of people in an early stage of the disease who would typically undergo a spinal tap to determine whether they needed infusions. The relative ease of the treatment with fexinidazole means that if approved, it might save more lives than the current option, say the investigators leading the phase 3 trial, the final phase of testing before the drug goes to regulators for approval.

Sleeping sickness is endemic to Africa and generally infects extremely poor people who live in remote regions. The sick often suffer from the disease for years before seeking treatment, causing them and those caring for them to miss work and spend their savings on traditional medicines. Trekking to a hospital and remaining there for intravenous infusions is costly as well.

“It’s not just the person with sleeping sickness, it’s the family that takes care of them during years of this neurological, very serious disease,” says Philippe Büscher, a sleeping-sickness specialist at the Institute of Tropical Medicine in Antwerp, Belgium, who was not involved in the study. “Whatever money they have, they’ll spend on this instead of anything else.”

Büscher commends the team for conducting a quality clinical trial under extraordinary circumstances in countries hit hardest by the disease, the Democratic Republic of the Congo and the Central African Republic. Investigators had to carry equipment to remote clinics over rugged terrain; one study site was repeatedly robbed; and early on in the trial, some participants fled armed conflict. “I need to congratulate them for beautiful work,” Büscher says. 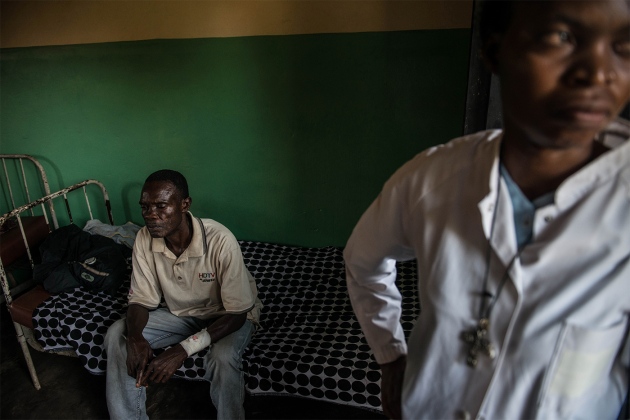 The hospital where Pablo Loela was being treated for sleeping sickness cannot afford to provide food for their patients: families must provide meals for their loved ones.

Sleeping sickness — also known as human African trypanosomiasis — is spread through the bite of tsetse flies carrying parasites, most commonly Trypanosoma brucei gambiense. The organism infects the central nervous system, and patients can experience confusion, daytime sleepiness, night-time insomnia and various psychiatric symptoms, including manic episodes and aggression. If left untreated, they enter a coma and die. For decades, the only treatment was a toxic arsenic-based drug that killed one in 20 patients.

In 2009, researchers introduced a safer option: nifurtimox–eflornithine combination therapy, or NECT, which consists of pills and 14 intravenous infusions. For the first time in 50 years, the incidence of sleeping sickness slipped below 10,000 new cases per year; it’s currently around 2,200, according to the World Health Organization. But the need for infusions, along with the spinal tap required to qualify a patient for the treatment, still present obstacles in regions where sterile equipment, electricity and doctors are in short supply.

The group that developed NECT — a non-profit research organization based in Geneva, Switzerland, called the Drugs for Neglected Diseases initiative (DNDi) — continued searching for a better therapy. In 2007, it discovered fexinidazole, a compound that had been shelved by Paris-based pharmaceutical company Sanofi. With the firm's agreement, the DNDi took the drug through clinical trials. It estimates that developing the therapy through to approval will cost a total of around US$50 million — a fraction of what pharmaceutical companies often spend on new drugs.

Sanofi will soon submit an application for drug approval through the European Medicines Agency, whose sign-off could pave the way for regulators in the Democratic Republic of the Congo. The drug might get a green light by the end of next year, says Nathalie Strub Wourgraft, the DNDi’s medical director. Because it is a simple oral treatment, she suggests that patients might even be treated at home, which would save them and their families the expense of hospital stays.

However, Büscher argues that home treatments could be dangerous because people who don’t respond to fexinidazole could die of the disease if not seen immediately by medical staff. It’s imperative that patients follow up with health workers, he says, and he suggests offering people incentives to return to the clinic, such as money or staples including salt or sorghum. “This is a success,” he says, “but it is not the end.”

DNDi researchers and their colleagues are currently working on what they hope will be an even better oral treatment to cure the disease in a single dose, and more reliably than fexinidazole.