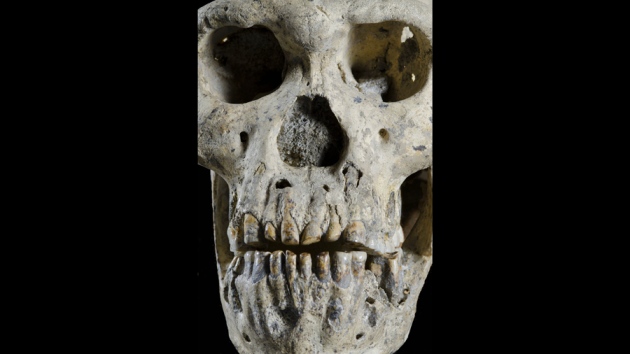 Does pointy-faced “skull 5” reveal that ancient humans had variable anatomical features, rather than being different species?

One of the most complete early human skulls yet found suggests that what scientists thought were three hominin species may in fact be one.

This controversial claim comes from a comparison between the anatomical features of a 1.8-million-year-old fossil skull with those of four other skulls from the same excavation site at Dmanisi, Georgia. The wide variability in their features suggests that Homo habilis, Homo rudolfensis and Homo erectus, the species so far identified as existing worldwide in that era, might represent a single species. The research is published in Science today1.

The newly described skull — informally known as 'skull 5' — was unearthed in 2005. When combined with a jawbone found five years before and less than 2 metres away, it “is the most complete skull of an adult from this date”, says Marcia Ponce de León, a palaeoanthropologist at the Anthropological Institute and Museum in Zurich, Switzerland, and one of the authors of the study.

The volume of skull 5’s braincase is only 546 cubic centimetres, about one-third that of modern humans, she notes. Despite that low volume, the hominin’s face was relatively large and protruded more than the faces of the other four skulls found at the site, which have been attributed to H. erectus.

Having five skulls from one site provides an unprecedented opportunity to study variation in what presumably was a single population, says co-author Christoph Zollikofer, a neurobiologist at the same institute as Ponce de León. All of the skulls excavated so far were probably deposited within a 20,000-year time period, he notes.

The Dmanisi skulls look quite different from one another, Zollikofer says, “so it’s tempting to publish them as different species. Yet we know that these individuals came from the same location and the same geological time, so they could, in principle, represent a single population of a single species.”

The researchers' statistical data seem to back that notion. For example, the volume of skull 5 is only about 75% that of the largest skull unearthed at the Dmanisi site — a disparity that may seem large but that falls within the variation seen among modern humans and within chimpanzees. The variation also falls within the range seen in all hominins worldwide from the era, says Zollikofer.

“Like so many finds, [the skull] adds to what we know, but does not necessarily clarify or simplify things,” says Robert Foley, a paleoanthropologist at the University of Cambridge, UK. Nevertheless, he notes, the results of the new analysis must change the way scientists think about the nature and magnitude of anatomical variation in early Homo.

If the three hominin species inhabiting Earth about 1.8 million years ago were collapsed into one, H. habilis and H. ruldofensis would be subsumed into H. erectus — largely owing to the similarities of the Dmanisi skulls to those known for the latter species, says Zollikofer.

But cramming the three species, which overall inhabited areas from Africa to Indonesia, under the H. erectus umbrella might not be scientifically justified, says Fred Spoor, a palaeontologist at the Max Planck Institute for Evolutionary Anthropology in Leipzig, Germany.

The new study, he says, used statistical analyses of general cranial shape that are not necessarily good at discriminating between species. Rather than those general assessments, he explains, the researchers should have analysed specific anatomical traits, such as the height of the braincase or the diameter of the eye socket. Such easily quantifiable characteristics are typically used to identify species and construct evolutionary family trees.