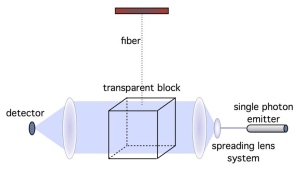 Jacob Bekenstein's proposed experiment fires a photon through a transparent block to check whether space-time is 'pixellated'.

Space is not smooth: physicists think that on the quantum scale, it is composed of indivisible subunits, like the dots that make up a pointillist painting. This pixellated landscape is thought to seethe with black holes smaller than one trillionth of one trillionth of the diameter of a hydrogen atom, continuously popping in and out of existence.

That tumultuous vista was proposed decades ago by theorists struggling to marry quantum theory with Einstein’s theory of gravity — the only one of nature’s four fundamental forces not to have been incorporated into the standard model of particle physics. If it is true, the idea could provide a deeper understanding of space-time and the birth of the Universe.

Scientists have attempted to use the Large Hadron Collider, gravitational wave detectors and observations of distant cosmic explosions to determine whether space is truly grainy, but results have so far been inconclusive. Now, Jacob Bekenstein, a theoretical physicist at the Hebrew University of Jerusalem, has proposed a simple tabletop experiment to find out, using readily available equipment1.

As in previous experiments, Bekenstein’s set-up is designed to examine the problem on the scale of 1.6 × 10−35 metres. This 'Planck length' is thought to mark the scale at which the macroscopic concept of distance ceases to have meaning and quantum fluctuations begin to cause space-time to resemble a foamy sea.

No instrument can directly measure a displacement as small as 10−35 metres. Instead, Bekenstein proposes firing a single particle of light, or photon, through a transparent block, and indirectly measuring the minuscule distance that the block moves as a result of the photon’s momentum.

The wavelength of the photon and the mass and size of the block are carefully chosen so that the momentum is just large enough to move the block’s centre of mass by one Planck length. If space-time is not grainy on this scale, then each photon will pass through the block and be recorded by a detector on the other side. However, if space-time is grainy, the photon is significantly less likely to make it all the way through the block. “I argue that the consequence of that crossing — the translation of the block by a Planck length or so — is something nature would not like,” says Bekenstein.

If quantum fluctuations in length are important on the Planck scale, a sea of black holes, each with a Planck-scale radius, will readily form. Anything that falls into one of those black holes will be unable to escape until the hole disappears. So if the centre of mass of the moving block falls into one of the holes, the block's movement will be impeded (the photons are much larger than the Plank length, and so are not bothered by the miniature black holes).

Conservation of momentum in the experimental set-up requires that the photon cannot make it through the block if the block fails to move by a Planck length. So if fewer photons than expected are seen by the detector, it would indicate that the block's movement has been impeded by black holes, and that space-time exhibits quantum features at the Planck scale.

Bekenstein’s design is simple, so the experiment could easily be put into practice using established methods of generating and detecting single photons, says Igor Pikovski, a quantum physicist at the Vienna Center for Quantum Science and Technology. Nevertheless, he adds, “distinguishing possible quantum gravitational effects from other effects will be very challenging”.

Earlier this year, Pikovski and his colleagues published2 another scheme for probing the graininess of space-time in the laboratory, using optical pulses and and the principles of quantum theory to drive a system from an initial configuration to the desired final state. “The truth is that we do not know at what exact scale quantum gravity will play a significant role,” says Pikovski. “There is plenty of room for granularity at much larger lengths [than the Planck length] and we do not have a full theory that could tell us the answer.” Experiments such as Bekenstein’s or his own may provide some of the first evidence for an answer, he adds.