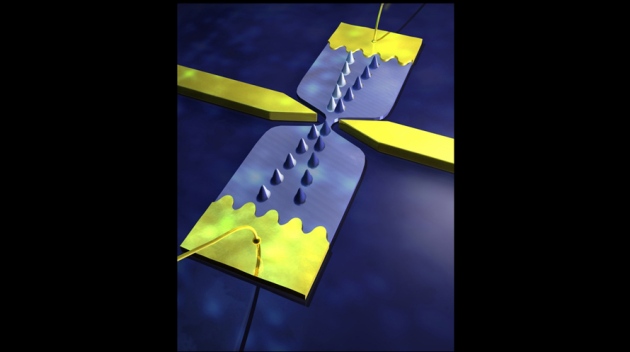 Tiny waves that excite a single electron at a time (pictured here as bumps) as they propagate in the 'electron sea' of a circuit could be the basis of future quantum computers.

Researchers have succeeded in lifting a single charged particle from the sea of electrons in a nanoscale circuit, creating a solitary electron wave. The feat confirms a theoretical prediction made nearly two decades ago, and might enable single electrons to carry quantum information in the same way that photons convey information in quantum optical circuits. Quantum physicist Christian Glattli at the CEA Saclay nuclear research centre in Gif-sur-Yvette, France, and his colleagues describe the work today in Nature1.

To generate the electron wave, or excitation, Glattli and his collaborators used a prediction made 17 years ago by theoretical physicist Leonid Levitov, at the Massachusetts Institute of Technology in Cambridge, and his colleagues2. Levitov's team had calculated that applying a voltage that varies with time to a nanocircuit will typically stir up the sea of electrons in the wires, creating a complex quantum state. This would consist of a swell of energized electrons along with a set of 'holes', where missing electrons leave behind positively charged locations in the atomic lattice of the wire. But Levitov and his team predicted that if the voltage pulse varied in time according to a mathematical expression known as the Lorentzian distribution — a single, symmetrical peak — it would excite only a single electron to the surface of the sea.

Glattli’s team applied just such a voltage pulse to a nanocircuit consisting of two electrodes connected by a narrow conducting region, all cooled to nearly absolute zero (35 millikelvin) to keep the system’s electrons quiescent. The researchers verified that each voltage pulse applied to one electrode produced a single-electron excitation that travelled through the conductor to the other electrode. Such excitations are analogous to the solitary waves — known as 'solitons' — that are sometimes seen moving down a canal while maintaining their shapes. Glattli and his colleagues thus called their electron excitations 'levitons' (Levitov solitons).

Unlike other sources of single-electron excitations, which require the fabrication of delicate nanostructures, the circuitry required for generating the levitons can be easily scaled up to build larger systems, say the researchers.

“The beauty of the work is clearly the simplicity,” says theoretical physicist Peter Samuelsson of Lund University in Sweden, who was not part of the study. Generating levitons on demand “will first and foremost be used as a tool in the investigations of fundamental physics”, he says. Furthermore, levitons could ultimately act as the fundamental carriers of quantum information in solid-state quantum computers, writes theoretical physicist Christian Flindt of the University of Geneva in Switzerland in a related News & Views3 article.

"Essentially everything done with single or pairs of photons in quantum optics — like entanglement generation and detection, quantum teleportation and quantum cryptography — could be tested with levitons," says Samuelsson.