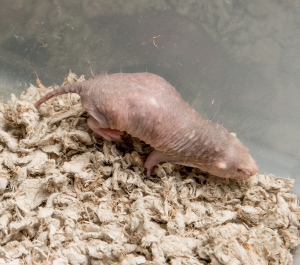 A hardy intercellular matrix may be the key to the naked mole rat's ability to skirt cancer.

Naked mole rats (Heterocephalus glaber), which are more closely related to porcupines than rats, are freaks of nature. The short-sighted creatures spend their lives in subterranean colonies in the service of a single breeding queen — H. glaber is one of only two 'eusocial' mammals ever discovered. The rodent doesn’t feel the sting of acids or the burn of chilli peppers, and seems to be the only mammal that is unable to regulate its body temperature.

However, the animal's longevity and impunity to cancer are the reason why biologist Andrei Seluanov keeps around 80 naked mole rats in a special facility near his lab at the University of Rochester in New York state. The rodents have been known to live for up to 32 years, and scientists have never seen one with cancer. Mice, by comparison, rarely live past the age of four and do often die of cancer.

Ewen Callaway spoke to Andrei Seluanov about his work on naked mole rats' resistance to cancer.

In 2009, Seluanov’s team reported that the naked mole rat's fibroblasts (a cell type found in connective tissue) are sensitive to the presence of other cells, and in Petri dishes they grow less crowded than mouse fibroblasts do2. To the annoyance of his lab workers, the broth they used to nurture the cells often turned so viscous that it clogged the drains.

“Our lab technician was unhappy because she needed to disassemble the system and clean all this gooey stuff,” Seluanov recalls. “I told my graduate student that we have to find out what the gooey substance is — it should be related to their cancer resistance. Of course, at that time it was just a wild guess.”

The team soon discovered that the plumbing problem was the result of a sugar called hyaluronic acid (HA). Fibroblasts ooze HA and, along with collagen and other chemicals, it forms the extracellular matrix that gives tissues their shape and makes skin elastic. Naked mole rats, Seluanov’s team discovered, produce large amounts of long chains of HA.

The researchers suspected that the long HA molecules formed a tight cage around cells, preventing tumour cells from replicating unchecked and essentially nipping 'pre-cancers' in the bud. In tissue-culture experiments, the cells of naked mole rats could be made cancerous by blocking the gene that encodes HA or by increasing levels of a protein that recycles the sugar. Those cells, when implanted under the skin of mice, formed tumours easily.

Vadim Gladyshev, a molecular biologist at Harvard Medical School in Boston, Massachusetts, says that the paper makes a strong case that HA protects naked mole rats against cancer, but adds that other mechanisms are likely to play a part. For instance, when he and his colleagues sequenced the animal’s genome, they identified numerous genes linked to cancer that differ between naked mole rats and other vertebrates3.

Rochelle Buffenstein, a gerontologist at the University of Texas Health Science Center in San Antonio who, with 2,500 animals, is keeper of the world’s largest naked-mole-rat colony, says that it's not clear how HA protects against cancer, but that working out naked mole rat anti-cancer mechanisms will provide insight that could be used against human cancers.

But first, Seluanov’s team plans to translate its work into preventing cancer in lab mice. The researchers hope to use genetic engineering to endow mice with HA molecules like those of naked mole rats. Drugs that lead to the production of long HA molecules may one day prove beneficial in preventing human cancers, he says.