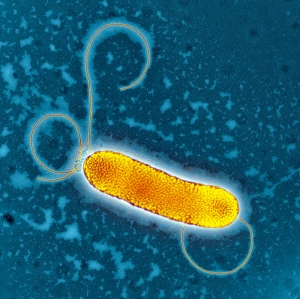 Silver may help in the fight against drug-resistant bacteria such as Stenotrophomonas maltophilia by easing large antibiotic molecules through the microbes' outer coating.

Like werewolves and vampires, bacteria have a weakness: silver. The precious metal has been used to fight infection for thousands of years — Hippocrates first described its antimicrobial properties in 400 bc — but how it works has been a mystery. Now, a team led by James Collins, a biomedical engineer at Boston University in Massachusetts, has described how silver can disrupt bacteria, and shown that the ancient treatment could help to deal with the thoroughly modern scourge of antibiotic resistance. The work is published today in Science Translational Medicine1.

“Resistance is growing, while the number of new antibiotics in development is dropping,” says Collins. “We wanted to find a way to make what we have work better.”

Collins and his team found that silver — in the form of dissolved ions — attacks bacterial cells in two main ways: it makes the cell membrane more permeable, and it interferes with the cell’s metabolism, leading to the overproduction of reactive, and often toxic, oxygen compounds. Both mechanisms could potentially be harnessed to make today’s antibiotics more effective against resistant bacteria, Collins says.

Many antibiotics are thought to kill their targets by producing reactive oxygen compounds, and Collins and his team showed that when boosted with a small amount of silver these drugs could kill between 10 and 1,000 times as many bacteria. The increased membrane permeability also allows more antibiotics to enter the bacterial cells, which may overwhelm the resistance mechanisms that rely on shuttling the drug back out.

“It’s not so much a silver bullet; more a silver spoon to help the Gram-negative bacteria take their medicine,” says Collins.

Vance Fowler, an infectious-disease physician at Duke University in Durham, North Carolina, says the work is “really cool” but sounds a note of caution about the potential toxicity of silver. “It has had a chequered past,” he says.

In the 1990s, for example, a heart valve made by St. Jude Medical, based in St. Paul, Minnesota, included parts covered with a silver coating called Silzone to fight infection. “It did a fine job of preventing infection,” says Fowler. “The problem was that the silver was also toxic to heart tissue.” As a result the valves often leaked2.

Before adding silver to antibiotics, “we’ll have to address the toxicity very carefully”, says Fowler. Ingesting too much silver can also cause argyria, a condition in which the skin turns a blue-grey colour — and the effect is permanent.

Collins says that he and his colleagues saw good results in mice using non-toxic amounts of silver. But, he adds, there are ways to reduce the risk even further. “We’re also encouraging people to look at what features of silver caused the helpful effects, so they can look for non-toxic versions,” he says.