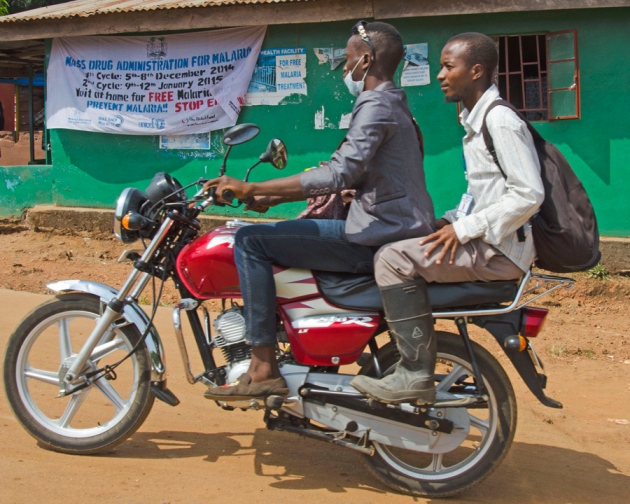 Two men on a motorbike pass a banner announcing a malaria prevention initiative in Sierra Leone.

Sogbandi Botton was hired by the government to track down people who show symptoms of Ebola and deliver them to medical care. But Botton, a medical student, says that most of the health complaints he has heard lately can be traced to the side effects of a malaria drug. “People are vomiting and tired,” he says. “Two of them couldn’t even stand up.”

In early December, public-health workers distributed malaria medication to 2.52 million people in Sierra Leone. The effort was meant to curb the number of malaria cases as the disease approaches its peak season, and reduce, in turn, the number of people whose symptoms could be mistaken for those of Ebola. The government is planning another mass distribution in mid-January.

But the side effects of the drugs can limit the efficacy of this approach, known as mass drug administration (MDA). People report fatigue and nausea — side effects that can be intensified if they have taken too many pills at once or have taken the drugs on an empty stomach. As word has got around about these problems, some people have opted not to take the medicine as directed, or at all.

“I don’t know the right dose, and I’ve heard different things,” says Fatamata Kamara of Kroo Bay, a slum in the capital Freetown. “I know it made some people very sick, and I’m afraid to go to the hospital and get Ebola,” she says.

But Kamara’s reluctance to take the malaria drug increases the likelihood of that very problem. Because malarial fevers are similar to Ebola fevers, anyone with a fever is told to check into a clinic to be tested. There, people with malaria wait hours or days for diagnosis beside others who may have Ebola. And fear of contracting the virus seems to have kept malaria patients from seeking treatment: in August 2014, the number of children diagnosed with the parasite was half what it was in the same month of 2013.

Gentler preventive treatments for malaria have been rolled out in Mali, Senegal and other African countries. But resistance to those drugs in Sierra Leone led authorities to choose a combination of the most powerful antimalarial drug ingredient, artemisinin, with the drug amodiaquine — even though this treatment is known to have side effects that include nausea and dizziness. The combination was also chosen because Sierra Leone’s 6 million people routinely take it as a malaria treatment, says Samuel Smith, who manages the country’s malaria programme.

Sierra Leone has hired more than 8,000 health workers to distribute the drugs, with support from Médecins Sans Frontières (MSF, also known as Doctors without Borders), the United Nations Children's Fund and the Global Fund to Fight AIDS, Tuberculosis and Malaria. According to a preliminary government survey, 75% of the people who got the pills reported taking them appropriately. But interviews with about 30 people in and around Freetown suggest that number may be much lower.

Smith says that before the next round of administration, public-health messages will “hammer home” the importance of taking the correct dose. Without 85% compliance, he says, the effort put into the initiative might outweigh its benefits. To determine how well the programme works, health officials will compare the frequency of self-reported fevers among people who received the pills and those who did not, and they will also note adverse events.

“It’s very important to monitor this because if it’s good, we’d want to use it again during another outbreak or a war, or any emergency that prevents people’s access to medical care,” Smith says.

In April, the World Health Organization (WHO) plans to meet to determine the value of this intervention. “There will be a heated debate about whether to do MDA, and in what circumstance,” says Maru Aregawi, a researcher in the WHO’s global malaria programme.