It has been a medical mystery for 67 years, ever since the British geneticist Anthony Allison established that carriers of one mutated copy of the gene that causes sickle-cell anaemia are protected from malaria1. The finding wasn’t trivial: in equatorial Africa, where Allison did his work, up to 40% of people are carriers of this mutated gene. Since then, scientific sleuths have wondered how exactly the gene protects them.

With a paper published today in Science2, the answer — or a large part of it — seems to be at hand. 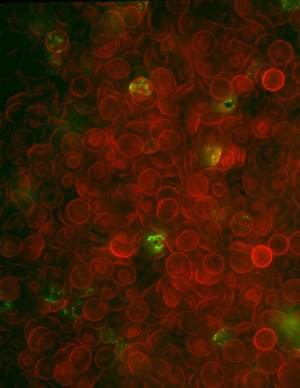 Sickle cells infected with Plasmodium falciparum (green) collapse and prevent the parasite from interfering with the cell's actin proteins, protecting the host against malaria.

Michael Lanzer and his colleagues at Heidelberg University in Germany and the Biomedical Research Center Pietro Annigoni in Ouagadougou, Burkina Faso, used powerful electron microscopy techniques to compare healthy red blood cells both with 'normal' cells infected with the malaria parasite Plasmodium falciparum and with infected cells from people carrying the mutated “S” gene that causes sickle-cell disease, as well as another mutation, dubbed “C,” which occurs at the same spot. Both mutations lead to the substitution of a single amino acid in the hemoglobin molecule, causing the haemoglobin to aggregate abnormally inside the cell. In people with two copies of the S mutation, they deform into a half-moon shape — the 'sickle cells' that give the disease its name..

The researchers saw that in healthy red cells, very short pieces of actin filament — threads of protein crucial to maintaining the pliable internal 'skeleton' that lets the red blood cell squeeze through tiny blood vessels — are clustered just under the cell's outer membrane. But in infected cells, they observed that the malaria parasite steals this actin and uses it to construct an intracellular bridge to transport a parasite-made protein to the cell surface. This protein, called adhesin, makes the infected red blood cells 'sticky', causing them to adhere to each other and to the vessel wall to cause the widespread microvascular inflammation characteristic of malaria.

Evolution to the rescue

The parasite doesn't get everything its own way, however. Enter the sickle-cell factor. In red blood cells containing the aberrant sickle-cell haemoglobin, Lanzer and his team observed that the hijacking of actin filaments by the parasite was hobbled. The actin bridge was cut off from the intracellular depot of adhesin, and the vesicles that would normally transport the adhesin to the cell surface were floating free in the cytoplasm.

Further experiments led the team to hypothesize that ferryl haemoglobin, produced when the mutant haemoglobin reacts with oxygen, subverts the parasites’ efforts to reorganize their host cells' actin by preventing the actin proteins polymerizing to form long filaments.

The take-home message, says Lanzer, “is that the parasite, in order to survive within the red blood cell, has to remodel the host actin — and that evolutionary pressure has resulted in mutations in human haemoglobin that prevent this remodelling.”  People who carry just one mutated copy of the sickle-cell gene still make enough normal haemoglobin and so are largely asymptomatic. So being a carrier confers a survival advantage in countries where malaria is endemic.

The finding is a big breakthrough, says David Sullivan, an associate professor at the Johns Hopkins Malaria Research Institute in Baltimore, Maryland. “This was a holy grail in the hunt for the pathogenesis of malaria.”

Sullivan notes that other recent work3, 4 has established that adhesin-containing 'knobs' on the surface of parasite-infected cells are abnormal in number and distribution when the cells have the mutated haemoglobin, and that the 'stickiness' of infected cells is diminished accordingly. “This kind of nails how that might happen,” he says.

Rick Fairhurst, a malaria expert at the National Institute of Allergy and Infectious Diseases in Bethesda, Maryland, and an author on both of those papers, says the new study takes the work “a huge step forward". He says that Lanzer, with his “absolutely fabulous”  images, “clearly beat us to the next step”.

In the meantime, Lanzer says, a logical next step will be to try to identify the factors in the parasite that allow it to coopt the host cell’s actin for its own ends. “If we can identify them,” he says, “one can envision developing inhibitors. But it is a very long shot.”