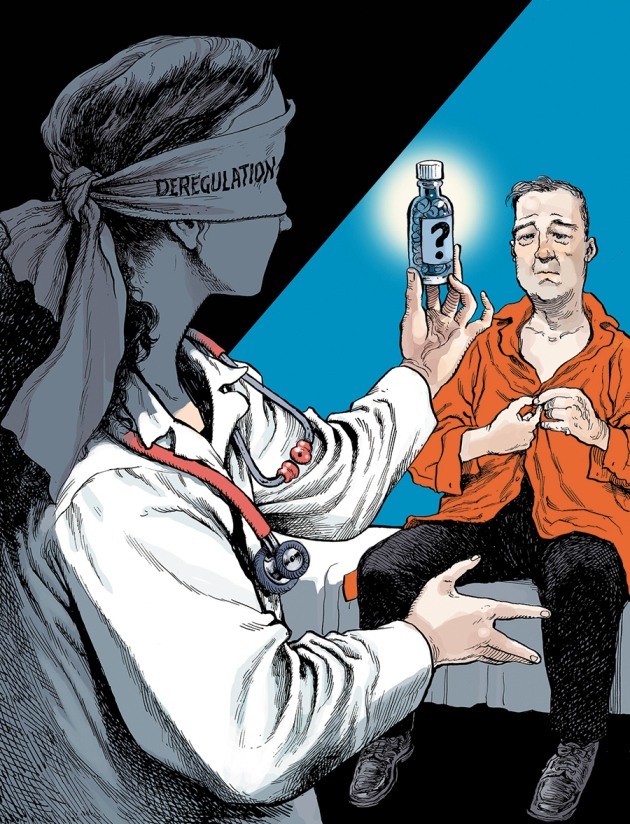 Under US President Donald Trump, defunct economic arguments about prescription drugs are coming to the fore. His advisers contend that today's system is a bad deal. They want to undo regulations that require companies to show that a medical product actually works before it is sold. The advisers argue that removing the burden of large, lengthy clinical trials will cut costs and reduce delays, and that the marketplace can be trusted to sort good drugs from bad ones.

Although many have raised concerns about a Trump Food and Drug Administration (FDA; see, for example, Nature http://doi.org/bz92; 2017), few have debunked the economic arguments. Here we outline what the case for deregulation gets wrong. All nations should take note — weaker standards for entry of drugs onto the US market will harm health everywhere.

Knowledge of the history is important. The 1938 US Food, Drug, and Cosmetic Act required only that drug safety be demonstrated. In 1962, new legislation demanded that marketed drugs also go through well-controlled studies to test for therapeutic benefit. More than 1,000 medical products were subsequently withdrawn after reviews found little or no evidence of efficacy1. The free market that existed before 1962 revealed no connection between a drug's ability to turn a profit and its clinical usefulness. The same is likely to be true of any future deregulated market.

Economic arguments against the FDA's requirements for efficacy date back to at least the early 1970s. Originally these were advanced by libertarians and neoliberal economists at think tanks such as the American Enterprise Institute in Washington DC. Since the early 2000s, the Manhattan Institute for Policy Research in New York City has added its voice. Some economists posit that regulatory agencies are systematically biased towards excessive caution, and that the burden of testing a drug's efficacy before it comes to market outweighs the benefits.

They argue that 'bad' drugs can be identified quickly after they go on sale, whereas harms caused by the unrealized utility of 'good' drugs are often invisible (see go.nature.com/2hymtel). Such reasoning has led prominent economists, including Nobel prizewinners Milton Friedman, Gary Becker and Vernon Smith, to recommend that efficacy requirements be weakened or abandoned.

An overly stringent system will err by withholding or delaying safe and effective 'good' drugs from patients. Critics of existing regulations often point to the case of a treatment for Hunter syndrome — a rare, inherited degenerative disease in which the absence of a crucial enzyme can be fatal. Trials of the enzyme-replacement drug Elaprase (idursulfase) meant that, for a year, a group of children received a placebo instead of the drug that was eventually shown to be effective2.

Conversely, a lax regulatory system will subject patients to 'bad' drugs that may be toxic. The iconic example is the more than 10,000 birth defects caused worldwide by the drug thalidomide, a late 1950s remedy for nausea during pregnancy. Even in the past dozen years, initially promising drugs, such as torcetrapib (for reducing cholesterol and heart-disease risk) and semagacestat (for improving cognition in people with Alzheimer's disease), were found to cause harm only after they had been tested in large, mandatory trials — effects that were not seen in the smaller trials3.

The most extreme proponents of deregulation argue that the market can serve as the sole arbiter of utility: if a medicine is selling well, it must be delivering value4. A more moderate view is that reliable information on efficacy can be collected after a drug goes on sale, through uncontrolled observational studies and other post hoc analyses.

There is a third type of error that these arguments neglect (see ‘The good, the bad and the useless’). Untested drugs can be reasonably safe but provide no benefit.

The good, the bad and the useless

Unregulated markets are hopeless at sifting out these 'futile' drugs (witness the multibillion-dollar industries in homeopathy and other pseudo-medicines), unlike the current system. In January 2017, the FDA released a report identifying 22 products that were initially promising but disappointed in later-stage clinical trials: 14 for lack of efficacy, 1 for lack of safety, and 7 for both reasons3.

Futile drugs, even the non-toxic ones, cause real harms. They waste money for both patients and taxpayers. Marketing useless drugs wastes industry resources that could be used in developing effective therapies, squanders opportunities for patients to receive beneficial medical care, engenders false hope in miracle cures, and leads to cynicism about the value of research.

Some countries, including South Korea and Japan, have allowed cell biologics such as stem and immune cells onto the market without requiring them to show compelling evidence of efficacy. This might boost the domestic drug industry, but lowers the value of local health care. These products have not been authorized for sale in any other countries.

Europe should beware too. Lower drug-quality requirements in the large US market could make firms that adhere to the higher standards in the European Union less competitive.

Arguments for deregulation fail to recognize that valuable information has a cost. Drug companies cannot afford to generate reliable evidence for efficacy unless their competitors are all held to the same high standards. Efficacy requirements level the playing field and ensure that the health sector receives the data needed to inform good therapeutic and economic decisions. The government, insurers, patients and others need to know whether medicines are likely to provide benefits. Patients and physicians must have access to reliable information to make educated and ethical choices.

Rigorous clinical studies are still the best way to learn whether a drug works, and regulation is essential to ensure that these studies are conducted. Pre-specified endpoints, controls, randomization and blinding cannot be discarded without sacrificing actionable clinical information5.

Once a drug is on the market, it is hard to gather solid efficacy data. Blinding and randomization in clinical studies can be compromised when money changes hands and, historically, compliance with monitoring requirements has been poor. One analysis found that only 13% of post-market studies required by the FDA had been completed between 1990 and 1999 (see go.nature.com/2mayocv). And a survey of 20 drugs approved by the FDA in 2008 found that fewer than one-third of post-market study commitments had been fulfilled by 2013 (ref. 6). Marketed drugs are also unlikely to be withdrawn because of a lack of efficacy7.

The FDA's gatekeeper role makes the medical marketplace function. The economic benefits of good research and a healthier population will be lost without incentives to find truly effective drugs.

J.E.J.R. is Director of Pathology and a shareholder at the IVF company Genea. He has a management/advisory relationship with the Cure The Future Foundation (honorary Board Member), FSHD Global Research Foundation (honorary Scientific Patron) and New Directions in Leukaemia Research (honorary Scientific Committee member). He is President-Elect 2016–18 of the International Society for Cellular Therapy, which may have links to companies and affiliations with interests in medical technology development. He chairs the RPA Hospital Institutional Biosafety Committee and has chaired the federal Gene Technology Technical Advisory Committee of the Office of the Gene Technology Regulator, Australian Government, for the past ten years. His Department of Cell & Molecular Therapies is involved in clinical development of gene-modified cells, often in collaboration with companies such as Miltenyi, Terumo, Sillajen, Athersys, Cynata and Novartis. Some or all of these are covered by confidential disclosure agreements. He has had paid consulting relationships and/or travel support, as follows: (i) Honoraria for speaking and/or as part of clinical trials by GSK, Spark, Novartis, bluebird bio; (ii) Rarecyte (past scientific consultant, stocks in lieu); (iii) Imago (scientific consultant). His employer, Sydney Local Health District, NSW Government, assisted with travel as part of his salary package for training education and service leave.