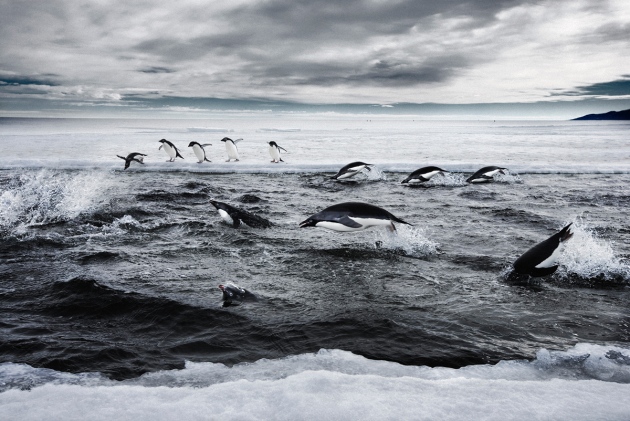 John B. Weller, Courtesy of The Pew Charitable Trusts

The Ross Sea and other Antarctic marine ecosystems are under increasing pressure, but proposals to turn them into marine sanctuaries failed this week to gain an international body's approval.

Ambitious plans to protect millions of square kilometres of Antarctic seas have been sunk by a surprise objection from Russian diplomats.

There was widespread hope that new reserves in the Ross Sea and in Eastern Antarctica would be approved this week at an international meeting in Bremerhaven, Germany. The plans had the backing of scores of scientists, as well as non-governmental organizations (NGOs) and the US, UK and New Zealand governments, and would have safeguarded species including penguins, seals and fish. Fishing vessels are increasingly targeting Antarctic waters.

One proposal, to protect the Ross Sea, originated from the United States and New Zealand and would have banned fishing in 1.6 million square kilometres of sea, creating the world’s largest marine reserve and also establishing a special zone for scientists to research the impact of climate change and other changes in the region. A separate proposal, championed by Australia, France and the European Union, would have created seven protected areas off the east coast of Antarctica.

But today at the meeting the Russian delegation questioned the very authority of the Commission for the Conservation of Antarctic Marine Living Resources (CCAMLR), which regulates fishing in Antarctica, to create reserves, several participants said. To establish any reserve requires the agreement of all 25 members.

This objection has enraged NGOs, who pointed out that CCAMLR (pronounced 'cam-lar') has already created one such ‘marine protected area’ surrounding the South Orkney Islands and that all of the commission’s members had previously agreed in principle that it should create such zones. NGO representatives accused Russia of coming in bad faith to the meeting, which was convened specifically to discuss the marine reserves after they were not agreed to at a meeting last year.

“Everyone here is very disappointed,” says Steve Campbell, campaign director at the Antarctic Ocean Alliance, a coalition of groups pushing for more marine protection in the region. “There is no doubt CCAMLR has authority to establish these areas.”

Campbell says that he still has faith in CCAMLR’s ability to effectively manage the region's waters, but said that the commission had “staked its reputation” on the issue. The two proposals will be considered again at CCAMLR's annual meeting in Hobart, Australia, in October.

Although there is hope that the reserves may yet be approved, Russia’s hard-line approach to this week’s meeting casts a long shadow and raises serious doubts about the chances of approval in Hobart.

Andrea Kavanagh, director of the Southern Ocean Sanctuaries campaign run by the Pew Charitable Trusts, an NGO based in Washington DC and Philadelphia, Pennsylvania, told Nature she was “frustrated and sad” at the outcome in Bremerhaven.

“This objection from Russia is out of the blue,” she says. “It’s going to need some high level diplomatic outreach to Russia [to resolve].”