Underwater footage taken off an island in the Philippines revealed that when they hunt, thresher sharks first stun their prey by unleashing a powerful shockwave with their tails.
KLEMENS GANN

Thresher sharks can use their lengthy tail fins to swat sardines from shoals, researchers have found by taking underwater footage. Such tactical use of the tail fin during hunting — which was previously observed only in mammals such as dolphins and killer whales1 — might indicate that sharks are more intelligent than scientists thought.

Pelagic thresher sharks (Alopias pelagicus) are nocturnal and notoriously shy. Researchers have long suspected that the shark uses its tail — which makes up half of its body length — to stun its prey, but the behaviour has not been documented before under natural conditions2.

Simon Oliver, lead investigator of the Thresher Shark Research and Conservation Project, and his colleagues studied the sharks off the coast of Cebu, an island in the Philippines. Oliver, who is based at the University of Liverpool, UK, has been watching the animals during the day since 2005, but he hadn’t seen the sharks hunting until some divers saw it happening and phoned him. “Immediately I dropped everything and went to investigate,” he says.

The sharks hunt by first lunging into a school of fish, priming their tails as they move in. They then swipe the tail in a trebuchet-like motion through an arc of 180o in just one-third of a second — fast enough to both physically hit the fish and to create a stunning shock wave (see image below). Each strike can take out up to seven sardines, so Oliver thinks it is probably the most energy-efficient way for the animals to hunt. The team published the results today in PLOS ONE3. 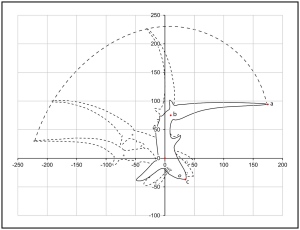 From a sequence of video still images, researchers found that the sharks' tails turn by as much as 180o in just one-third of a second [click on image to enlarge].

The hunting technique has been observed only now, says Oliver, because a lack of food has prompted the sharks to hunt near the surface during the daytime. Although the region of the ocean that the team studied is poorly monitored, he says sardine stocks there are under pressure from commercial fishing.

Marine ecologist Nigel Hussey at the University of Windsor in Ontario, Canada, says that the study does prove convincingly that thresher sharks hunt using their tails. “It seems reasonable to think that the hugely elongated tail of the threshers evolved to help the sharks hunt in this fashion,” he says. “If that’s true, then fisheries that reduce the population of schooling foraging fish like sardines could be specifically dangerous for this species.” But he cautioned that scientists still know little about what else threshers might eat, noting that this may not be their only hunting tactic.

The deeper insight, according to Hussey, is that threshers could be smarter than biologists once thought. “We’re seeing mounting evidence of that,” he says. “Definitely this work shows that sharks have enough intelligence to work out a relatively sophisticated and effective hunting strategy.”

However, although the predators did feed in small groups in a similar way to dolphins, Oliver says it might be going too far to call this social cooperation.