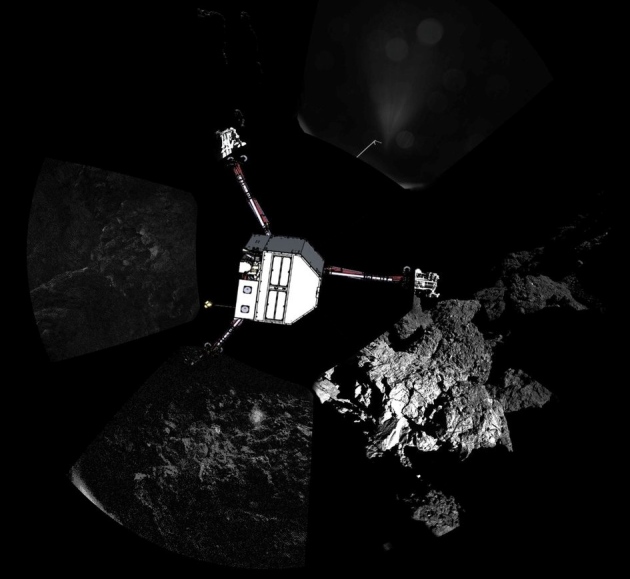 Mission scientists superimposed a representation of the Philae probe on top of this panoramic view taken from an onboard camera.

The Philae lander's drill is now working, but the craft's batteries — designed to power just 2.5 days of operations — are running low, Rosetta mission scientists said at a briefing today (14 November). Thus the craft, which landed on comet 67P/Churyumov–Gerasimenko on 12 November, could be entering its last hours of operations.

Drilling got under way, seemingly without drama, at around 13:40 Central European Time (CET). But soon after, Philae went into another communications blackout, due to rotation of the comet. If the lander's batteries run out before the next communications window — after 22:00 CET this evening — data reaped from the subsurface sample are likely to be lost.

Commands that would have put Philae into an energy-saving mode unfortunately failed to transmit, Valentina Lommatsch of the German aerospace centre (DLR) said during the briefing. “It’s going to be really close as to whether we make it to the link or not.”

Currently, Philae can do nothing with the tiny amount of sunlight it is getting on a single solar panel. If the lander makes contact with the Rosetta orbiter this evening, scientists might try last-ditch efforts to get more power for Philae. These manoeuvres could include rotating the lander or even hopping Philae into a new position. “We’re hoping we can maybe bounce our way out, but it’s very unlikely,” said Lommatsch. “We’re throwing around ideas right now.”

Rosetta is now back in an orbit 50 kilometres from the comet. Holger Sierks, principal investigator on Rosetta’s OSIRIS camera, said that his team was scouring images taken in the hours after Philae’s first landing for signs of the lander, which would appear as a 3 × 3 pixel speck and could lead scientists to its hiding place.

Philae, the plucky comet lander from the European Space Agency's Rosetta mission, was confirmed today as alive and well, but sitting in a precarious position.

After Philae hit its target on comet 67P/Churyumov–Gerasimenko on 12 November, its harpoons failed to deploy, leaving the lander unsecured. The data it beamed back to Rosetta — which is orbiting the comet and relays information to mission control — suggested that it had bounced twice before coming to rest. But information was in short supply, because soon after the landing, the mothership went beyond the comet’s horizon, severing communications. 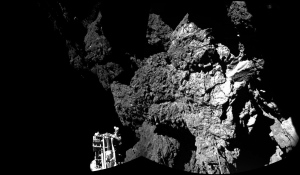 The first image sent back from the comet surface.

Data transmitted to Earth today (13 November) revealed that the lander is now stable and that its instruments are working, but that it is stuck, probably at a steep angle, against the bottom of a cliff. The first picture released from Philae shows one of the lander’s three feet against a craggy backdrop (see picture at right). Later, the agency released another image, this time a panoramic view showing the position of the probe's feet. The mission team also superimposed a sketch of the lander suggesting its position (see picture at the top).

In a briefing to journalists today at the European Space Operations Centre in Darmstadt, Germany, Philae lead scientist Jean-Pierre Bibring said that the cliff means Philae is largely in the shade, which could be a problem for powering long-term operations. Philae’s primary batteries will last only 64 hours after separating from Rosetta, and by the time of the briefing at 2 p.m. Central European Time, 28 hours had already elapsed. Once its batteries run dry, Philae will be relying on solar panels. From its shady zone, Philae will get just 1.5 hours of sunlight every 12 hours, said Koen Geurts, Philae's technical manager at the German aerospace centre (DLR) in Cologne.

In a separate briefing to journalists in France, Marc Pricher, director of the Toulouse site of the French space agency CNES, described Philae’s location as what could be the opening a cave, or perhaps next to a boulder. The constraints on power would mean that Philae’s work programme would have to be adjusted, he said.

Furthermore, the fact that Philae is unsecured means that it could be difficult for its drill to obtain samples of the comet, because the mechanical action will create a reaction force that could make the craft bounce again, or tip. “Drilling without being anchored … is dangerous,” said Stephan Ulamec, Philae lander manager. Drilling will certainly not happen today but is not ruled out, added Bibring.

Securing Philae by again attempting to fire its harpoons could also be dangerous for the same reason, Ulamec explained to journalists on the evening after the landing. The comet's gravity is 100,000 times weaker than that on Earth, and if the harpoons failed to hook on to the surface, the momentum could push the lander back up into space, he said. “That would be highly embarrassing.”

On-board instruments revealed that after accurately hitting its target site, Philae bounced as high as 1 kilometre from the surface, Ulamec added. It fell back to the ground two hours later, bouncing a second time with a shallower hop lasting a few minutes, before settling in its current position.

Rosetta has yet to locate the lander with its cameras. But data from Philae’s radar device suggest that the lander ended up around 1 kilometre from the site where it first touched down.