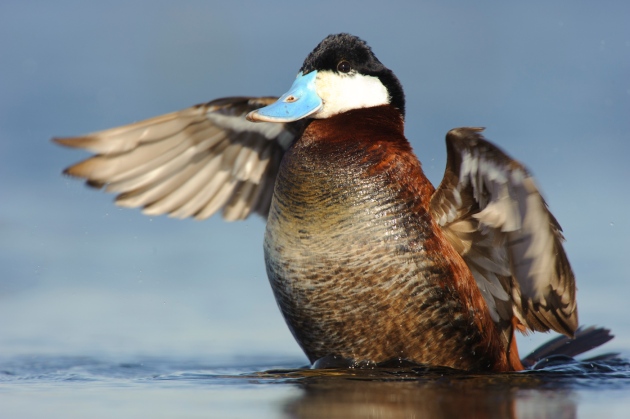 Male ducks respond to sexual competition by growing either an extra-long penis or a nub of flesh, a new study finds. The unusual phenomena occurred in two species studied: the lesser scaup (Aythya affinis) and the ruddy duck (Oxyura jamaicensis). It suggests that penis size — in line with many traits and behaviours meant to impress or allow impregnation of the opposite sex — involves a trade-off between the potential to reproduce and to survive.

Patricia Brennan, an evolutionary biologist at Mount Holyoke College in South Hadley, Massachusetts, compared the penises of ducks kept in male–female pairs to those housed with multiple males per female. The findings are published in a study on 20 September in The Auk: Ornithological Advances1.

“If they were alone with a female, the males just grew a normal-sized penis, but if there were other males around, they had the ability to change dramatically,” Brennan says. “So evolution must be acting on the ability to be plastic — the ability to invest only in what is needed in your current circumstance.”

Because evolutionary success relies on reproduction, genitals are adapted to meet the varied circumstances that every animal faces. Some male ducks, for example, have penises in the shape of corkscrews to navigate the labyrinth-like vaginas of their female counterparts. An earlier study by Brennan found that females’ anatomy evolved to prevent access to undesirable males who force copulation2. To mate successfully with their chosen partners, Brennan says, female ducks assume a posture that allows males to enter them fully and deposit sperm near eggs.

However, evolutionary changes in the size of body parts are generally thought to happen over generations, not within an individual’s lifetime. Brennan wondered whether ducks might buck this trend because some species’ penises emerge anew every breeding season and degenerate afterwards. Similarly, acorn barnacles (Semibalanus balanoides) — hermaphroditic, shelled sea creatures cemented to rocks — generate their penises only when it's time to mate. Because they use their penises to grope for other barnacles to inseminate, the organ’s length depends on the proximity of a barnacle’s neighbours. 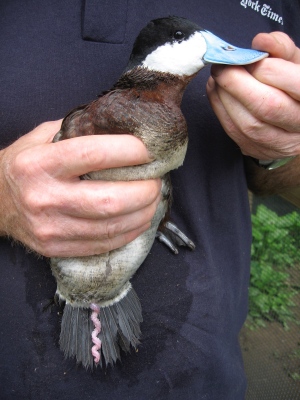 Some ruddy ducks grew longer penises to compete for mates.

Brennan and her colleagues fenced off habitats so that ducks would live either in pairs or in groups with almost twice as many males as females for two breeding seasons over the course of two years. The lesser scaups grew longer penises when they were forced to compete for females than when they were coupled up. A larger reproductive organ likely improves their chances of fertilizing an egg.

But the results of the social environment on ruddy ducks were more complicated. During the first year, only the largest males in the groups grew long penises (about 18 centimetres each), whereas smaller males developed half-centimetre stubs. In the second year, smaller males grew normal-sized penises, but they lasted for just five weeks, whereas the largest males kept their penises for three months.

Clues may lie in the drama of ruddy-duck life. The birds have some of the largest penis-to-body ratios found in nature — with penises sometimes longer than their bodies. “I can’t imagine they could grow any longer,” Brennan says. The birds have also been known to fight to the death, which suggests that smaller ruddy ducks might be too stressed to develop penises normally. “Bullying may increase stress hormones, and those could counteract the effects of androgen hormones” that control penis growth, Brennan says.

This response to stress could be adaptive. The same androgen hormones that trigger penis growth every season in birds also underlie colouration. They cause the duck’s feathers to turn from dull brown to chestnut when it’s time to breed, and their bills to go from grey to bright blue. To females, the wardrobe change signals a male’s readiness. To neighbouring males, it foreshadows a fight. “I think the small ones go through it quickly so that there’s less danger of getting beaten up,” Brennan says.

The study is “really interesting”, says Charlie Cornwallis, an evolutionary biologist at Lund University in Sweden. “This suggests there is a cost to having a large penis because individuals are investing according to the competition they face from other males.” Cornwallis says that few studies have investigated the effect of environmental and social conditions on penis size, and that these evolutionary trade-offs could be more common than imagined.

Families who picnic at the Livingston Ripley Waterfowl Conservancy in Litchfield, Connecticut, where the study was conducted, overlook the birds’ bargains as well. “People watch the ducks on the weekends, but they have no idea what’s really going on,” Brennan says. “I now have a love–hate relationship with ducks.”