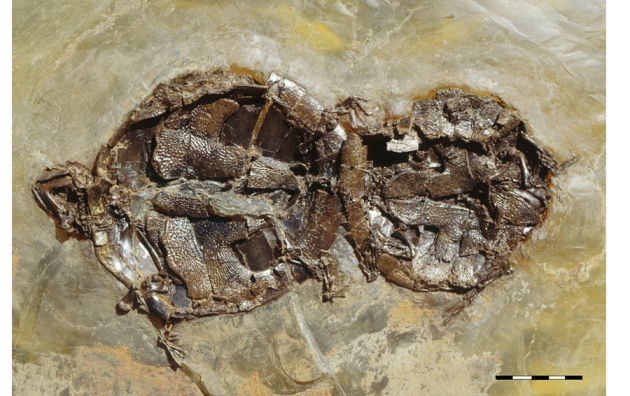 The fossil turtle pairs are the first known example of prehistoric sex.

The moment of orgasm has sometimes been called the “little death”, but several pairs of prehistoric turtles may have died before they reached that moment. Palaeontologists have discovered fossilized turtles in flagrante delicto.

The description of the 47-million-year-old fossils from Germany’s Messel shale is published today in Biology Letters1. The study, led by Walter Joyce of the University of Tübingen in Germany, provides the first direct evidence of prehistoric turtle sex. “The Messel Lake fossil site has produced tens of thousands of fossils, but only these turtles are found in pairs,” says Joyce. The puzzling pairs have raised eyebrows for years, but Joyce and colleagues have now confirmed that the turtles died in a mating embrace.

As with modern turtles, the sexes of the fossil turtles — Allaeochelys crassesculpta — can be distinguished by characteristics of their shells and tails. Females have a hinge on their shells that is thought to allow them to lay eggs, and, unlike in females, males' tails extend past the edge of the shell. Also, most of the paired turtles were found with “their rear ends oriented towards one another” indicating that the turtles were in close contact just before death, Joyce points out, and in two specimens, “the tails of the partners are aligned with each other”. The aligned tails, he says, are “the true smoking gun that allowed us to conclude that the turtles died while mating”.

Exactly why so many turtles and other animals accumulated in the Messel lake is a mystery. One idea is that the lake periodically belched toxic gases that killed creatures in and around it. Another is that the surface waters occasionally filled with toxic cyanobacteria, poisoning aquatic organisms and whatever creatures drank from the lake. Joyce envisions a scenario of comfortable shallows and deadly depths.

Like their living cousins, the fossil turtles probably stopped swimming when they started mating. The pairs then sank through the water column, but Messel Lake held a hidden danger. Below the surface waters, palaeontologists have hypothesized, was a layer poisoned by volcanic gases or rotting organic material. Since the skin of some turtles can act as a respiratory membrane, the turtles were killed as the poisons accumulated in their bodies. “Many animals enter a trance-like state when mating or laying eggs, and it is possible that these turtles simply did not notice that they were entering poisonous waters before it was too late.” Joyce says. Ultimately, the same harsh conditions on the bottom kept their bodies safe from scavengers as sediment accumulated on top of them.

The fate of the turtles may help explain the ecology of the prehistoric lake. "The mating turtles tell us that the surface waters of Messel Lake were hospitable enough to allow turtles to live and mate, but that animals would die accidentally when they sank during mating into relatively shallow, poisonous subsurface layers," Joyce says.

Edwin Cadena, a doctoral student in palaeontology at North Carolina State University in Raleigh, agrees that the study shows “strong evidence to consider this the first case of coupling captured in the fossil record of vertebrates”. More controversial, he says, is the interpretation of what the Messel lake was like. The notion of a stratified lake works as an explanation for the turtles’ fate, Cadena says, “but not so well for other fossils found at Messel, for example bats or birds or even other small mammals”. If the upper layers of the lake were inhabitable, Cadena asks, then what caused the death of airborne and terrestrial animals? The turtles are just part of an ongoing fossil mystery.