RESEARCH
Telescope rivals A scientific panel has narrowly recommended South Africa over Australia as the best site for the proposed Square Kilometre Array (SKA), a US$2.1-billion international radio telescope (see Nature 480, 308–309; 2011). But the project's voting member states have yet to make the final call on where the telescope will go. Despite the SKA Site Advisory Committee's recommendation, both sites are still in contention, a source told Nature. The final choice could come as soon as 4 April. See go.nature.com/gwfejy for more.

Tevatron ♡ Higgs Before it was shut down last year, the Tevatron particle collider at Fermilab in Batavia, Illinois, gathered data from proton–antiproton collisions that seem to support the existence of the elusive Higgs boson predicted by the standard model of physics. The results, announced on 7 March at the Moriond conference in La Thuile, Italy, do not reach a level that physicists would consider statistically significant. But they are consistent with reports in 2011 of a Higgs particle with a mass of around 125 gigaelectronvolts, from experiments at the Large Hadron Collider at CERN, Europe's high-energy physics lab near Geneva, Switzerland. See go.nature.com/cd3rma for more.

POLICY
FDA improvement Scientists who work for the US Food and Drug Administration have greater respect for their leaders and more confidence in the agency's future than they did five years ago, according to a survey of 997 researchers (see go.nature.com/cv5gi6) published on 7 March by the Union of Concerned Scientists in Washington DC. But researchers are still uneasy about their rights to publish work that might be considered contentious, and to talk to the press and public about their findings, the survey showed. They were also worried about corporate and political influence on the agency's decisions.

Antarctic repair The Brazilian government last week laid out plans to rebuild and modernize the country's Antarctic research station, which was mostly destroyed by a fire on 25 February. No money has yet been allocated for construction, but the science ministry has committed more than US$5.5 million in new grants to rebuild research projects, and funds to replace lost scientific equipment. See go.nature.com/wluzf1 for more.

Oil-spill restoration Restoration efforts in the Gulf of Mexico are likely to receive around 80% of the pollution fines that the US government collects from oil giant BP as a result of the 2010 oil spill in the region. On 8 March, the US Senate passed a bill (the RESTORE the Gulf Coast Act) that would approve this allocation of funds, which would otherwise go to the US Treasury. Federal fines, which are separate from private settlements, are expected to range from US$5 billion to $20 billion. The bill is now attached to a transportation bill that awaits passage through Congress.

Water scarcity The world needs to rethink its policies on managing freshwater resources, which are being severely threatened by climate change and a growing population, warned the United Nations Educational, Scientific and Cultural Organization on 12 March. The Paris-based organization launched its triennial World Water Development Report at the start of a meeting to discuss the problem in Marseilles, France. See page 256 for more.

PEOPLE
Brain prize Two women who studied genes involved in hearing share this year's Brain Prize, a €1-million (US$1.3-million) annual award given to European neuroscientists since 2011 by the Grete Lundbeck European Brain Research Foundation in Copenhagen. Christine Petit of the College of France and the Pasteur Institute in Paris identified genes underlying different types of deafness. Her co-winner, Karen Steel of the Wellcome Trust Sanger Institute in Hinxton, UK, mapped key mouse genes involved in the function of cochlear hair cells, which pass sounds to the brain. 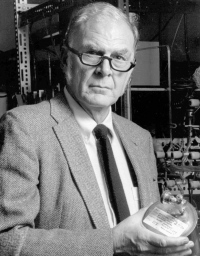 Nobel chemist dies Frank Sherwood ('Sherry') Rowland (pictured), co-winner of the 1995 Nobel Prize in Chemistry, died on 10 March aged 84. One of the world's most famous climate scientists, in 1974 he reported with Mario Molina that chlorofluorocarbons (CFCs) were helping to destroy the ozone layer. Rowland advocated banning the chemicals; his work led to the Montreal Protocol in 1987. He continued to study atmospheric pollution until his death, and won the Nobel prize for his ozone research. Rowland was also a founder member of the University of California, Irvine. See go.nature.com/hpmb8j for more.

Ocean dives Mixing showbiz, adventure and science, movie director James Cameron says that he intends this month to dive solo to the bottom of the 11-kilometre-deep Mariana Trench in the Pacific Ocean. On 8 March, Cameron, together with the US National Geographic Society, announced his plans — as part of a documentary — to take the first manned visit to the trench since the Trieste submersible visited the Challenger Deep region in 1960. British billionaire entrepreneur Richard Branson is also hoping to reach the trench, although his Virgin Oceanic mission is suffering delays.

Retraction spree A Japanese anaesthesiologist who published work without ethics approval from an institutional review board has been fired by his university and had eight papers retracted, with many of his others under suspicion. Toho University in Tokyo said on 6 March that it had dismissed Yoshitaka Fujii on 29 February after an investigation. On 7 March, the journal Anesthesia & Analgesia published an expression of concern about 24 other papers by Fujii, and said that its editors had spent two years following up allegations of research misconduct — one made as early as 2000 but not followed up until recently.

BUSINESS
Indian generics In a landmark ruling, the Indian Patent Office has allowed a domestic firm to sell a generic version of a patent-protected anti-cancer drug so that the treatment is affordable. Under a compulsory licence granted on 12 March, German pharmaceutical giant Bayer must allow Natco Pharma in Hyderabad to make and sell its patented drug Nexavar (sorafenib) in return for 6% royalties on net sales. Natco will charge patients 8,800 rupees (US$176) a month; Bayer was charging 280,000 rupees. Bayer may challenge the licence, which is permitted under the World Trade Organization's Agreement on Trade-Related Aspects of Intellectual Property Rights. 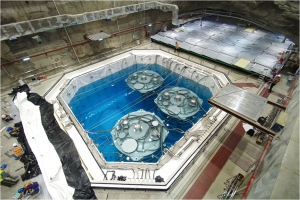 EVENTS
Success for China's neutrino test The final parameter needed to quantify the rate at which neutrinos change ('oscillate') from one form to another has been precisely measured by a neutrino-detection experiment in southern China. The Daya Bay Reactor Neutrino Experiment (pictured), on the Dapeng Peninsula near Hong Kong, monitors electron antineutrinos produced by nearby nuclear power plants. Its measurement, reported on 8 March, pips efforts by reactors in Japan, France and the United States. It also validates experiments that plan to compare the rates of neutrino and antineutrino oscillations, to test the symmetry between matter and antimatter. See go.nature.com/9yssr1 for more.

Space weather A strong geomagnetic storm hit Earth on 9 March last week, three days after the Sun spat out a large solar flare. No serious damage was reported, although such solar flares can cause radio blackouts and affect satellite navigation systems. About 200 geomagnetic storms of this intensity (G3) are expected for every 11-year solar cycle, according to the US government's Space Weather Prediction Center in Boulder, Colorado. As the Sun approaches its solar maximum in 2013, more are expected. 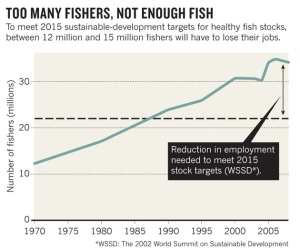 TREND WATCH
To reduce pressure on fish stocks to a sustainable level by 2015, the worldwide fishing effort must be scaled back by 36–43% of 2008 levels, according to an analysis by researchers at the Food and Agriculture Organization of the United Nations in Rome (Y. Ye et al. Fish Fish. http://doi.org/hq8; 2012). That would mean cutting the jobs of between 12 million and 15 million fishers (see chart), and would cost up to US$358 billion — but it would increase production in the long term.

COMING UP
19–23 March
The latest developments in nuclear-powered spaceflight are discussed at the Lunar and Planetary Science Conference in The Woodlands, Texas. It marks the 50th anniversary of the launch of the first nuclear-powered satellite.
go.nature.com/inloal