Polar-bear payout A federal scientist has won a $100,000 payout from the US Department of the Interior, which had accused him of publishing false data in a paper reporting that four polar bears had drowned in the Arctic (C. Monnett and J. S. Gleason Polar Biol. 29, 681–687; 2006). Charles Monnett was cleared of any misconduct last year after a government investigation (see go.nature.com/dfio5o), and he subsequently filed a whistleblower complaint. In the settlement, announced on 4 December, Monnett also agreed to retire from his post at the Bureau of Ocean Energy Management in Washington DC.

Data chief The US National Institutes of Health (NIH) is getting into big data in a big way. On 9 December, the NIH named pharmacologist Philip Bourne of the University of California, San Diego, as its first permanent associate director for data science. Bourne’s office will handle NIH-wide initiatives involving big data from fields such as genomics and electronic medical records. He will start at the NIH in 2014.

Criminal suspect An ongoing criminal investigation into the state-funded Cancer Prevention and Research Institute of Texas (CPRIT) has nabbed a suspect. On 3 December, a Texas attorney general filed an indictment against Jerald Cobbs, former chief commercialization officer for CPRIT in Austin, for allegedly awarding an US$11-million grant to the Dallas-based drug company Pelotron Therapeutics without approval from the proper review committee. For more on concerns at CPRIT, see Nature 486, 169–171 (2012). 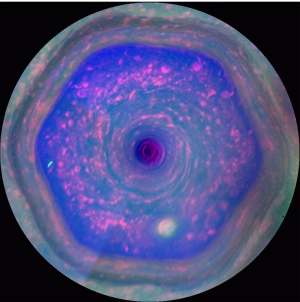 Saturn’s six-sided storm NASA last week released high-resolution videos of a hexagonal jet-stream pattern, about 30,000 kilometres across, around the north pole of the gas giant Saturn. The images, snapped by the Cassini spacecraft, show in detail the stream of 320-kilometre-per-hour winds that was first spotted by the Voyager probe in the early 1980s.

Dementia cases The number of people living with dementia around the world is now estimated to be 44 million, up 22% from three years ago, according to a report released on 5 December by Alzheimer’s Disease International (ADI), a worldwide federation of Alzheimer’s disease associations. As people live longer, cases of dementia will triple to 136 million by 2050, the ADI says. See go.nature.com/ikdput for more.

Palm-oil pledge Singapore-based agribusiness giant Wilmar International announced on 11 December that it would no longer operate or purchase from palm plantations made on recently deforested land. Palm oil is used in many food products and to produce biofuels, and the expansion of palm plantations has driven massive deforestation in places such as Indonesia and Malaysia. Wilmar is the world’s largest palm-oil supplier.

UK spending The UK government will spend £270 million (US$441 million) over the next five years on a network of centres for quantum technology, Chancellor of the Exchequer George Osborne announced last week. In an annual budget statement, he added that the country would remove caps on student numbers at universities (allowing more money to flow to science courses), and spend £375 million over five years in building research capacity in collaboration with ‘emerging powers’ such as China. See go.nature.com/wbxama for more.

Animal welfare The treatment of laboratory animals at one of the United Kingdom’s most prestigious universities has been severely criticized by an independent review, set up in the wake of an undercover investigation by an animal-rights group. Imperial College London’s animal-research facilities are under-resourced and operating without adequate systems for supervision and ethical review, found the report, which was published on 10 December. See page 187 and go.nature.com/4dxlf4 for more.

Planetary hole Researchers at NASA’s planetary science division are grumbling that a reshuffle could see them miss out on grants next year. Under a newly formed programme, announced on 3 December, research funding has been sorted into five large themes — but the biggest area, Solar System workings, will not be calling for funding proposals until 2015. The gap is worrying some scientists who are used to living from grant to grant — and are already concerned by shrinking budgets. See go.nature.com/ntui1n for more.

Global Fund cash The Global Fund to Fight AIDS, Tuberculosis and Malaria secured US$12 billion in firm funding pledges for the next three years at a meeting with donors in Washington DC last week. The amount was more than the $9.2 billion in firm pledges that the fund, based in Geneva, had obtained in 2010 for the period 2011–13. But it fell short of the $15 billion the fund sought. 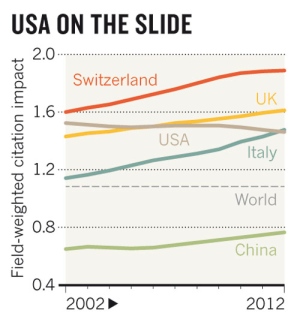 US quality ranking The United States is sliding down the ranks of research quality as measured by the relative citation impact of its papers, according to a study commissioned by the UK government (see graph). It was overtaken in the rankings (normalized for field) by the United Kingdom in 2006 and by Italy in 2012, say figures from SciVal Analytics, the analysis arm of publishing firm Elsevier. But the United States remains well ahead in terms of its share of the world’s top 1% cited articles.

HIV hope dashed HIV has reappeared in two people who had seemed to be free of the virus after receiving bone-marrow transplants. The two men were treated in 2008 and 2010, respectively, and in July doctors said that the pair had remained free of HIV for eight months after they stopped taking antiretroviral medication. But the virus has returned, researchers said last week; a disappointing but not surprising result given that the transplanted cells were not resistant to HIV (unlike in the case of the successfully cured ‘Berlin patient’, Timothy Ray Brown). See go.nature.com/vy2eas for more.

Bacterial genomes DNA sequencing company Pacific Biosciences has announced an effort to fully sequence the genomes of 3,000 bacterial strains over three years. The company, based in Menlo Park, California, said on 3 December that it would collaborate with the Wellcome Trust Sanger Institute, near Cambridge, UK, and Public Health England, whose National Collection of Type Cultures will provide the bacterial strains. The 93-year-old collection contains more than 5,000 bacterial strains, including many human and animal pathogens.

Gene testing Personal-genomics company 23andMe will no longer provide health-related information to new customers, the firm said on 5 December. The move came in response to a 22 November warning letter from the US Food and Drug Administration (FDA) telling the company, which is based in Mountain View, California, to stop marketing its genetic-testing service as a medical device without approval (see Nature http://doi.org/qdm; 2013). A class-action lawsuit, filed against the firm on 27 November in the Southern District of California, accuses it of false advertising for selling its saliva-testing kit without the FDA’s blessing.

Clinical-trial data Drug firm Pfizer has joined companies that are opening up access to their clinical-trial information (see Nature 495, 419–420; 2013). The company, which is headquartered in New York, said that it would consider requests for anonymized patient-level data from trials completed more than two years ago if the trial products were approved or discontinued. Summaries of the ‘clinical study reports’ (CSRs) for approved products will also be published online. The AllTrials group, which campaigns for more access to clinical-trial data, said that the statement contained loopholes ­— such as excluding ‘off-label’ studies — and that full CSRs should be available.

Pricey pill On 6 December, the US Food and Drug Administration approved sofosbuvir, a pill for hepatitis C made by Gilead Sciences in Foster City, California. Unlike older, injected therapies, sofosbuvir can be administered without being accompanied by interferon, which has toxic side effects. The course of treatment will cost $84,000 — $1,000 per pill. 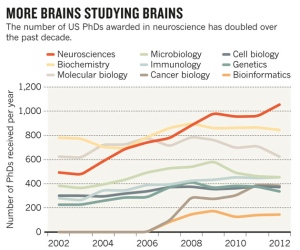 The latest release of the US National Science Foundation’s survey of earned doctorates in the United States reveals the remarkable rise of PhDs in neuroscience over the past decade compared with other biological disciplines. Doctorates in that field have more than doubled, whereas the total number of doctorates has increased by only 27%. Other fast-growing disciplines include bioengineering (382% rise) and computer sciences (228%).

−94 °C
The coldest temperature ever recorded on Earth. NASA satellites pinpointed the low in Antarctica, where the previous record of −89.2 °C was measured in 1983.
Source: NSIDC

14 December
China’s Chang’e-3 spacecraft attempts to land on the Moon.