Deforestation down Deforestation in the Brazilian Amazon fell by more than 20% between August 2011 and July 2012, according to an early — and uncertain — analysis released on 2 August by Brazil’s National Institute for Space Research. The preliminary figures are based on coarse satellite data, but suggest that deforestation is likely to hit a record low for the fourth season in a row. See go.nature.com/gzuthw for more.

H5N1 moratorium Researchers should continue a self-imposed moratorium on lab studies that give new properties to the highly pathogenic avian influenza virus H5N1, according to Anthony Fauci, director of the US National Institute of Allergy and Infectious Diseases. Fauci was speaking at a meeting of flu researchers in New York City. The moratorium has been in place since late January; it was originally planned to last 60 days. See go.nature.com/3zwwq5 for more.

India’s Mars hopes The Indian cabinet has approved a small, 4.5-billion-rupee (US$81-million) orbiting mission to Mars, which could be launched as early as November 2013. Approval came at a meeting on 3 August, according to the Indian national press agency. The orbiter would be the country’s first interplanetary probe and would be carried by the same home-grown rocket used to launch its 2008 Moon probe, Chandrayaan-1.

Primate transport Air China said on 31 July that it would stop shipments of non-human primates for research. The move followed sustained campaigning from animal-rights group People for the Ethical Treatment of Animals (PETA), based in Norfolk, Virginia, which has led to many major air carriers refusing to fly primates bound for research centres (see Nature 483, 381–382; 2012). PETA says that China Eastern is the only major airline now known to be flying primates out of China — the country that last year transported more than 70% of the primates bound for US labs. See go.nature.com/ckhq93 for more. 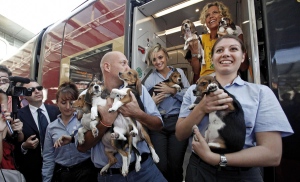 Italian dog-breeding facility at risk One of the largest suppliers of beagles (pictured) for mandatory drug testing in Europe could struggle to survive after an Italian court ordered its temporary closure and granted guardianship of the dogs to the animal-rights groups that filed charges of maltreatment. At an appeal hearing on 3 August, the Green Hill facility in Montichiari, Italy, was told that its staff could re-enter the buildings, but that guardianship would not be returned. By 6 August, some 1,400 beagles had been placed in private homes; they will not be allowed to return to Green Hill because they could bring pathogens into the facility. See go.nature.com/t7am4p for more.

Mars landing NASA announced on 6 August that its Mars rover, Curiosity, had successfully landed in Gale Crater after an 8-month journey and a violent 7-minute fall through the planet’s thin atmosphere. See page 137 and nature.com/curiosity for more.

Higgs papers Researchers at ATLAS and the CMS, the two main physics experiments at the Large Hadron Collider near Geneva, Switzerland, posted their papers describing a new Higgs-boson-like particle to the online preprint server arXiv.org on 31 July (ATLAS Collaboration http://arxiv.org/abs/1207.7214 (2012) and CMS Collaboration http://arxiv.org/abs/1207.7235; 2012). The signals reported at the beginning of July are still there, and have gained significance well above five standard deviations. See go.nature.com/ivkhou for more.

Olympic biology The UK government plans to transform the London Olympics drug-testing laboratory in Harlow into a national bioanalytics centre, Prime Minister David Cameron announced on 1 August. The MRC–NIHR Phenome Centre will use equipment purchased for anti-doping tests to probe biological samples for biochemicals such as proteins and metabolites, with the aim of analysing 100,000 samples per year from massive epidemiology projects. The Medical Research Council (MRC) and the National Institute of Health Research (NIHR) are each putting £5 million (US$8 million) into the project.

Texas grant review The Cancer Prevention and Research Institute of Texas (CPRIT) in Austin has appointed a compliance officer to review and monitor its grant-applications process, it announced on 2 August. Meeting for the first time since controversy erupted over its grant funding, the state-funded institute approved 45 grants, together worth more than US$114 million. Seven of those grants were for multi-investigator projects that had been shelved back in March, when the CPRIT pushed through a $20-million commercial ‘incubator’ award without scientific review. The unusual award prompted the resignation of the CPRIT’s chief scientist and will now be re-reviewed. See go.nature.com/bzrzkc for more. 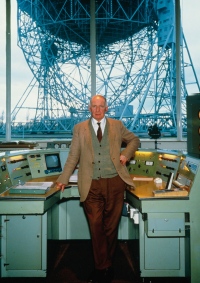 Bernard Lovell dies Physicist and radio astronomer Bernard Lovell, who founded the Jodrell Bank Observatory at the University of Manchester, UK, died on 6 August aged 98. Lovell (pictured) directed the observatory from 1945 to 1980, and in 1957 oversaw the construction of its iconic telescope — then the world’s largest fully steerable radio telescope — which opened in time to track the launch of the first artificial satellite, Sputnik 1. Lovell also worked on radar and cosmic rays; he was knighted in 1961 for his contributions to radio astronomy.

Fermilab change Pier Oddone, the director of the Fermi National Accelerator Laboratory in Batavia, Illinois, announced on 2 August that he would step down from his post in July 2013. Since he started as the high-energy physics lab’s fifth director in 2005, Oddone has overseen the final years of the lab’s Tevatron particle collider and a shift in focus to experiments involving neutrinos and high-intensity (rather than high-energy) collisions. See go.nature.com/2dn9hu for more.

Cold fusion death Electrochemist Martin Fleischmann, who claimed to have discovered cold fusion, died on 3 August aged 85. He and Stanley Pons, both at the University of Utah in Salt Lake City, sparked worldwide controversy in 1989 when they announced to the world’s media that they had fused deuterium atoms at room temperatures. Other scientists quickly debunked the experiments, and the claims have not been substantiated.

Gene-test regulation Personal-genetics company 23andMe announced on 30 July that it was seeking approval from the US Food and Drug Administration (FDA) for its genetic tests related to health — but not for those for non-medical information such as ancestry, or traits such as eye or hair colour. The firm, based in Mountain View, California, had previously maintained that it did not need FDA oversight because it provides information, not a medical service. See go.nature.com/cinowb for more.

GM patent win One of the largest ever US patent settlements saw biotechnology giant Monsanto awarded $1 billion on 1 August in a dispute with chemical company DuPont over genetically engineered crops. Monsanto, based in St Louis, Missouri, argued that DuPont’s agriculture subsidiary Pioneer Hi-Bred (now DuPont Pioneer) in Johnston, Iowa, infringed a Monsanto patent on Roundup Ready crops, which are resistant to the herbicide glyphosate. DuPont violated the patent by making soya beans that mingled the Monsanto trait with its own herbicide-resistant technology, the jury concluded. DuPont says that it will appeal the verdict.

Cancer vaccine The biotech firm behind the first approved cancer vaccine will slash 41% of its workforce, after tepid sales of its Provenge (sipuleucel-T) therapy for some prostate cancers. Dendreon, based in Washington, Seattle, saw Provenge approved in 2010 but doctors in the United States have not raced to prescribe the expensive (US$93,000) treatment (see Nature 476, 376–377; 2011). Dendreon hopes to market the vaccine in Europe by 2013.

Alzheimer’s setback Research has been halted on a keenly watched experimental drug aimed at treating Alzheimer’s disease after it failed two late-stage clinical trials. Pharmaceutical companies Johnson & Johnson, based in New Brunswick, New Jersey, and Pfizer, based in Groton, Connecticut, said on 6 August that they would no longer work on the monoclonal antibody bapineuzumab. It binds a peptide, amyloid-β, that may cause neurodegeneration in patients with Alzheimer’s. But in two phase III trials — one reported on 23 July and one on 6 August — the drug did not prevent cognitive decline. 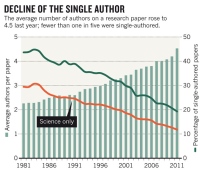 Research papers with a single author are becoming a rare breed, show data for 2011 from Thomson Reuters’ ScienceWatch newsletter. Last year, less than 20% of papers in the sciences, social sciences, arts and humanities had single authors (see chart). In the sciences alone, single-author papers were down to 12%. At the other end of the spectrum, 2011 saw some 600 papers written by more than 100 authors, and 146 papers that had more than 1,000 authors — most of them in physics.