POLICY
Global Fund pain The economic crisis is taking its toll on the Global Fund to Fight AIDS, Tuberculosis and Malaria, which has cancelled its next funding round and will award no new grants before 2014. The fund, based in Geneva, Switzerland, blamed “substantial budget challenges in some donor countries” in its 23 November announcement. It has been in financial trouble for some time, last year falling well below its fund-raising targets (see Nature 467, 767; 2010), and this year struggling with corruption and the theft of medicines. See go.nature.com/scqaui for more.

Climategate 2? Two years after 'Climategate', when around 1,000 e-mails from the Climatic Research Unit at the University of East Anglia (UEA) in Norwich, UK, were posted online, another set of e-mails has been released. The files, containing some 5,000 e-mails, were anonymously posted on a Russian Internet server on 22 November, a week before the United Nations climate summit began in Durban, South Africa. UEA vice-chancellor Edward Acton said that the university would investigate if it found anything new and serious in the documents, but it hadn't so far. See go.nature.com/fg1cx3 and page 6 for more.

Montreal impasse Although 108 countries now support a movement to amend the Montreal Protocol to regulate hydrofluorocarbons (HFCs) as greenhouse gases, no action on the issue took place at the protocol's annual meeting in Bali, Indonesia, on 21–25 November. Observers reported that India, China and Brazil refused to allow formal discussion. HFCs are used as refrigerants and were introduced to replace chemicals that destroy stratospheric ozone. As potent greenhouse gases, their regulation falls under the United Nations climate framework, but many argue that they would be phased out faster and more cheaply using the Montreal ozone treaty (see Nature 479, 5–6; 2011).

Degraded lands A rapid expansion of agricultural production over the past 50 years has left 25% of the planet's land resources 'highly degraded', according to a United Nations assessment of resources for food and agriculture. The report, released on 28 November by the Food and Agriculture Organization of the UN in Rome, said that global food production would need to rise by 70% by 2050 to feed the growing population; more than 80% of this gain would have to be made on existing agricultural land through more efficient use of land and water resources.

No to French GM ban France's highest court has overturned a national ban on the cultivation of a genetically modified maize (corn) crop, ruling that the government must prove that the crop poses major health or environmental risks. But agriculture minister Bruno Le Maire said that he would work to uphold the ban. The crop, MON 810, is made by US biotech firm Monsanto, based in St Louis, Missouri; the European Union has approved it for planting. France banned cultivation of MON 810 in 2008, joining refusenik countries including Germany and Greece. In September, the European Court of Justice ruled that France had used the wrong procedure to impose the ban, and on 28 November, France's State Council said that this meant the ban was not valid.

Marine reserve Australia has unveiled plans to create one of the world's biggest marine reserves. The proposed reserve, in the Coral Sea off the country's northeast coast, covers around 990,000 square kilometres. But only half the reserve is off-limits to fishing; in other areas, commercial and recreational fishing is allowed. Green politicians and conservation groups have condemned this concession. See page 14 for more. 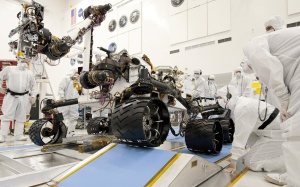 EVENTS
Curiosity bound for Mars NASA's Mars Science Laboratory, also known as Curiosity, is on its way to Gale crater on Mars. The 900-kilogram rover (pictured, being tested on Earth last year) launched on 26 November from the Kennedy Space Center in Florida. It will spend the next nine months travelling to Mars and is scheduled to land in August 2012. Russia's Mars mission, Phobos-Grunt, is not faring so well: stuck in low-Earth orbit, it has missed its launch window and will fall back to Earth early next year. See go.nature.com/lxap2g for more.

BUSINESS
Vioxx fines Drug-maker Merck will pay US$950 million to settle investigations into how it marketed the painkiller Vioxx, the US Department of Justice announced on 22 November. The company, based in New Jersey, had to pull the blockbuster arthritis drug from the market in 2004, after five years of sales. In 2007 it agreed to pay $4.85 billion to settle nearly 27,000 lawsuits that claimed the medicine had caused heart attacks and strokes. Last week's extra payment was expected: Merck had set aside the money in the third quarter of 2010.

Lipitor patent ends The world's best-selling drug, Pfizer's cholesterol-lowering medication Lipitor (atorvastatin) now faces competition from generics, after it lost patent protection on 30 November. The drug has brought in more than US$100 billion in sales for the pharma company, based in New York, which has had to slash research and development funding as it tries to make up for the expected loss in income. See page 16 for more. 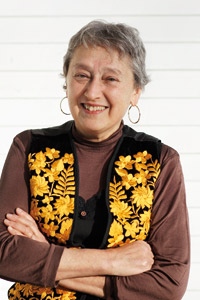 PEOPLE
Margulis dies Biologist Lynn Margulis (pictured), a creative and unconventional scientist best known for her work on the theory of endosymbiosis, died on 22 November aged 73. Margulis pioneered the now-accepted idea that the eukaryotic cell originated in fusions between different bacteria; organelles such as mitochondria and chloroplasts were originally free-living bacteria before they were absorbed by another cell. Margulis won the National Medal of Science in 1999. See go.nature.com/52ixtw for more.

RESEARCH
Google ends RE<C Google has axed an initiative that aimed to make renewable energy cheaper than coal by improving solar thermal power systems. The search-engine giant, based in Mountain View, California, launched the RE<C initiative with great fanfare in 2007 (see Nature 450, 768–769; 2007). On 22 November the company announced it was ending its engineering work on cutting the cost and water consumption of concentrated solar power systems, and would publish its results so far. Google says it still has more than US$850 million invested in other companies' wind, solar and geothermal products.

Chemicals data gap Companies are failing to provide the safety data required by Europe's expansive chemicals law REACH, according to a study by the Centre for Alternatives to Animal Testing at the University of Konstanz in Germany. The study looked at 400 records and found basic information missing on chemicals' developmental and reproductive toxicity. It warns that up to 1.6 million animals might be used in toxicity tests for the 4,599 substances registered so far. Provisional findings were reported in July (see Nature 475, 150–151; 2011). As Nature went to press, the study was due to be published in Alternatives to Animal Experimentation.

Anti-HIV gel fails An antiretroviral gel that seemed able to prevent sexual transmission of HIV to uninfected women has failed in a follow-up study. The Microbicide Trials Network said on 25 November that it would drop the use of vaginal tenofovir gel from the VOICE study — involving 5,029 HIV-negative women in South Africa, Zimbabwe and Uganda — after a routine data review found that it was no better than placebo at preventing HIV. In a previous trial (Q. Abdool Karim et al. Science 329, 1168–1174; 2010), the gel had cut the incidence of HIV by up to 54%. Trials of tenofovir tablets in the VOICE study have also failed (see Nature 478, 10–11; 2011). A third arm of the study, which is trialling another antiretroviral tablet, continues. See go.nature.com/zqtiz6 for more. 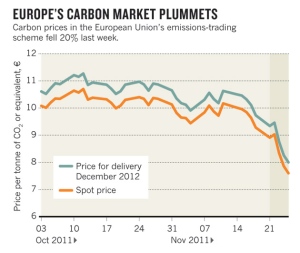 TREND WATCH
A European fund aims to raise €4.5 billion (US$6.0 billion) for clean-energy projects in 2012 by selling 300 million allowances to emit carbon dioxide on Europe's carbon market. But after prices on the market plunged (see chart), such credits would have raised only €2.3 billion as Nature went to press. Analysts forecast that prices will fall further, as the problems behind the slump — weak economic conditions and an oversupply of carbon credits — are likely to persist. See go.nature.com/4xewpb for more.

COMING UP
4–8 December
The triennial World Petroleum Congress — the 'Olympics of the oil and gas industry' — meets in Qatar. The Deepwater Horizon disaster, shale-gas fracking and Arctic exploration are all on the agenda.
www.20wpc.com

5–9 December
Research on the magnitude 9.0 earthquake that struck Japan in March will be presented at the American Geophysical Union's meeting in San Francisco, California.
sites.agu.org/fallmeeting