Drilling setback The US government failed to assess potential environmental impacts adequately when it opened the Chukchi Sea off Alaska to oil drilling in 2008, a federal appeals court ruled on 22 January. In its analysis, the US Department of the Interior used a production estimate of 1 billion barrels of oil, but the court sided with the argument of environmentalists and Native American groups that actual production could be much higher. The ruling could further delay exploration in the region by companies such as Royal Dutch Shell (see Nature 495, 11; 2013).

EU climate package The European Commission unveiled a package of climate and energy proposals on 22 January, with targets for 2030. European Union member states are to reduce their collective greenhouse-gas emissions by 40% relative to 1990 levels (see page 597). The package also includes recommendations for managing shale-gas extraction by fracking, but not the binding environmental regulation that had been under consideration. Instead, the commission will weigh up over the next 18 months whether further legislation is needed.

Pharma patent flap Advocates of affordable medicines expressed outrage last week after leaked documents revealed a proposed public-relations campaign by a lobbying firm in Arlington, Virginia, to stymie drug-patent reform in South Africa. The country is considering loosening patent protections to improve access to cheaper, generic drugs, in line with moves in India and Brazil in recent years (see Nature 500, 266; 2013). The Innovative Pharmaceutical Association South Africa, a trade group based in Randburg, acknowledged receipt of the campaign proposal, but said that the plans had been reviewed and rejected.

Help for headaches Britain’s National Institute for Health and Care Excellence has approved the treatment of migraine headaches with a magnetism-based procedure applied through the scalp. Guidelines issued on 22 January said that transcranial magnetic stimulation (TMS) could be used to reduce headache severity or frequency. However, the agency warned that TMS is not a cure, and that evidence for its efficacy and long-term safety is limited. Last December, regulators in the United States approved the country’s first commercial TMS device to relieve migraine pain. 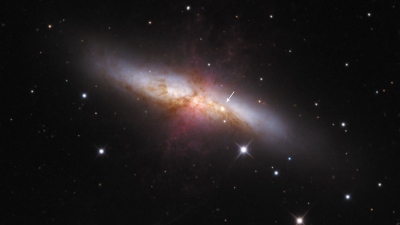 Supernova seen in nearby galaxy Astronomers have spotted one of the closest supernovae in years — in the galaxy M82, about 3.5 megaparsecs (11.4 million light years) away. Students and staff at the University of London Observatory discovered the exploding star in the Ursa Major constellation during a telescope lesson on 21 January. Other astronomers quickly combed through archive data, unearthing earlier, fainter images of the event. Designated SN 2014J, the supernova (pictured) is expected to reach peak brightness in early February. It belongs to the type Ia class of supernovae, formed when one star loses enough mass to a companion white-dwarf star to cause the white dwarf to explode. Owing to their predictable brightness, type Ia supernovae played a key part in the discovery of the Universe’s accelerating expansion. See go.nature.com/wmeet2 for more.

Massive ivory burn Hong Kong is set to incinerate a huge stockpile of about 30 tonnes of seized ivory, following a unanimous decision by the Endangered Species Advisory Committee on 23 January. The government is still working on details of the plan, but destruction of the ivory is expected to begin by mid-2014, and to be complete within two years. Hong Kong’s announcement follows recent, high-profile examples of ivory destruction in the United States and China. See go.nature.com/ib2fpa and Nature http://doi.org/q8g (2014) for more.

Rabbit rescue China’s moon rover has run into major trouble, according to a report on 25 January from state-run news agency Xinhua. The Yutu (‘Jade Rabbit’) rover experienced a “mechanical control abnormality” as it prepared to hibernate over its second lunar night (roughly equivalent to 14 days on Earth) since landing on the Moon last month (see Nature 504, 336; 2013). Scientists are working to resolve the problem, but have released few other details.

Pig virus spreads Canada confirmed its first case of porcine epidemic diarrhoea virus on 23 January. The virus, which causes diarrhoea and vomiting in pigs, was detected on a farm in Middlesex County, Ontario. First identified in the United Kingdom in 1971, the virus can kill 80–100% of infected piglets. It caused mass epidemics in Europe in the 1970s and 1980s. Last spring, the United States reported its first case (see Nature 499, 388; 2013), and the virus has since spread to 23 states.

Fraudster punished Biotech investor David Blech is heading for prison after unsuccessfully appealing against a four-year sentence for fraud. Blech, who helped to set up the biopharmaceutical firm Celgene in Summit, New Jersey, pleaded guilty in May 2012 to manipulating the stock of two other companies. On 21 January, a US appeals court upheld the prison term, as well as an order for Blech to forfeit US$1.3 million. 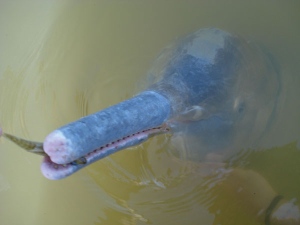 River dolphin found A new species of river dolphin, found in Brazil’s Araguaia River basin, is the first such discovery in almost 100 years, researchers reported on 22 January (T. Hrbek et al. PLoS ONE 9, e83623; 2014). The species, Inia araguaiaensis(pictured), was identified through genetic testing and probably diverged from similar South American river species more than 2 million years ago. About 1,000 individuals may live in the Araguaia River basin, the scientists estimate.

Antihydrogen made Physicists have produced a stream of antihydrogen atoms for the first time. Members of the Atomic Spectroscopy And Collisions Using Slow Antiprotons experiment at CERN, Europe’s high-energy physics laboratory near Geneva in Switzerland, reported on 21 January detecting 80 of the antiatoms 2.7 metres from their source (N. Kuroda et al. Nature Commun. 5, 3089; 2014). The researchers hope that by isolating the antiatoms from the strong magnetic fields used to create and trap the particles, they can characterize small differences between antihydrogen and hydrogen. These differences could help to explain why the Universe contains more matter than antimatter.

Who’s who More than half a million researchers have now registered for a scheme to provide authors of scientific publications with a unique identifier. The Open Research and Contributor ID (ORCID) group, a non-profit organization based in Bethesda, Maryland, announced on Twitter on 21 January that it had hit the membership milestone. Organizers of the ORCID database hope to link researchers’ identities across publications, grant applications, patents and other activities (see Nature 485, 564; 2012).

Biotech blues Biotechnology company Advanced Cell Technology (ACT) has lost its chief executive, Gary Rabin, who resigned on 22 January. The firm, based in Marlborough, Massachusetts, faces the possibility of bankruptcy after a series of financial missteps. ACT is running the only trials approved by the US Food and Drug Administration to test therapies involving embryonic stem cells. See Nature http://doi.org/q8f (2014) for more. 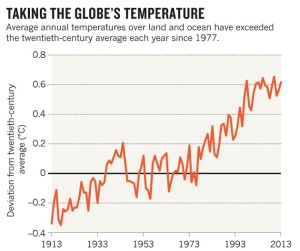 The average global temperature in 2013 was 0.62 °C above the twentieth-century average, according to an analysis released on 21 January by the US National Oceanic and Atmospheric Administration (see chart). Overall precipitation was near average, but the year was characterized by extreme drought and flooding events. Brazil, Angola and Namibia experienced their worst droughts in decades, and other African nations and Europe’s Alpine region saw intense rains and floods.

30–31 January
In Berlin, the United Nations convenes the first meeting of its newly formed Scientific Advisory Board, which consists of 26 international scientists (see page 587 and go.nature.com/4ts2qb). The group will advise the agency on sustainable development, including issues of food and water security, and climate change.