RESEARCH
Laser fusion The US National Ignition Facility (NIF) revealed last week that its 192 lasers had combined to fire a shot with an energy of 1.875 megajoules — a milestone in efforts to trigger fusion by imploding a frozen fuel pellet of hydrogen isotopes. The energy means that the facility, at the Lawrence Livermore National Laboratory in Livermore, California, has surpassed its design specifications. But the shot was just a demonstration, and did not involve a fuel target; the NIF is still racing to achieve 'ignition' (in which more energy is got out from fusion than is put in by the laser) by the end of this year. See go.nature.com/giv6ru for more.

Einstein online An online archive of Albert Einstein's personal papers and related documents is being expanded and updated, the Hebrew University of Jerusalem announced on 19 March. A limited sample of the physicist's papers is already available, but the digitization project, funded by the Polonsky Foundation UK (which helped to digitize Isaac Newton's archives), will see more than 80,000 documents put online. See go.nature.com/owyoxd for more. 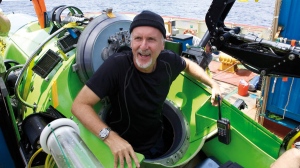 EVENTS
Back from the abyss Canadian film director James Cameron returned from his solo dive to the bottom of the 11-kilometre-deep Mariana Trench in the Pacific Ocean on 26 March, describing it as a gelatinous landscape as desolate as the Moon. Cameron (pictured, in his submersible) had hoped to collect samples of water and rock from the apparently lifeless sediment, but technical problems got in the way, so the team is hoping for three or four more dives in coming weeks. It was the first manned visit to the trench, the ocean's deepest spot, since the Trieste submersible visited the region in 1960. See go.nature.com/er8ag6 for more.

POLICY
Lessons from Potti Lapses in oversight that stopped a US university from halting clinical trials based on flawed research are symptomatic of a larger problem, according to a 23 March report by the Institute of Medicine in Washington DC. Failures in research oversight, data management and clinical-trial design permitted trials to proceed even though they were based on faulty research by cancer geneticist Anil Potti, then at Duke University in Durham, North Carolina (see Nature 469, 139–140; 2011). These problems could exist at other institutions, the report warned, calling for higher standards in other tests based on large-scale genomic and proteomic studies. See go.nature.com/hofgoc for more.

No Vatican meeting The Vatican has abruptly cancelled a controversial stem-cell conference that was to have included an audience with the Pope next month. The Third International Congress on Responsible Stem Cell Research, scheduled for 25–28 April, was set to focus on clinical applications of adult and reprogrammed stem cells, although some of the invited speakers do research using human embryonic stem cells, which the Catholic Church considers unethical. The Church's Pontifical Academy for Life, one of the conference organizers, said that the cancellation was forced by logistical, organizational and financial factors. See go.nature.com/uhapin for more.

Future Earth An alliance of researchers, United Nations bodies and global science funders are teaming up to form a ten-year research initiative that will link environmental change with understanding of its impact on human development. The initiative, called 'Future Earth — research for global sustainability', was announced on 27 March at the xPlanet Under Pressure conference in London. Officially operational from 2013, the programme will try to unite social sciences and humanities with environmental science. See go.nature.com/s14iyj for more.

Primate deaths The New Iberia Research Center near Lafayette, Louisiana, is being investigated by government regulators for an incident last year in which three decomposing macaques were found trapped in a metal chute connecting two outdoor cages. The US Department of Agriculture (USDA) probe was publicized by animal activists at a 27 March press conference. Last week, activists also publicized two other instances of primate deaths at research laboratories: a January USDA inspection report recording the second death of a primate in less than six months at drug firm Bristol-Myers Squibb (headquartered in New York City); and a February warning letter sent to Rockefeller University in New York City, after a macaque died last year when its collar became entangled with another animal's. See go.nature.com/r1xrqo for more.

Antibiotic ban The US Food and Drug Administration (FDA) might issue further restrictions on the use of antibiotics in farm animals, after a federal court in New York ordered it to take action on a 1977 finding that dosing livestock with penicillin and tetracyclines could promote the spread of drug-resistant bacteria. The FDA started proceedings to restrict the drugs but never completed them — and in December 2011 formally abandoned the process. The ruling on 22 March, after a lawsuit by a coalition of watchdog groups, means that the agency must continue where it left off.

Neutrino worry The future of a pioneering US project to study neutrinos was thrown into doubt on 19 March, when officials at the US Department of Energy (DOE) said that they were reluctant to fund it in its current form. Expected to come online in 2022–24, the Long-Baseline Neutrino Experiment would use more than 30,000 tonnes of liquid argon housed in the Homestake Mine near Lead, South Dakota, to detect neutrinos sent 1,300 kilometres from Fermilab in Batavia, Illinois. But it would cost between US$1.2 billion and $1.5 billion — eating up too much of the DOE's budget for high-energy physics. See go.nature.com/awptgm for more.

PEOPLE
Abel award Mathematician Endre Szemerédi, of the Alfréd Rényi Institute of Mathematics in Budapest, has been awarded this year's Abel Prize in mathematics, worth around US$1 million and considered to be as prestigious as the Nobel prize. Szemerédi won for his work on discrete mathematics (relating to discrete entities such as number sequences, logic operations, and networks) and theoretical computer science. See go.nature.com/evizub for more. 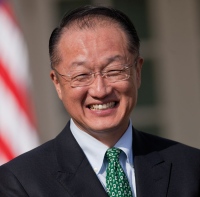 World Bank leader Jim Yong Kim, an expert in the field of global health, has been nominated by US President Barack Obama to be the next leader of the World Bank. Kim, currently president of Dartmouth College in Hanover, New Hampshire, is a physician and anthropologist who led the World Health Organization's HIV/AIDS unit during 2004–06. As the US choice, Kim (pictured) is almost assured of the post, although his 23 March nomination to replace Robert Zoellick was unexpected: it would be the first time that the World Bank was not headed by a financier, economist or politician. See go.nature.com/xnzw8c for more.

Gairdner awards Jeffrey Ravetch, from the Rockefeller University in New York City, is among seven scientists who have won this year's Canada Gairdner Awards. The prizes, each worth US$100,000, are given by the Gairdner Foundation in Toronto for leading biomedical research and often presage Nobel prizes. Ravetch won for his work on immune receptors. Other winners announced on 22 March include Michael Young (also at Rockefeller), Jeffrey Hall and Michael Rosbash (both at Brandeis University in Waltham, Massachusetts) for their work on biological clocks. See go.nature.com/z4zoe8 for more.

BUSINESS
Patent panic The US Supreme Court has ordered a New York appeals court to reconsider its ruling last year that patents on genes are valid (see Nature 476, 11; 2011). The 26 March order follows a 20 March Supreme Court ruling to overturn two patents on a way to determine drug dosage because they were based on the laws of nature — a decision that rocked the biotech industry. Those patents, owned by the biotech company Prometheus Laboratories in San Diego, California, covered the process of administering a class of drug called thiopurines and measuring blood levels of key metabolites to determine whether the dose received is safe and effective. See go.nature.com/lj9kyl for more. 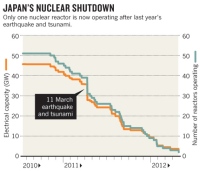 TREND WATCH
Only one nuclear reactor is currently operating in Japan (see chart), after the Tokyo Electric Power Company took a reactor at the Kashiwazaki-Kariwa power station in Niigata Prefecture offline for routine maintenance on 26 March. None of the reactors closed after an earthquake and tsunami struck the Fukushima Daiichi plant last March has yet reopened, although some have passed official 'stress tests' showing that they could withstand similar disasters.

COMING UP
31 March–4 April
The American Association for Cancer Research meets in Chicago, Illinois, with recent studies on cancer genetics to the fore.
go.nature.com/a76fdh

3–4 April
The Royal Society in London hosts a meeting to discuss flu-virus research — including concerns about biosecurity.
go.nature.com/9ngnx7