Europe budget rise The European Commission has proposed an €80-billion (US$107.5-billion) budget for Europe's next research funding programme, which runs from 2014 to 2020. That is a 60% rise on the current programme (running 2007–13), but individual sectors get larger funding boosts: the European Research Council, a grants agency for basic research, is in line for a 77% rise to €13.2 billion. Europe's research commissioner, Máire Geoghegan-Quinn, emphasized that stem-cell research would be supported, assuaging fears that it might not after Europe's Court of Justice banned patents on human embryonic stem cells in October. The proposals, released on 30 November, will now be discussed by the European parliament and by member states, with the aim of reaching an agreement by the end of 2013. See go.nature.com/hxmqua for more. 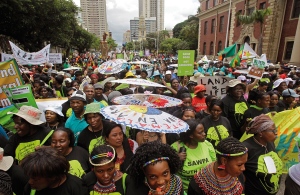 Durban debates climate treaty Delegates at the United Nations climate talks in Durban, South Africa, are asking afresh whether the world needs a new legally binding climate treaty when the Kyoto Protocol expires next year. Campaigners rallying in the city (pictured) urged a breakthrough, but none had arrived during the first week of talks. Negotiators did at least make some progress on initiatives to curb deforestation, striking a technical deal that lays out ground rules by which countries would report baselines for rates of deforestation, and would submit these to international peer review. See go.nature.com/gmzoab for the latest blogs from Durban.

UK medical boost British scientists may gain wider access to data from patients in the country's National Health Service, the government announced on 5 December. It is consulting on plans for patient data to be automatically 'opted in' to clinical research, which could include research by private companies. The consultation is part of a package of measures to boost Britain's life-sciences industry, including a fund (half of it new spending) worth £180 million (US$282 million) to speed drugs from lab to clinic. See go.nature.com/qe6wmp for more.

ITER budget saved After more than a year of deadlock, European policy-makers have agreed a deal to plug a €1.2-billion (US$1.6-billion) funding gap in the 2012–13 budget of ITER, the €15-billion experimental fusion reactor being built near Cadarache, France. The agreement redirects €840 million from other areas of European spending, and importantly avoids raiding Europe's research budget, which ministers had threatened to do. The remaining €360 million will come from as-yet-unspecified areas of Europe's 2013 budget, policy-makers agreed. See go.nature.com/qjnxy3 for more.

Plutonium to burn Hoping to get rid of its 112-tonne stockpile of plutonium, the UK government said last week that it was considering building a plant to recycle the plutonium into mixed oxide fuel (MOX). The move comes just four months after the Nuclear Decommissioning Authority announced the closure of the country's only nuclear reprocessing facility, at Sellafield (see Nature 476, 140; 2011). That plant (one of only two commercial MOX facilities in the world) has been beset with technical problems. But a new MOX reprocessing plant is not the only option: on 30 November, GE Hitachi Nuclear Energy, based in Wilmington, North Carolina, proposed building a fast reactor fuelled by plutonium. See go.nature.com/lrsqza for more.

Elements named Pencil two new names into the periodic table: elements 114 and 116 should be called flerovium (Fl) and livermorium (Lv), the International Union of Pure and Applied Chemistry (IUPAC) proposed on 1 December. The names honour the institutes that collaborated to create the artificial elements: livermorium for the Lawrence Livermore National Laboratory in California, and flerovium for Georgy Flerov, founder of the Flerov Laboratory of Nuclear Reactions at the Joint Institute for Nuclear Research in Dubna, Russia. (Dubnium is already an element.) IUPAC will allow five months for public comment, but the names are likely to be confirmed next May. See go.nature.com/2wvwkc for more.

Earth-like planet Kepler, NASA's planet-hunting space telescope, has announced its first potentially habitable planet around a star like our Sun. Kepler-22b is not an Earth twin: at 2.4 times Earth's radius, it could be more like a gassy Neptune than a rocky planet. But it sits in a comfortably warm orbit from its host star, at temperatures similar to those experienced by Earth. The planet — announced on 5 December — is 184 parsecs (600 light years) from us. Kepler's full catalogue now includes 2,326 planet candidates. See go.nature.com/xc6we6 for more.

Stapel retraction Dutch social psychologist Diederik Stapel, who admitted faking data in numerous published papers, last week retracted a 2011 study that suggested disorderly environments encourage discrimination (D. A. Stapel and S. Lindberg Science 332, 251–253; 2011). It is the first in what is likely to be dozens of retractions. Committees at the universities of Amsterdam, Groningen and Tilburg, where Stapel studied and worked between 1994 and 2011, aim to identify tainted papers for a report that will not be finished until mid-2012. See go.nature.com/8lv4n2 for more.

Warmest La Niña This year is set to be the tenth warmest since records began in 1850, the World Meteorological Organization (WMO) said on 29 November. But it will also be the hottest year to have experienced a strong La Niña event — the natural cycle in which temperature falls over vast areas of the sea surface in the equatorial east-central Pacific Ocean. The WMO used figures up to October from three data sources to make its projection.

Open science apps A website where people can upload their genetic and phenotypic information has come first in a contest to build applications to make science more open. OpenSNP (opensnp.org) won the inaugural API Binary Battle, sponsored by open-access publisher the Public Library of Science and the paper-sharing site Mendeley. See go.nature.com/wdw9gw for more. 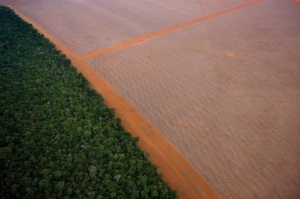 Deforestation down Deforestation in the Brazilian Amazon rainforest has fallen to a record low for the third year running, according to satellite data released on 6 December by Brazil's National Institute for Space Research (INPE) in São José dos Campos. It seems that strong government enforcement countered forest clearing after sudden spikes in deforestation (pictured) were reported from March to May. In August, the INPE had reported a 15% rise in deforestation for the year, which runs from August 2010 to July 2011. But that report was based on coarser-resolution satellite imagery. See go.nature.com/pxpkyg for more.

Arctic oil setback Cairn Energy, a company that is leading efforts to find oil and gas off the coast of Greenland, announced on 30 November that it is plugging and abandoning the final wells it drilled this year. The firm, based in Edinburgh, UK, has failed to find any commercially viable reserves after two years drilling eight offshore exploration wells at a reported cost of about US$1 billion. Market analysts speculated that the company might give up drilling in 2012, although other companies, including Shell, Exxon, Chevron and Statoil, hold licences to explore off Greenland.

Meltdown admitted The operators of Japan's stricken Fukushima Daiichi nuclear plant have made their direst assessment yet of the meltdown that took place in March. In the most damaged reactor, Unit 1, all the fuel melted through the steel pressure vessel and seeped into (but not through) the concrete base of the containment vessel below, the Tokyo Electric Power Company (TEPCO) admitted on 30 November. TEPCO had previously said that only some of the fuel had melted, but its latest simulations fall into line with models run by observers such as the US Nuclear Regulatory Commission. Leaks of radioactive water continue at the site: on 4 December, TEPCO said that it was using sandbags to contain a new leak from a building in which water was being decontaminated. 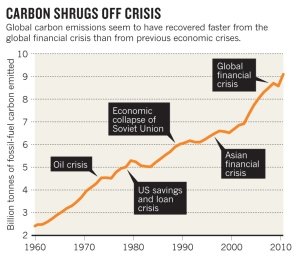 The sharp rise of carbon emissions from 2009 to 2010 — by nearly 6% — suggests that the global financial crisis has had little impact in slowing down the world's output of greenhouse gases, according to an analysis published on 4 December (G. P. Peters et al. Nature Climate Change http://doi.org/g2m; 2011). The rise was mainly due to high emissions growth in a few key economies. China's emissions were up by 10.4%, India's by 9.4% and Brazil's by 11.6%. See go.nature.com/bvlgbj for more.

International climate negotiations in Durban, South Africa, conclude. See go.nature.com/dw9pu2 for the latest from the meeting.

Latest results from the Large Hadron Collider will be revealed at a CERN public seminar in Geneva, Switzerland. See go.nature.com/lyy96r for rumours before the event.
go.nature.com/rqgjuc