Carbon tax dropped The Australian Senate last week voted 39 to 32 to scrap the country’s pioneering carbon-pricing scheme, established just two years ago with the goal of slashing greenhouse-gas emissions. The scheme, second only to the European Union’s cap-and-trade scheme in terms of the quantity of emissions it aimed to control, will be replaced with an incentive-based system to encourage farmers and companies to reduce emissions and restore soil carbon. Experts fear that this approach will be less efficient than a market-based mechanism. See pages 383 and 392 for more.

CDC reforms The US Centers for Disease Control and Prevention is taking steps to create a “culture of lab safety” in response to incidents this year in which H5N1 influenza and anthrax were mishandled, director Thomas Frieden told the US Congress’s oversight and investigations subcommittee on 16 July. Frieden said that he plans a broad assessment of the agency’s inventory of dangerous agents, to review its training procedures, and to bring in an outside panel to advise on safety. See go.nature.com/bdhkxe for more.

Stem-cell patents The European Court of Justice seems set to allow patents on some technologies that create stem cells from human eggs. Almost three years ago, it declared that any patent that relied even indirectly on human embryonic stem-cell lines should not be granted on grounds of immorality (see Nature 480, 310–312; 2011). But on 17 July, Pedro Cruz Villalón, the court’s advocate general (whose opinions are usually accepted), said that two patent applications based on creating pluripotent stem cells from non-fertilized human eggs should be allowed because the cells are intrinsically unable to develop into humans. The court’s final ruling is expected in a few months. 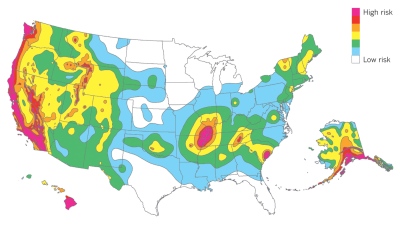 Fresh look at US earthquake risk Seismic-hazard maps for the United States released on 17 July suggest that some regions are at greater risk of earthquake damage than they were in 2008. The US Geological Survey has produced an update that takes into account the latest methods, models and data. A magnitude-5.8 earthquake in Virginia in 2011 has shown that the eastern United States has increased potential for large, damaging earthquakes. And New York City is slightly less likely than before to be hit by slow shaking, the type of shaking that damages tall buildings.

Microsoft search Microsoft announced last week that it is to revamp its free scholarly search engine, Microsoft Academic Search. The company plans to stop running the service as a stand-alone product, instead ensuring that information about scholarly works and academics appears through its general search engine, Bing. Microsoft Academic Search once competed with Google Scholar, but failed to stay up to date (see go.nature.com/ti3t9x). Microsoft says that researchers will be able to control what information about themselves others can access through Bing.

Water savings Developing nations could save a significant amount of water by adopting modern farming techniques and technologies, says a study published on 15 July by the United Nations Environment Programme. The study estimates that the Indian state of Punjab could reduce annual agricultural water use by up to 23 billion cubic metres by changing crop patterns and using water-saving technologies. The state could replace rice with a mixture of crops, including pulses, maize (corn), cotton, fruit, vegetables and sugar cane. It could also sow rice rather than plant seedlings.

Burnout journal The publisher Elsevier launched an open-access research journal focused on stress-related workplace fatigue on 15 July. An editorial in the first issue of Burnout Research states that burnout is a “longstanding issue of social concern” that affects both job performance and quality of life. The editors say that 1,000 articles are published on burnout every year, scattered across 100 journals; they hope that their journal will help to bring coherence to the field.

HIV experts killed Leading HIV researcher Joep Lange and five other delegates to a major AIDS meeting are among the 298 people who died on board the Malaysia Airlines flight MH17, which crashed on 17 July. They were on their way to the 20th International AIDS Conference being held on 20–25 July in Melbourne, Australia. The plane was flying from Amsterdam to Kuala Lumpur when it was shot down by a surface-to-air missile over eastern Ukraine, killing all on board. See page 391 for more. 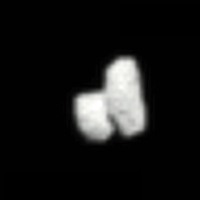 Binary comet The comet-chasing spacecraft Rosetta has taken images revealing its target’s surprising shape. Pictures published on 17 July show that 67P/Churyumov-Gerasimenko consists of two distinct parts (pictured), known as a contact binary, and may have formed when separate comets collided at low speed or a single comet was pulled apart or eroded. The European Space Agency probe is scheduled to rendezvous with its target on 6 August, then study it in detail before setting down a lander in November. That may be made more difficult by the comet’s irregular shape. See go.nature.com/a1xghw for more.

Chikungunya cases Florida’s health department announced the first locally acquired cases of the mosquito-borne chikungunya virus in the United States on 17 July. The two cases confirm that the virus has infected US mosquitoes; previous US cases were acquired abroad. First identified in East Africa in 1952, it appeared in the Western Hemisphere on the island of St Martin in December 2013 and quickly spread to 22 other nations in the Americas. It causes rashes and joint pain that can persist for years. See go.nature.com/5bv5el for more.

Pathogens found The US Food and Drug Administration revealed on 16 July that forgotten vials of smallpox found this month at the campus of the National Institutes of Health in Bethesda, Maryland, were not alone. A total of 12 boxes and 327 vials, believed to be more than 50 years old, also included vials labelled as dengue, influenza, Q fever and rickettsia. There is no evidence that anyone was exposed to any of the pathogens, the agency adds.

Darwin library Science historian John van Wyhe of the National University of Singapore has released a virtual version of Charles Darwin’s library from the naturalist’s famous 1830s journey around the world on HMS Beagle. For the first time, all of the printed sources that Darwin referenced during the voyage are available online. The library, part of a broader project called Darwin Online, comprises 404 volumes, totalling more than 195,000 pages. See go.nature.com/znwlnn for more.

Obokata PhD probe Haruko Obokata, the author of two stem-cell papers that were retracted from Nature after she was found guilty of scientific misconduct, should not lose her PhD, an investigative panel ruled last week. The independent investigation initiated by Waseda University in Tokyo, which awarded Obokata’s PhD in 2011, found six instances of misconduct in her thesis. On 17 July, the panel said in a report that the problems were either unintentional or were not significant enough to influence the acceptance of her thesis. The university is now considering how to take the recommendations forward.

Quake alert system A US congressional appropriations committee approved US$5 million on 15 July to develop an earthquake early-warning system for the US West Coast. It will monitor geological threats such as the San Andreas and Cascadia fault zones in California, Oregon and Washington. The system would alert locations such as hospitals and transportation centres that an earthquake has begun, providing crucial seconds of warning before ground-shaking starts. The bill must still be approved by both houses of Congress. Other countries, including Japan and Mexico, already have such warning systems.

Broad donation The Broad Institute in Cambridge, Massachusetts, has been given what it describes as the largest-ever donation for psychiatric research. On 22 July, the institute announced that philanthropist Ted Stanley will donate US$650 million to its Stanley Center for Psychiatric Research, established in 2007. See page 393 for more.

Private spaceflight The United Kingdom has identified eight coastal airfields as candidate sites for a commercial spaceport planned to open in 2018, the government announced on 15 July. Six of the sites are in Scotland; England and Wales each have one. The previous week, the US Federal Aviation Authority granted approval for the private launch firm SpaceX of Hawthorne, California, to construct a spaceport in southern Texas. 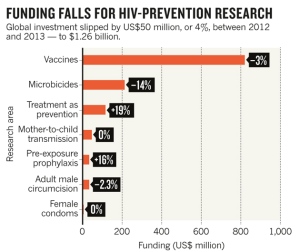 Funding for HIV-prevention research has fallen for the first time in six years, according to the HIV Vaccines and Microbicides Resource Tracking Working Group. Vaccine research remains the major focus. Support has grown for research into pre-exposure prophylaxis (treating people at risk) and treatment of infected people to prevent transmission, but fallen for that into topical microbicides. Work on adult male circumcision also received less funding (partly because it is a proven strategy).