Quake trial appeal On 18 October, an Italian court heard opening arguments from defence attorneys appealing against the conviction of six scientists and a government official found guilty of manslaughter over the earthquake that hit L’Aquila, Italy, on 6 April 2009. On 31 March 2009, the scientists had been part of an expert panel on seismic risk that prosecutors say resulted in a reassuring message being released to the public. According to the charges, that message led to the death of L’Aquila residents who stayed in their homes when they would otherwise have left. See go.nature.com/xf4smu for more.

Ebola update A US$1-billion appeal by the United Nations to help fight Ebola in West Africa has yielded only about $376 million in pledges, the organization said on 16 October. Last week, the World Health Organization (WHO) estimated that mortality rates had neared 70%, and warned that Liberia, Sierra Leone and Guinea could see up to 10,000 new cases per week by December. The WHO also declared Nigeria and Senegal free of Ebola after 42 days had passed since their last reported case. In the United States, President Barack Obama on 17 October appointed former White House adviser Ron Klain to oversee the country’s response to Ebola. 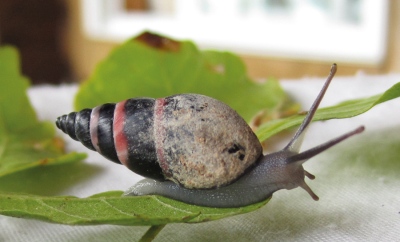 Snail find ruffles feathers The rediscovery of a colourful snail (pictured), declared extinct in 2007, on Aldabra atoll in the Seychelles Islands has revived tensions over the study published in Biology Letters that reported the animal’s disappearance (J. Gerlach Biol. Lett. 3, 581–585; 2007). At the time, biologist Clive Hambler of the University of Oxford, UK, and his colleagues penned a comment that criticized the study’s methods, contested the claims of extinction and requested a retraction. But the comment was rejected for publication by the journal, and the Intergovernmental Panel on Climate Change has since cited the snail as a prime example of species loss caused by climate change. Conservation workers, however, rediscovered the Aldabra banded snails (Rhachistia aldabrae) in a remote part of the atoll in August 2014. On 15 October, editor-in-chief Richard Battarbee said in an editorial that the journal had invited Hambler to resubmit his comment, but that the invitation had been declined.

Beyond Pluto Planetary researchers have identified three possible targets for NASA’s New Horizons spacecraft after it flies past Pluto next year. Mission scientists used the Hubble Space Telescope to search the Kuiper belt in the distant reaches of the Solar System for objects that the probe could reach with its limited amount of fuel. Of the three, the best candidate, dubbed PT1, is several tens of kilometres across. If NASA approves funding for the visit, New Horizons would fly by PT1 in late 2018 or early 2019.

Plea offer Prosecutors have offered a plea deal to Dong Pyou Han that could resolve his fraud case without a trial. The former Iowa State University scientist is accused of misconduct in an AIDS-vaccine study. In court documents filed on 16 October, Han’s defence team asked for more time to consider the terms, which must be translated into Korean, and requested postponement of the trial, set for 3 November. In December 2013, the US Office of Research Integrity reported finding that Han spiked rabbit blood samples with antibodies to produce false results that were widely disseminated.

Costly case The University of California, Los Angeles, spent almost US$4.5 million on defending chemist Patrick Harran against criminal charges stemming from a research assistant’s death in a 2008 fire in his lab, according to documents revealed by the Los Angeles Times on 16 October. The publicly funded university, which has since spent more than $20 million on improving lab safety, says that taking on the legal expenses was within its rights and obligations. In June, Harran agreed to a deal that could result in charges being dismissed (see go.nature.com/vpdwvz). 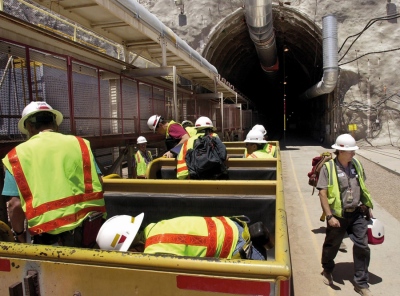 Nuclear waste site In a long-delayed safety evaluation, the US Nuclear Regulatory Commission said on 16 October that designs for a proposed national nuclear-waste disposal site at Yucca Mountain in Nevada (pictured) contained the necessary barriers for long-term isolation of radioactive waste. Congress designated the site as a potential repository in 1987, and in 2008 the Department of Energy applied for a construction licence. But the project has been stalled for years by political opposition and legal challenges (see Nature 473, 266–267; 2011). Last week’s report spurred renewed calls by Republicans to revive the project.

Pathogen pause The US White House Office of Science and Technology Policy on 17 October announced a mandatory moratorium on new funding for gain-of-function research, which increases the deadliness of pathogens such as the virus that causes influenza. The moratorium suspends government funding for such work, and asks scientists who have already been funded to pause their research voluntarily while two non-regulatory bodies — the National Science Advisory Board for Biosecurity (NSABB) and the National Research Council — assess the risks. See pages 403 and 411 for more.

Australian edge The Australian government unveiled a national strategy on 14 October for strengthening ties between industry and science, and increasing commercial returns on public research funding. The ‘competitiveness agenda’ established the Commonwealth Science Council, a group of ten appointed experts from business and research, which will become the leading body for advising the government on science and technology. Five centres will be set up, at a projected cost of Aus$188.5 million (US$165 million), to improve public–private science collaborations, and to boost Australia’s mining, oil and medical technologies industries. See go.nature.com/ydbkdd for more.

Fusion dreams Defence contractor Lockheed Martin announced ambitious plans for nuclear fusion on 15 October, with a ten-year road map to commercialize a reactor small enough to fit on a lorry. Lockheed’s Skunk Works division in Palmdale, California, has so far been tight-lipped about the results of its years of research, and several outside experts have responded to the company’s lofty goals with scepticism. See go.nature.com/u597zk for more.

Buyout backdown The biopharmaceutical company AbbVie seems to be backing away from a US$54-billion bid to take over Shire, a drug manufacturer based in Dublin. On 15 October, AbbVie’s board of directors recommended that stockholders in the firm, based in North Chicago, Illinois, reject the deal in the event of a vote. The company cited recent changes to US tax rules that eliminated some of the anticipated financial benefits of the transaction. If the deal does not go through by 14 December, AbbVie will pay Shire a $1.6-billion break fee.

Genomics boost Genetic-analysis company Illumina announced on 15 October the selection of three start-up firms to help to develop biotechnology applications for next-generation sequencing. Encoded Genomics, EpiBiome and Xcell Biosciences are the first participants in the Illumina Accelerator programme, which will give each company a US$100,000 loan; lab and office space in San Francisco, California; and extra support for experiments and reagents. See go.nature.com/tynw7o for more.

Desertec dries up Following the withdrawal of most of its shareholders, the Desertec Industrial Initiative (Dii) has buried ambitious plans to supply Europe with power from solar plants and other renewable sources across North Africa and the Middle East. Only three of its existing 19 shareholders remained after a meeting last week in Rome. Saudi Arabia’s ACWA Power, Germany’s RWE and the State Grid Corporation of China plan to remodel Dii into a service company for facilitating regional renewable-energy projects in North Africa and the Middle East. 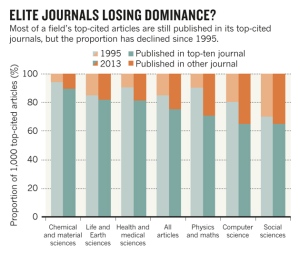 An analysis by Google suggests that, compared with 1995, a greater proportion of the 1,000 top-cited papers now appear in publications other than the ten top-cited journals (A. Acharya et al. Preprint at http://arxiv.org/abs/1410.2217; 2014). Phil Davis, a publishing consultant in Ithaca, New York, says that the trend could be partly due to an ever-increasing number of articles being published coupled with a decline in the number of articles being published in elite journals (see go.nature.com/qbztbe).

27–31 October
The Intergovernmental Panel on Climate Change meets in Copenhagen to adopt a report that synthesizes findings of its Fifth Assessment Report, and to approve the report’s summary for policy-makers.