Statin claims Statements reporting that cholesterol-lowering statin drugs have adverse side effects are being withdrawn from two articles published in the British Medical Journal. The move was announced by Fiona Godlee, the journal’s editor-in-chief, in its 17 May issue. The conclusion that around one-fifth (18–20%) of patients on statins experienced side effects was based on a “misreading” of data from a separate observational study, Godlee writes. The journal is considering whether to retract the articles fully. See go.nature.com/abswnp for more.

Brain ethics Neuroscientists must give greater consideration to ethical issues when designing experiments, says a 12 May report from a panel tasked with advising US President Barack Obama on bioethical issues. The report is the first of two to come from the Presidential Commission for the Study of Bioethical Issues in preparation for the Brain Research through Advancing Innovative Neurotechnologies (BRAIN) initiative — a White House-backed project that aims to map every neuron in the human brain. The report says that scientists should consider issues such as uncovering signs of disease when scanning individual people’s brains and the implications of performing neurosurgery for mental disorders.

Threats to US bees Last winter, 23.2% of honeybee colonies in the United States perished, the US Department of Agriculture announced on 15 May. The 2013–14 death rate is lower than in previous years but is still above the level that farmers consider sustainable. Threats such as disease, insecticide exposure and changes in farming practices are thought to be contributing to declining bee populations in many parts of the world. See go.nature.com/xtxbt5 for more. 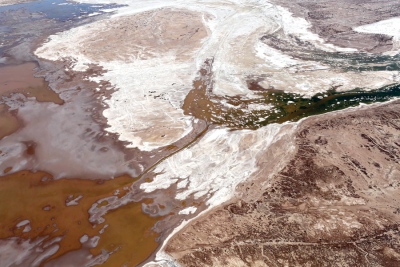 Colorado River reaches the sea On 15 May, the Colorado River flowed all the way to the Gulf of California for the first time in 20 years. Around 130 million cubic metres of water were released from a dam on the US–Mexican border on 23 March, as part of a bold ecological experiment to quench the parched bed of the once-mighty river (see Nature 507, 286–287; 2014). The water rushed through ecological restoration sites, where researchers had uprooted invasive vegetation, allowing native species such as cottonwoods and willows to germinate. The experiment is part of a 2012 water-sharing agreement between the United States and Mexico.

Swift slime The single-celled winners of an unusual competition to crown the world’s fastest slime mould were announced on 19 May. The Dicty World Race, held in Boston, Massachusetts, pitted strains of the slime mould Dictyostelium discoideum in a microfabricated racetrack 800 micrometres long. The champion was submitted by a team from the University of Groningen in the Netherlands, and was engineered to be particularly sensitive to a signalling molecule called cyclic AMP, which was used as a chemical attractant in the race. See go.nature.com/6ezbrd for more.

Satellite regulation  The US government has relaxed restrictions on the export of satellites and their component parts to other countries. The long-awaited move, announced on 13 May, shifts most commercial, scientific and civilian satellites from a munitions list tightly regulated by the Department of State into the hands of the Department of Commerce. University space scientists will now find it easier to collaborate with international partners. But nearly all commercial crewed spacecraft remain under the control of the old munitions regulations.

University ranking A European consortium launched a new way to rate universities on 13 May. Known as U-Multirank, the system is a searchable database of the performance of universities from around the world. Institutions are assessed on a wide range of indicators, such as regional research collaboration and support for students studying abroad. The system allows people to look at the performance profile of an institution; compare one university with another; and search for universities that perform well in particular areas. It differs from existing rankings, which tend to rate universities in a single league table, and rely mainly on research performance.

China open access The Chinese Academy of Sciences and the National Natural Science Foundation of China both announced new open-access policies on 16 May. All researchers and graduate students who are supported by the agencies are now required to make their publicly funded studies free to read. Research papers must be made accessible in online repositories no later than a year after their publication in an academic journal. See go.nature.com/ojrmfy for more. 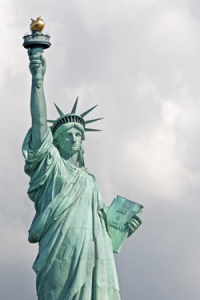 US sites at risk  Historic US landmarks are at risk of damage and destruction caused by sea-level rise, flooding and wildfires, warns the Union of Concerned Scientists in a report released on 20 May. The advocacy group, based in Cambridge, Massachusetts, says that protecting these sites should be part of a national climate-change strategy. Among the top 30 at-risk sites are Jamestown in Virginia, the Statue of Liberty (pictured) and Ellis Island in New York, and coastal NASA facilities.

Space ties cut Russia is severing its space-science partnership with the United States, according to a statement given by Russian deputy prime minister Dmitry Rogozin on 13 May. The move is in retaliation against US-imposed sanctions linked to Russia’s actions in Ukraine. Rogozin said that Russia will end its long-running collaboration with the United States on the International Space Station in 2020. NASA, which depends on Russian carriers to ferry astronauts to and from the space station, says that it has not been officially notified about the move. See go.nature.com/6shdlx for more.

HAARP to close The US government’s High Frequency Active Auroral Research Program (HAARP) — a leading ionospheric research facility near Gakona, Alaska — is facing closure. The US$250-million facility is used mainly by the Defense Advanced Research Projects Agency (DARPA) but on 14 May, the agency said that it would be ending its experiments there. The US Air Force, which manages HAARP, says that the programme will shut once DARPA concludes its work. See go.nature.com/wv69qs for more.

Australian budget The Australian government has allocated Aus$20 billion (US$18.7 billion) to a establish a Medical Research Future Fund to tackle diseases including diabetes and cancer, it announced on 13 May. But its budget also included cuts to the nation’s science agency — the Commonwealth Scientific and Industrial Research Organisation — and the abolition of its renewable-energy agency. See go.nature.com/jhkcvk for more.

Deal spurned The London-based drug company AstraZeneca has rejected another buyout offer from its New York rival Pfizer. On 18 May, Pfizer said that it had offered AstraZeneca around £55 (US$93) per share — valuing the British company at roughly £69 billion. Pfizer said that this was its final offer and it would not attempt a hostile takeover. But it urged AstraZeneca’s shareholders to encourage their company’s board to sell. 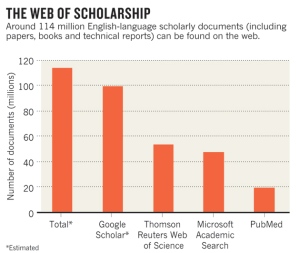 The academic search engine Google Scholar can find about 88% of all English-language scholarly documents on the World Wide Web, according to an estimate by computer scientists Lee Giles and Madian Khabsa at Pennsylvania State University in University Park (M. Khabsa and C. L. Giles PLoS ONE 9, e93949; 2014). The duo studied the coverage of Google Scholar and a competitor, Microsoft Academic Search. At least 24% of documents are freely available, they add. See go.nature.com/matsio for more.

25–30 May
The World Organization for Animal Health holds its general assembly in Paris. On the agenda are standards for world trade in animals and their products, and animal diseases.
go.nature.com/dgum4u

25–30 May
The quadrennial assembly of the Global Environment Facility will discuss expanding financing to support food security and sustainable cities.
go.nature.com/bodsub

26–28 May
Worldwide heads of research councils will discuss open access and how to support young researchers at the annual meeting of the Global Research Council in Beijing.
go.nature.com/ofcfna