Petaflop power Two US laboratories have ordered IBM supercomputers that will become the nation’s fastest when they come online in 2017. The machines together cost US$325 million and will run at up to 150 petaflops (150 × 1015 ‘floating-point’ operations per second), more than five times faster than the Titan system at the Oak Ridge National Laboratory in Tennessee. Oak Ridge will get one of the computers; the other will be at the Lawrence Livermore National Laboratory in California. China’s National Supercomputer Center in Guangzhou has the world’s leading system, Tianhe-2, at 55 petaflops. See page 324 for more.

US nuclear woes The US military may need to spend billions of extra dollars on its nuclear-weapons programme after two review panels found that it is plagued with low morale, ineffective oversight and ageing infrastructure. In one case, three US bases housing 450 nuclear weapons were forced to share the only wrench capable of attaching warheads to missiles, sending the tool to each other using the courier FedEx. US defence secretary Chuck Hagel said on 14 November that spending needs to increase by around 10% over the next half-decade. The defence department’s 2014 budget for nuclear forces is around US$15 billion.

Green climate fund The Green Climate Fund, an international agreement for channelling money to developing countries to help them adapt to climate change, received a landmark boost from leaders at the G20 Summit last week in Brisbane, Australia. US President Barack Obama and Japanese Prime Minister Shinzo Abe pledged to contribute US$3 billion and $1.5 billion, respectively, to the fund, which is holding a pledging conference on 19–20 November in Berlin. Established in 2010, the fund has now received pledges from 13 nations, totalling $7.5 billion. 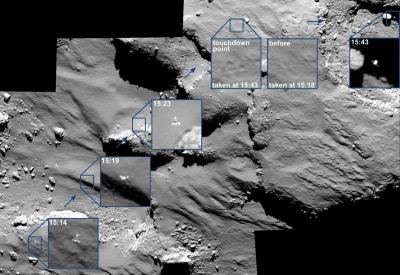 Bouncing on a comet This image, taken from the European Space Agency’s Rosetta spacecraft, captures the Philae lander as it drifted down onto comet 67P/Churyumov–Gerasimenko on 12 November — rebounding as high as 1 kilometre after its first touchdown. After a second bounce, the lander came to rest in the shadow of a cliff, from where it took data for three days before its batteries ran out of power. Philae may wake again if sufficient sunlight falls on its solar panels as the comet moves closer to the Sun. See page 319 for more.

Data breach Hackers have compromised four websites run by the US National Oceanic and Atmospheric Administration (NOAA) in recent weeks. The agency confirmed the breaches last week, but would not publicly discuss the suspected origin of the attacks or which data had been affected. US congressman Frank Wolf (Republican, Virginia) said that the agency told him that the Internet attacks came from China. NOAA reported that all services had been fully restored, and that delivery of weather forecasts to the public was not interrupted.

Climate deal China and the United States announced plans to substantially reduce their greenhouse-gas emissions at a summit in Beijing on 12 November. US President Barack Obama pledged to cut emissions to 26–28% below 2005 levels by 2025; Chinese President Xi Jinping said that his country will stop its emissions from growing by 2030. The joint announcement is expected to facilitate discussions of a global climate agreement — a successor to the 1997 Kyoto Protocol — to be finalized in December 2015 at United Nations climate talks in Paris. See Nature http://doi.org/w5f (2014) for more.

No science advice The European Commission has abolished the post of chief scientific adviser three years after creating it. The mandate of the outgoing adviser, UK biologist Anne Glover, ended last month together with the previous commission’s term. The new commission has decided to abolish the post, Glover told colleagues by e-mail on 12 November. Incoming commission president Jean-Claude Juncker has said that he values scientific advice, but has yet to decide what form it should take. See go.nature.com/bvfkmv for more.

Misused money Sandia National Laboratories in Albuquerque, New Mexico, wrongly used public money to lobby the US government to continue a contract with the defence research firm Lockheed Martin, according to the energy department’s Office of Inspector General. The office’s report, released on 12 November, found that the laboratory used taxpayer funds to convince federal officials and the US Congress to extend a contract under which a Lockheed Martin subsidiary manages the lab on behalf of the government for around $2.4 billion per year. The firm was non-competitively awarded a two-year extension in March 2014.

Biodiversity boost The world’s best-managed conservation sites have been recognized in a Green List, unveiled on 14 November at the World Parks Congress in Sydney, Australia. The 23 protected areas on the list, which offer the most favourable conditions for flora and fauna, include the Galeras wildlife sanctuary in Colombia and the area around Mount Huangshan in China. The sites were picked by the International Union for Conservation of Nature, based in Gland, Switzerland, which has for 50 years maintained a Red List of threatened species. The latest edition of that list was also published at the Sydney congress. See page 322 for more.

Pharma takeover Drug firm Actavis said that it would become one of the world’s leading pharmaceutical companies with a US$66-billion cash-and-share takeover of health-care firm Allergan. Actavis, which is headquartered in Dublin, said that the deal, announced on 17 November, would create a firm with revenues of more than $23 billion next year — on a par with 2013’s tenth largest pharmaceutical firm, Eli Lilly of Indianopolis, Indiana. Allergan, in Irvine, California, is a leading manufacturer of breast implants and anti-wrinkle toxin Botox; it had been fighting off a takeover bid by Canadian firm Valeant Pharmaceuticals. 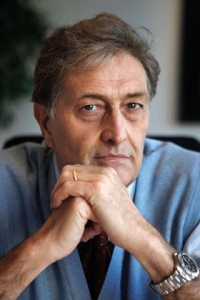 EU agency headless The London-based European Medicines Agency no longer has an executive director, after a tribunal overturned the appointment of Guido Rasi (pictured). Rasi has led the drug-evaluation agency since late 2011, but shortly after he was appointed, Emil Hristov, a former head of Bulgaria’s drug agency, appealed against the decision after not being shortlisted for the job. The agency says that the ruling is about “a procedural formality” and is taking legal advice.

Caltech lawsuit Physicist Sandra Troian is suing the California Institute of Technology (Caltech) in Pasadena, where she is a faculty member, alleging that the university retaliated against her for reporting suspicions about possible espionage by a postdoctoral scholar from Israel. The 13 November lawsuit claims that the university impeded her career by falsely accusing her of research misconduct relating to authorship attribution, and by denying her grant funding, among other things. Caltech calls the lawsuit “meritless”.

PubPeer brawl PubPeer, a website for discussing science articles, will contest legal action brought by a scientist who claims that anonymous comments about his work made on the site are defamatory, it said last week. Fazlul Sarkar, a cancer researcher at Wayne State University in Detroit, Michigan, had accepted a tenured post at the University of Mississippi in Oxford, but the university withdrew its offer after it saw the comments. He filed a lawsuit against the unknown commenters on 9 October, and subpoenaed PubPeer to reveal information about their identities. But the website’s lawyers told Nature that its owners will fight the subpoena by arguing that the comments were not defamatory. See Nature http://doi.org/w68 (2014) for more. 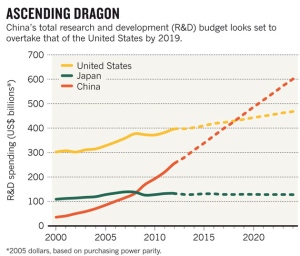 If current trends continue, China will overtake the United States in research and development (R&D) spending by the end of the decade, according to a 12 November biennial report from the Organisation for Economic Co-operation and Development (OECD). But China spends much of its R&D budget on building infrastructure, so less money goes into research than in other countries, says the OECD’s Dominique Guellec. See Nature http://doi.org/w5r (2014) for more.

24 November
The deadline set by international negotiators in Vienna to agree a deal with Iran on curbing its nuclear programme. A temporary pact was agreed a year ago (see Nature 503, 442–443; 2013).