Space commerce The Dragon spacecraft carried 400 kilograms of cargo to the International Space Station on 10 October — marking the first journey in a 12-flight, US$1.6-billion contract between NASA and commercial firm SpaceX, in Hawthorne, California. Another company, Orbital Sciences of Dulles, Virginia, will also attempt commercial resupply of the station; it is set to test-fly its Antares rocket and Cygnus capsule later this year. 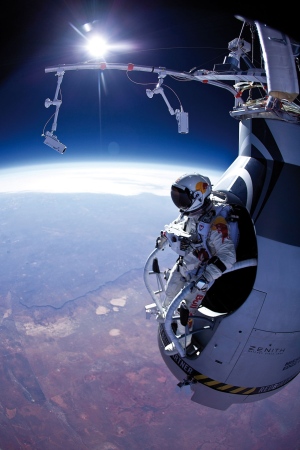 Supersonic skydive Austrian Felix Baumgartner set a new freefall record on 14 October, jumping from more than 39,000 metres above New Mexico and breaking the speed of sound on the way. Data from the jump will aid the design of high-altitude parachutes and inform future plans for the emergency evacuation of spacecraft, according to Red Bull Stratos, the team behind the jump. The previous record of 31,000 metres was set in 1960 by Joe Kittinger, a former US Air Force pilot.

ORCID launch A registry that will grant scientists a unique identifying number — helping readers of the literature to distinguish between authors with similar names — launched on 16 October. ORCID, the Open Researcher and Contributor ID, is supported by funds and input from member institutions, publishers (including Nature Publishing Group) and scientific societies. It should integrate with existing researcher identification systems and make it easier for universities and funding agencies to track scientists’ output (see Nature 485, 564; 2012). Researchers can register at www.orcid.org and add information about their publications to their ORCID records.

African genetics Nine research projects led by African scientists have won the first grants awarded as part of a consortium to study the genetic and environmental underpinnings of diseases common on the continent. The five-year, US$38-million programme, called Human Heredity and Health in Africa, is funded jointly by the US National Institutes of Health and Britain’s Wellcome Trust. Funded projects represent 22 countries and include an African bioinformatics network, two biorepositories and studies into the genomics of both infectious and non-communicable diseases.

Alzheimer’s trials An Alzheimer’s disease prevention trial has picked three experimental drugs that it will test from 2013. The Dominantly Inherited Alzheimer’s Network Therapeutic Trials Unit at Washington University School of Medicine in St Louis, Missouri, said on 10 October that it would test drugs from Roche and Eli Lilly in people with rare mutations that can go on to cause Alzheimer’s. One of the drugs, solanezumab, failed clinical trials in August (see Nature 489, 13–14; 2012). But independent sub-analyses, released on 8 October at a meeting of the American Neurological Association in Boston, Massachusetts, suggested that the drug did slow cognitive decline in some people with mild forms of Alzheimer’s.

Better biomarkers The US National Cancer Institute has released draft guidelines meant to prevent the sloppy use of biomarkers in clinical trials. Chief among the new rules are precautions against imposing signals on noise, as biologists comb through massive data sets to find markers that may be linked to disease. Patterns found in large-scale genomic or proteomic data must be re-evaluated using an independent data set, noted the guidelines, published on 11 October. The move comes after clinical trials in cancer were halted for problems including erroneous data (see Nature 469, 139–140; 2011). See go.nature.com/zzuqdg for more.

Genome privacy Researchers and funding bodies should protect people’s privacy even as they hope to use data from genome sequencing to improve medical treatments, a US government ethics panel said on 11 October. The report from the Presidential Commission for the Study of Bioethical Issues called for consistent policies to protect individuals’ data, including making it illegal to sequence people without their knowledge or consent. See go.nature.com/1g744j for more.

Texas tribulations All the members of the scientific review council of the Cancer Prevention and Research Institute of Texas, including chairman and Nobel-prizewinning biologist Phil Sharp, tendered their resignations last week after expressing concerns that peer review was bypassed in the award of a US$18-million “commercialization” grant while the award of scientific grants that won approval from reviewers was delayed. See go.nature.com/rxa4y1 for more.

Nuclear failings Nineteen months after nuclear reactors melted down at its Fukushima Daiichi plant, the Tokyo Power and Electric Corporation (TEPCO) has admitted that it could have introduced better safeguards against disasters such as tsunamis. The Japanese nuclear operator said that it had shrunk from acknowledging risks and taking safety measures for fear of alarming the public and fostering opposition to nuclear plants. Its admission came in a 12 October report, released to coincide with the first meeting of an external committee tasked with improving nuclear safety at TEPCO.

Stem-cell lawsuit Two scientists who work on adult stem cells asked the US Supreme Court on 10 October to decide whether it is legal for the National Institutes of Health to fund human embryonic stem-cell research. James Sherley of the Boston Biomedical Research Institute in Watertown, Massachusetts, and Theresa Deisher, chief executive of AVM Biotechnology in Seattle, Washington, first sued the US government to stop the funding in 2009, although their case was thrown out by a US appeals court in August (see Nature 488, 562; 2012).

eLife comes online  The open-access publication eLife (www.elifesciences.org), which hopes to become a top-tier biomedical and life-sciences journal, published its first four research articles on 15 October. The online journal, funded by the Howard Hughes Medical Institute in Chevy Chase, Maryland, the Wellcome Trust in London and the Max Planck Society in Munich, Germany, currently charges no author fees for publishing. It has hired working scientists as editors, and selects or rejects articles on the basis of their potential influence as well as their technical rigour. 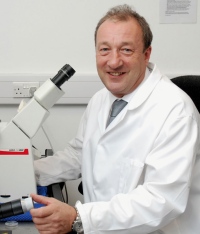 Dolly cloner dies Keith Campbell (pictured), the reproductive biologist who helped to clone Dolly the sheep from a mammary-gland cell in 1996, died aged 58 on 5 October. The news was confirmed on 11 October by the University of Nottingham, UK, where he worked. In 2008, Campbell shared the Shaw Prize in Life Science and Medicine for his work on cell differentiation, and the promise it holds for the treatment of disease, with cell biologists Ian Wilmut and Shinya Yamanaka — who won this year’s medicine Nobel.

Plagiarism charge Accusations of plagiarism levelled at Annette Schavan, Germany’s research minister, are supported by a report leaked to the press on 12 October. The report, commissioned by the University of Düsseldorf, which awarded her PhD, says that Schavan paraphrased the work of others in her 1980 PhD thesis on education without appropriate citation, intending to pass the work off as her own. She denies the charges. See go.nature.com/qrujdi for more.

Chemistry Nobel This year’s Nobel Prize in Chemistry was won by Robert Lefkowitz of Duke University Medical Center in Durham, North Carolina, and Brian Kobilka at Stanford University School of Medicine in California, for their work on G-protein-coupled receptors, key proteins in cell signalling. See page 320 for more.

Hepatitis success A hepatitis C treatment cured nearly all viral infections in a phase IIb clinical trial of 571 patients, said drug-manufacturer Abbott Laboratories of Abbott Park, Illinois, on 15 October. The cocktail of three experimental drugs and approved antiviral ribivarin cured 99% of patients who had not previously been treated and 93% of those who had failed conventional therapies. Abbott plans a larger, phase III trial before seeking regulatory approval to enter an increasingly competitive hepatitis C market worth billions of dollars.

Trial-data promise GlaxoSmithKline said on 11 October that it would make all of its raw clinical-trial data available to researchers, making the London-based firm the first major pharmaceutical company to do so. See page 322 for more. 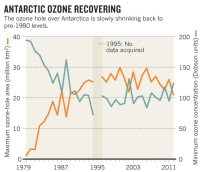 The springtime destruction of ozone over Antarctica reached its annual maximum in early October, with the ozone hole slightly less wide, and its minimum ozone concentration slightly higher, than in previous seasons (see chart). The Montreal Protocol, signed 25 years ago, seems to have led to decreasing atmospheric levels of the chlorine and bromine chemicals that destroy ozone. But NASA’s Paul Newman estimates that chlorine and bromine will not return to their 1980 levels until about 2065.