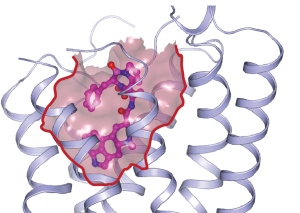 Two studies have decoded the structure of two of the brain's serotonin receptors. Here shown is a receptor known as 1B with the migraine drug ergotamine (pink) locked into one of its binding pockets.

Researchers have deciphered the molecular structures of two of the brain's crucial lock-and-key mechanisms. The two molecules are receptors for the natural neurotransmitter serotonin — which regulates activities such as sleep, appetite and mood — and could provide targets for future drugs to combat depression, migraines or obesity.

“This is huge,” says Bryan Roth, a neuropharmacologist at the University of North Carolina Chapel Hill Medical School, and a co-author of the two studies published in Science today1, 2. “Before this there was no crystal structure for any serotonin receptor. A lot of what was theoretical is now known with a great degree of certainty,” he says.

Scientists have been trying to decipher serotonin receptors for years. Armed with information on the atomic level, they might now be able to make breakthroughs in drug discovery and in understanding how the physical structures of the brain produce consciousness, says Roth.

Christoph Anacker, a neuropharmacologist at King's College London, agrees that the findings are important for drug discovery. “These receptors are involved in so many conditions, especially depression, and knowing the molecular structures will help to develop more specific drugs and avoid the expression of undesired side effects.”

There are 14 different known serotonin receptors. The molecules lie on the outer membranes of nerve cells; when drugs or neurotransmitters lock into the receptors from outside the cell, they trigger the release of other chemicals inside the cell. Those chemicals — which can be different depending on what drug or neurotransmitter has triggered them — activate further hormones and metabolites, producing signalling cascades that are ultimately responsible for many aspects of the way we feel, perceive and behave.

Some drugs bind at more than one receptor, setting off not-fully-understood reactions that can produce unwanted side effects. To avoid this, researchers want to fine-tune drugs so that they activate only the desired signalling pathway.

Roth and his colleagues uncovered the receptor structures using X-ray crystallography, in which X-ray beams are fired at crystals of the compound, and the structure is deduced from how the beams scatter.

The teams focused on two receptors, called 1B and 2B. They found that the molecules had very similar structures in the areas where serotonin docks.

But in one area of the 1B receptor, the binding pocket was wider than in the 2B receptor1. Although the difference was a mere 0.3 nanometres, about the width of three helium atoms, the difference is enough to explain why the two receptors bind differently to certain compounds.

This distinction may be relevant to drug safety: some drugs that activate the 2B receptor have been thought to cause heart problems3, and have been withdrawn as unsafe. The connection has earned the 2B the nickname of death receptor.

The researchers also investigated how differences in binding affected chemical cascades. They triggered both 1B and 2B with the powerful psychedelic drug LSD and one of its precursors, a migraine drug called ergotamine. The drugs produced two different chemical cascades — G-protein and β-arrestin — from the 1B receptor, but only one (β-arrestin) from the 2B receptor2.

Roth says that learning to control the cascades is likely to be crucial in maximizing beneficial effects of drugs and minimizing side effects. “In some cases G-protein signalling is good; arrestin is bad. In other systems, vice versa,” he says.

However, Anacker points out that serotonin receptors can have different effects depending on where in the brain they are located and other factors. “It would be too simple to say one cascade is beneficial and the other not,” he says.