Cellular proteins called septins might play an important part in the human body’s ability to fight off bacterial infections, according to a study.

Septins are found in many organisms, and are best known for building scaffolding to provide structural support during cell division and to rope off parts of the cell. However, most studies of septins, or guanosine-5′-triphosphate (GTP) binding proteins, have been confined to yeast cells. The latest research in human cells suggests that septins build 'cages' around bacterial pathogens, immobilizing the harmful microbes and preventing them from invading other healthy cells. 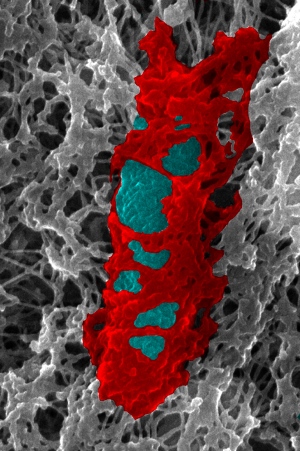 This cellular defence system could help researchers to create therapies for dysentery and other illnesses, the researchers say. “This is a new way for cells to control an infection,” says Pascale Cossart, a cell biologist at the Pasteur Institute in Paris, who presented the findings in a poster session on Sunday at the annual meeting of the American Society for Cell Biology in Denver, Colorado.

The researchers discovered the caging behaviour with Shigella, a bacterium that causes sometimes lethal diarrhoea in humans and other primates. To propagate from cell to cell, Shigella bacteria develop actin-polymer 'tails', which propel the microbes around and allow them to force their way into neighbouring host cells. To counterattack, human cells produce a cell-signalling protein called TNF-α. The researchers found that when TNF-α is present, thick bundles of septin filaments encircle the microbes. This, in turn, interferes with tail formation and stops Shigella in its tracks1, 2.

Microbes that become trapped in septin cages are broken down in a stage of the cell's life cycle called autophagy. “Autophagy is more efficient because of the septin cage, and the septin cage does not occur if you do not have the autophagy,” says Cossart.

The work “implies that septins are more dynamic than originally thought”, says Alexis Gautreau, a cell biologist at the French National Research Agency in Gif-sur-Yvette. Until now, he says, the function of septins in helping yeast cells to divide was well known, “but no one could relate that to mammalian cell physiology”.

“Septin’s role is pretty mysterious,” agrees Harry Higgs, a biochemist at Dartmouth Medical School in Hanover, New Hampshire. “The cool thing to me is that pathogenic bacteria have been so instrumental in figuring out how actin works, and this is the first sign that they will help to figure out how septins work.”

The researchers are now working to better understand the link between septins and autophagy, and to determine how important septins are in humans in vivo.

Previous studies3 have suggested that disruptions in septins and mutations in the genes that code for them could be involved in causing leukaemia, colon cancer and neurodegenerative conditions such as Parkinson’s disease and Alzheimer’s disease. Potential therapies for these, as well as for bacterial conditions such as dysentery caused by Shigella, might bolster the body’s immune system with drugs that mimic the behaviour of TNF-α and allow the septin cages to proliferate, says Cossart. “If you have a way to increase the number of cages, you have a new way to fight against infection,” she adds.