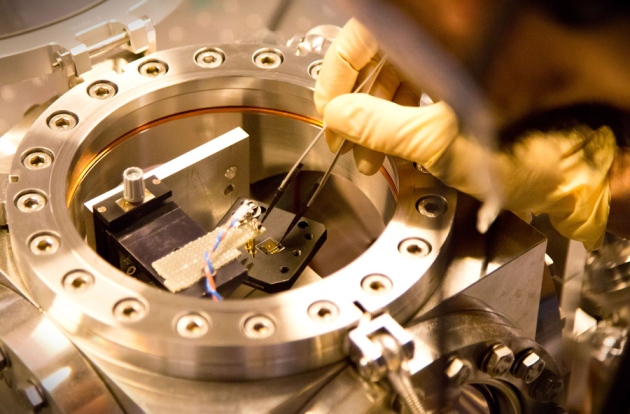 A low-noise device for converting radio waves into laser light is placed in a vacuum chamber.

Physicists have found a way to detect faint radio waves and convert them directly into signals that can be transmitted by fibre optics. The discovery could improve the sensitivity of detectors used in magnetic resonance imaging and radio astronomy, and help to connect future quantum computers into a network.

Radio-wave receivers use antennas to pick up radiation. The incoming waves resonate with the antenna and induce a changing electrical signal, which is then transmitted down a wire. Faint radio signals must be boosted by electrical amplifiers such as transistors, which introduce noise — extra fluctuations that, when amplified, can swamp the signal. The amount of noise present sets the limit of the detector’s sensitivity: The best amplifiers must be super-cooled to reduce the thermal vibrations that cause noise.

A team led by physicist Eugene Polzik at the University of Copenhagen’s Niels Bohr Institute has now created a detector that can turn radio signals into optical signals at room temperature, without the need to go through amplification. The device is already as sensitive as state-of-the-art electronics, says Polzik.

The key to the approach, described in Nature1 today, is a membrane of silicon nitride less than 200 nanometres thick, coated with aluminium and suspended over a gold plate. When an antenna picks up a radio signal, it creates an oscillating electrical signal in the circuit. This produces a voltage flicking back and forth between the aluminium and the gold, and the resulting attracting and repelling electrostatic forces cause the membrane to move in tune with the wave.

The device detects this motion by bouncing a laser off the membrane and measuring how the motion shifts the laser's light waves, explains co-author Albert Schliesser, also a physicist at the Niels Bohr Institute. This laser signal can be read out, and its accuracy is limited only by quantum fluctuations of the laser light, he says. Tests show that noise from the membrane is tiny: even at room temperature, the membrane adds 100 times less noise than super-cooled electronic amplifiers, says Schliesser.

Such low-noise conversion could find applications in radio telescopes, says Polzik: in particular on satellites, where cryogenic cooling is difficult. His team's device could help astronomers to “look at the sky and try to catch the tiniest signals from the cosmic background radiation”, he says. With further improvements, Schliesser says they could also apply the device to "deliver the clearest MRI scans ever seen".

Tero Heikkilä, a physicist at the University of Jyväskylä in Finland, says that the device could also be useful in the emerging fields of quantum computing and quantum cryptography, where information is carried by quantum bits, or qubits, made of photons or other systems that can encode two values at once. As a radio-to-optical converter, the device could enable computers working on radio-frequencies to send their quantum information down optical fibres. “The idea would be to make ‘flying qubits’ — photons — which would communicate and transfer information between two quantum computers working at radio frequencies,” says Heikkilä.

Francesco Massel, another physicist at the University of Jyväskylä, warns that the system is currently too inefficient for most applications: it successfully converts radio photons to optical light just 0.8% of the time. However, the set up is "definitely promising", he adds. “It is a nice system, but there is still some way to go for practical applications.”