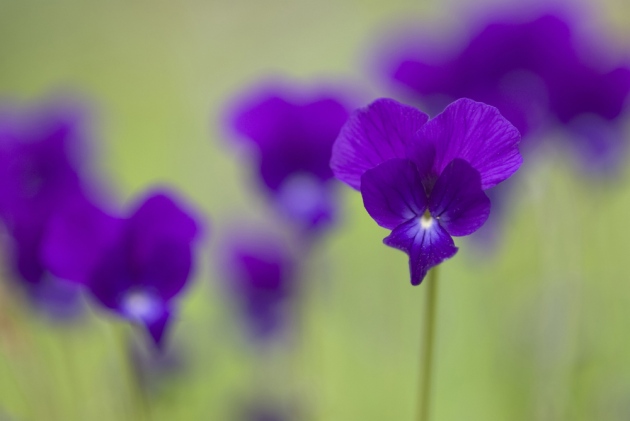 Although the genetics of smell are usually highly involved, people's ability to sense the distinctive fragrance of sweet violets (Viola odorata) has been traced back to a single gene.

When it comes to our sense of smell, we are all experiencing the world in very different ways.

Scientists already know that humans' sensitivity to smelly molecules varies considerably from person to person (see: 'Soapy taste of coriander linked to genetic variants'). But evidence that genetic variations — as opposed to habit, culture or other factors — underlie these differences has been hard to come by.

Geneticist Richard Newcomb of the New Zealand institute for Plant and Food Research in Auckland and his colleagues searched for olfactory genes by testing 187 people’s sensitivity to ten chemicals found in everyday food, including the molecules that give distinctive smells to blue cheese, apples and violets. They found that, as expected, the smelling abilities of their subjects varied. The team then sequenced the subjects’ genomes and looked for differences that could predict people’s ability to detect each chemical through smell.

For four of the ten chemicals, the researchers identified clusters of genes that convincingly predicted smelling ability, as they report today in Current Biology1. The study could not conclude whether similar genetic associations exist for the other six compounds, or whether factors other than genes play a role in those cases.

Previously, only five regions of the genome had been shown to affect olfactory ability when they undergo mutations, so Newcomb’s study has nearly doubled the number of genetic associations known to influence smell. And because there is nothing special about the chemicals they studied, Newcomb says that it is logical to think the findings would extend to lots of scents, meaning that people experience the plethora of chemicals surrounding them in endlessly different ways.

“All of these genes are on different chromosomes, acting independently, so all these different people — even just for these four compounds — are having totally different experiences of the chemical world through their sense of smell,” Newcomb says.

Newcomb also points out that knowing how genes determine olfaction could lead to the creation of recipes for food or other products that are tailored to an individual's molecular odour profiles.

Geneticist Doron Lancet of the Weizmann Institute of Science in Rehovot, Israel, has long advocated the idea that genes drive a personalized sense of smell, and he says that Newcomb’s work provides “highly revealing and convincing proof” that this is so. “For 20 years I’ve been saying that, one day, knowing the genetic consistency of a person, it could be possible to design a smell that’s suited to them,” says Lancet.

In the case of one compound — β-ionone, responsible for the fragrance of violets — Newcomb’s team even managed to pin down a single gene that can switch on or off a person’s ability to sense it2. This is only the third time an olfactory receptor has been traced back to one gene. The other known olfactory genes encode receptors for androstenone, a pig pheromone3, and for a grassy-smelling compound4.

The team's discovery of the gene coding for β-ionone will provide a pointer for researchers trying to solve the knotty problem of how nasal receptors bind molecules and produce the sensation of smell. “We know almost nothing about how olfactory receptors work,” says Newcomb.