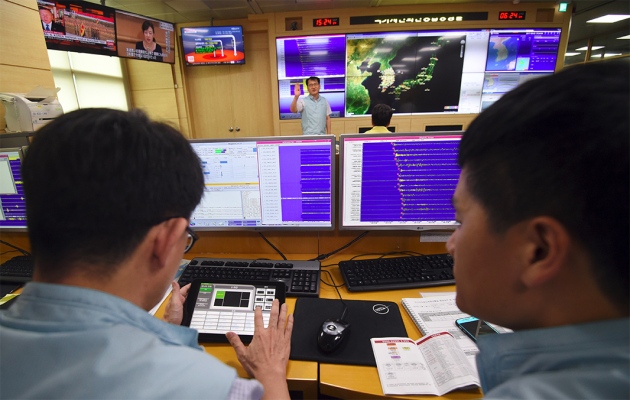 Eight-and-a-half minutes after North Korea set off a nuclear bomb on 3 September, a second burst of energy shook the mountain where the test had just occurred. More than a week later, researchers are still puzzling over what caused that extra release of seismic energy — and what it says about North Korea’s nuclear-testing site, or the risks of a larger radiation leak. Monitoring stations in South Korea have already picked up minute levels of radiation from the test.

A number of theories have emerged to explain the second event, ranging from a tunnel collapse or a landslide to a splintering of the rock inside Mount Mantap, the testing site. But seismologists can’t agree and say that they may not get enough evidence to pin down the cause.

“This is an interesting mystery at this point,” says Göran Ekström, a seismologist at Columbia University in New York City.

The nature of the first seismic signal is clearer because it matches the profile of a bomb blast. The US Geological Survey (USGS) determined the magnitude of the seismic event associated with the nuclear explosion at 6.3, whereas the Comprehensive Nuclear-Test-Ban Treaty Organization (CTBTO) in Vienna calculated it at 6.1 on the basis of a separate analysis. The explosion was many times the size of past North Korean tests and was the largest seismic signal from a nuclear test ever detected by the international network of seismic monitoring stations used by the CTBTO.

The second event came 8.5 minutes later and registered as magnitude-4.1, reported the USGS. The agency suggested that it was associated with the test and may have been a “structural collapse”. The possibility that the smaller shock was caused by a tunnel collapse inside the testing site has dominated discussion in the media. But Paul Earle, a seismologist at the USGS, told Nature that was just one possibility that was raised in the immediate aftermath of the explosion. The USGS, he said, was “basing that on previous nuclear tests of comparable size that had a collapse”.

Possible signs of a collapse are visible on satellite images taken of the testing site, according to an analysis released on 12 September by 38 North, a partnership of the US-Korea Institute and the Johns Hopkins School of Advanced International Studies in Washington, DC.

Satellite images before and after the 3 September nuclear test show evidence of landslides and a region of the mountainside that might have sunk.

But the seismic signal doesn’t match what would be expected from a collapse, says Lianxing Wen, a geophysicist at the State University of New York at Stony Brook. A collapse would produce mostly vertical movement of rock, but his own unpublished work suggests that the seismic clues point to a large horizontal movement as well, something he says would be more consistent with a landslide.

Although the satellite data do show a lot of landslides on Mount Mantap, other researchers argue that they could not have caused the magnitude-4.1 event. Much larger landslides, such as at Bingham Canyon mine in Utah in 2013, haven’t produced seismic signals close to that size, says Ekström.

He also argues that the seismic signals he has seen do not match the pattern expected from a landslide. Such an event would have longer-duration signals (matching the time that it takes rocks to fall down a slope) and fewer high-frequency waves (because the energy in a landslide is released more slowly than in earthquakes or explosions) than what was recorded in the North Korean event. He says that a collapse cannot yet be ruled out. The crater formed by a collapse sometimes does not become visible at the surface until much later.

Another theory comes from Ekström’s colleague at Columbia, seismologist Won-Young Kim. Kim rules out a collapse, a landslide and the possibility that there was an earthquake triggered by the explosion. He says that the seismic event was probably a rock burst — a violent fracturing of rock around one of the many tunnels under Mount Mantap. That could explain the frequency of the seismic waves, which were lower than an earthquake rupture but higher than a landslide, as well as the other features, he says.

The characterization of landslides and rock bursts could help researchers to assess how unstable Mantap is. Even if the whole mountain isn't going to collapse, as some have warned, subtler signs from landslides or rock bursts could indicate whether a major section of the mountain above the tunnels may have cracked. If so, that could lead to contamination of the mountainous area by radioactive material. “It is difficult to imagine how to contain that, given the altitude and remoteness of the place,” says Kim.

Stations outside of North Korea have started to detect radiation from the latest test. On 13 September, the South Korean Nuclear Safety and Security Commission in Seoul announced that several ground- and sea-based monitoring stations downwind of the test site had detected the radioactive isotope xenon-133, an indicator of a nuclear test. However, no other isotopes were detected, preventing a determination of what type of bomb was used. It also did not indicate whether radiation is leaking from the site at a higher rate than expected, said Cheol-Su Kim, the head of the environmental radioactivity assessment department at the Korea Institute of Nuclear Safety in Daejeon, South Korea.

Based on South Korea's ground-based network of reporting stations, overall radiation levels there ranged from 50–300 nanosieverts per hour — no higher than the country's background level.

With reporting by Mark Zastrow